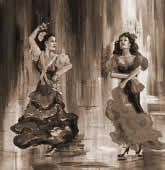 Whilst in Gibraltar in 78 I shared a flat on Main St with my mate Pete Wright, another branch member serving at RNH Gib.

We had a weeks leave due, so we took of to hitch hike around Spain for a bit - armed with sleeping bags and a few squids!

We took the ferry across to Algeciras and thought we'd kip on the quayside for the night.  A couple of armed Gendarmes turned up and persuaded us that this was not a good idea - onwards then!

If my memory serves we followed a route that took us via Cadiz and back again.  During this time we managed to drink copious quantities of Sangria and slept in a variety of peculiar places under the stars.

I remember a bar in some small village where we drank Sangria out of pint glasses, having not been impressed with the jugs with glasses as was tradition.  As we got progressively drunker I am sure a couple senoritas were taking a positive interest in us.  To drunk and language challenged to respond, we made our way back to where we had decided to kip for the night.  We crawled into our sleeping bags in the pitch black site of our choosing.

A particularly uncomfortable night was brought to an abrupt end in the morning with some foul smelling vegetables landing on us, having been lobbed over a fence from the camp site on the other side.  My discomfort was due to having pitched my sleeping bag onto a mess of animal bones lying in the rubbish tip we had been sleeping in!

We also managed to sleep in a large pipe of some sort or other and under a hedge, I think, in Cadiz city centre.  Now that's what I call roughing it!

I'm sure if Pete ever sees this he'll put me straight on any facts dimmed over time!