Ah, the Fruit Cake, a dessert with a horrible reputation. It has been around for centuries and was not always the butt of holiday jokes.

The earliest recipe from ancient Rome lists pomegranate seeds, pine nuts, and raisins that were mixed into barley mash. In the Middle Ages, honey, spices, and preserved fruits were added. Fruitcakes soon proliferated all over Europe.

It’s Me – Chapter 12
How to Develop an Educational App?
How to Boost Sexual Performance: 10 T…
Best Low Acid Coffees That Won’t Upse…
Remote Learning – What I’m Doing Befo…
Different sides of our family come from different tribes of the Fruit Cake. Let me rephrase that one style came from Venus and the other from Mars.
My husband's mother was known for her fruit cake. She made it in a loaf pan. It looked more like a rich yellow cake with a few nuts and fruits speckled about.

My father's family was just the opposite. The cake was not a cake, but more like a rich concoction of many fruits and nuts. It was held together with just enough batter to keep it from falling apart. It was naturally moist - well that and the brandy soaked cheese cloth it was wrapped in while stored in its tin. I can remember my Granny opening the tin every day or so and adding a bit more brandy to ensure it stayed moist.
Since 1902 a little town in south Georgia is known across the world for its fruit cake. The bakery was founded by Savino Gillio-Tos, an Italian in 1885. He first immigrated to New York where he worked as a master baker in a famous New York City hotel. Eventually made his way down south to finally settle in Claxton, Georgia. In addition to the fruit cakes, the company made ice cream, and other baked goods.
In 1945 he sold the company to an employee, Albert Parker, and retired. From that time on, the company focused on their fruitcake. Besides the fruitcakes being sold for friends and family, Claxton Fruitcakes became a popular fundraiser for different organizations. It was so well known, the dessert was featured in the 1965 World's Fair in New York City.

Loved or hated, the fruit cake has become the season's favorite foil. But through it all, it has endured. Rumor has it that there are several 100 plus year old cakes about. The public is fairly creative when it comes to this old cake. There is the Fruit Cake Toss. It has travelled into space. It is the ultimate gift to re gift. Comparisons have been made to bricks. Every family has someone "famous" for their personal Fruit Cake recipe.  And, that family member is 'generous' gifting a cake to everyone.
In medieval times it was discovered that soaking fruits and nuts in  a heavy sugary syrup made them much sweeter and quite colorful. It also preserved the fruits. That brought about a quandary - what to do with all those preserved fruits and nuts? Someone had the idea to throw them in a cake. Voila - the Fruit Cake was born.

A true fruit cake is heavy - very heavy. Someone did some research on its density and found that many recipes produced a cake with the same density as mahogany wood.
In the late 19th century and the early 20th century, the Victorians loved their fruit cake. Back then it was traditional that a wedding cake  was a fruit cake. Not only was fruit cake served at Queen Victoria's wedding but also at the wedding of Lady Diana Spencer and the Prince of Wales.

This tradition followed in another generation when Prince William and Kate Middleton served fruit cake at their wedding. However Prince Harry and Megan Marckle broke the tradition (of most royals) instead of the traditional fruitcake, they chose an elderflower sponge cake.
And perhaps all the jokes about old fruit cakes and it being a dessert that lasts forever are not jokes but in fact the truth. According to the Christian Science Monitor, a well made fruit cake stored in an airtight container can last for as many as 25 years and still be edible.
According to a 1983 New York Times Column titled "FruitCake is Forever" "Russell Baker claimed to be in possession of a fruitcake that a long-dead relative had baked in 1794 as a Christmas gift for President George Washington. Washington allegedly sent it back with a note explaining that it was “unseemly for Presidents to accept gifts weighing more than 80 pounds, even though they were only eight inches in diameter.” Still, the most bizarre element of the story was yet to come: Baker and his relatives were still gathering each year to saw off a tiny morsel of the fruitcake that they would then divide and consume."

But then there are some tall tales out there, such as the 108 year old cake that Pierre Girard uses as a centerpiece on his holiday table. 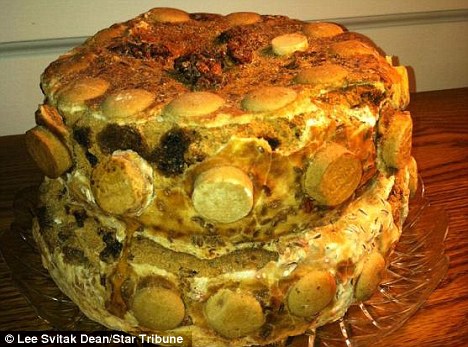 "The cake's history, aside from its being baked a few months before the Titanic sank, is shrouded in mystery. Two of Girard's friends, Audrey Staber and Dick Scheimo, found it on a St. Louis Park closet shelf while doing an estate-sale assessment in 1992. The elderly resident had died with no heirs, and Girard never learned her name before Staber and Scheimo subsequently passed away. [ ] the cake came in a box with cryptic inscriptions: Xmas cake Baked in dec. 1911" on top, 'Xmas Cake baked by my mother's brother Alex died Dec. 27. Was operated on Xmas day' on the bottom."
In 1985, Johnny Carson famously said on The Tonight Show, “The worst Christmas gift is fruitcake. There is only one fruitcake in the entire world, and people keep sending it to each other.” In a 1989, article for the New York Times, Dena Klein penned “Just in Time, a Defense of Fruitcake.” She wrote about William Greenberg Jr. Desserts in New York City. He was known to have said "the problem with fruitcake is not the cake itself but instead the too-dry, sickeningly sweet neon fruit that too many bakers cram into them." In his mind, the fruitcake is heavenly.

In an article entitled “Stop making fun of fruitcake!” Erika Janik said  “Despite what you see in grocery stores, candied fruits in unnatural colors are not obligatory and should, in my opinion, be avoided. Naturally sweet, dried fruits are the key.”
Surprise, surprise, surprise, December in National Fruit Cake Month, who knew? And mark your calendar - January 3rd is "Fruitcake Toss Day."

Staying Healthy Without The Gym (Or Not)