II Saint Paulo
The light of day showed that the boat in the pictures was indeed was not what we had boarded early in the morning. Don't get me wrong she was sea worthy and air conditioned. We could over look the worn sofas in the salon, the bunks with no sheets, or the cold showers (after all no one in their sane minds wants to take a hot shower in the Amazon.)

I wasn't sure what to expect to find on the river. I knew we would be visiting indigenous villages along the way, but would they be thatched huts or houses? Well, both. Some days we went without seeing anything. Then some days we would pass a small village. 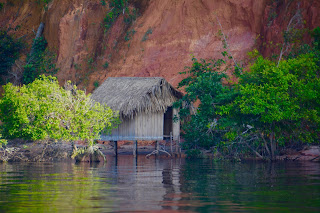 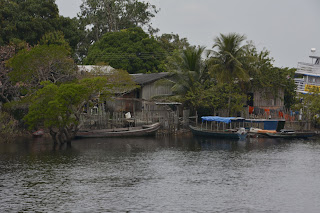 How to Keep on Running During the Pan…
No one should talk about integrity in…
Kestrel Lodge campsite
Can I consistently feel better?
All About American Colonial Interior …
One fear I had was that I would find the river chocked full of tourist boats. But I was shocked when we rarely saw any other traffic. The only exception were the boats the locals used to get from place to place, take their produce and goods to market, or lived on. 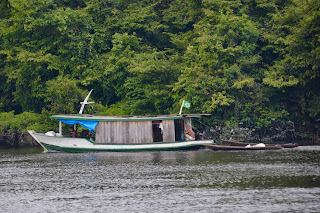 The one redeeming quality was Paulo, the chef. This wiry young Brazilian man prepared and presented us 3 meals a day that could easily have been found in a fine restaurant. Given the small one man galley he worked in and the number he fed at every meal, he was always prompt and friendly.
Paulo's menu came from a combination of fresh fish caught daily, the baskets of fresh fruits and vegetables kept on the stern of the boat and, often, beef and pork that he would braise and cook on a small outdoor grill. It was Served buffet style, generally a fish and a meat dish, always red beans and rice, 1 or 2 vegetable side dishes and/or salads.
Breakfast was scrambled eggs, several different types of breads and jams, a fresh cake (like a pound cake) every morning, and some bacon or sausage. Lunch was usually a lighter form of supper.


I quickly Learned to go to the buffet with a salad plate instead of a full size dinner plate, less I die of consumption from the generous selection of dishes. At first I thought of the wasted food, given there was so much. But what we didn't eat, the crew finished. 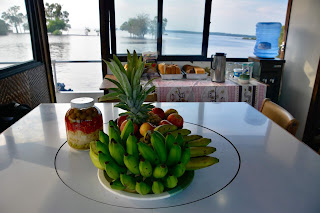 Everyone on board had a plastic bottle that they could fill from the chilled water dispenser. Other than that there was a cooler always stocked with mini cans of 2 types of Brazilian beer, Sem Sucre Cokes (Diet Cokes), and a native beverage that tasted like a combination of ginger ale and cherry cola (I was not a fan.) Red and White wine were served with dinner and on into the evening. I learned that Uruguay makes a great Pinot Grigio .
But what I did discover was Coke Espresso. Yes folks, in Brazil they serve 8 oz cans containing Coca Cola and Espresso Coffee. It is to die for. Stateside I can only find a 6 pack on Ebay for $35 plus $9.02 shipping. (I'm not THAT in love with it.) But I digress. 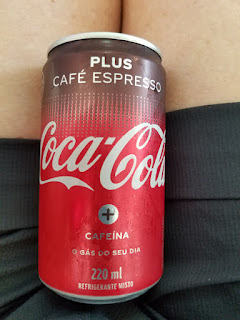 Paulo's best work was done every afternoon around 4 when he would appear in the salon or on the bow with a tray of freshly made, ice cold glasses of Caipirinha - Brazil's national drink, a fabulous concoction made with cachaça (sugarcane hard liquor), sugar, and freshly squeezed lime juice.
He served the cocktails with great pleasure and his trademark smile. Needless to say, there was usually more than 1 batch consumed every afternoon. Along with the drinks he would bring us a platter of meat, cheeses, and olives as an anti pasta.

One of my fellow travelers spent some time with Paulo one evening. Luckily both spoke Spanish. He learned that Paulo was the former cook for a Lord in London. That explained his art and skill in the galley.
We also shortly learned that Paulo served much more than just as a cook. If we needed anything or had any question, we would find him for assistance. Given some time, patience (for both parties), and broken English, we were able to communicate our question.

And, he always came through. Often it looked somewhat akin to charades. Usually with a flourish of his hands in the air to make his point or on his hips as if to say 'Seriously' or 'You've got to be kidding me'.

No one should talk about integrity in Pakistan cricket: Salman Butt