Not Sure What I Have

I dearly love my pups, Ellie and Marshall. For those of you who have followed me for years you know the stories of how they came into my life. But here is the rest of the story.
When I was first looking for a pup, I dearly wanted a Norwich Terrier. The breed had all the qualities I wanted - wiry coat, small, fiercely independent, affectionate, loyal, active, and a terrier. But when I started looking for one, I was amazed to find that there were only around 800 born each year in the country. Yes, that made them expensive. Yes, I had a budget. But I found that the breeders hired people to screen potential buyers before the breeders would talk to the buyers. You never spoke with a buyer, usually a person or a agency.

Warhammer: Chaosbane Review
International YA Translated into Engl…
Bad Start Thursday: Feline Foul Play
6 essential tips for sewing bias bind…
Video Clip of The Week: Wolf Alice, “…
Long story short, I finally found a litter in Dallas Texas. The price was something I could afford and the breeder had 2 pups left. My daughter at that time was living in Austin. She agreed to pick the pup up and bring it east next time she flew home. She wanted to be sure she knew what she was getting so I sent her pictures of Norwich puppies.
Ellie arrived and life has not been the same since. She is everything I always wanted or is she? Ellie was a tee tiny little thing when she arrived. 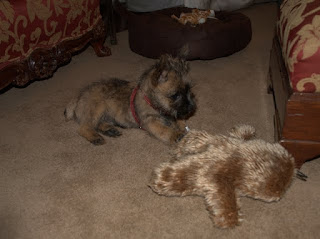 But then she started to grow, and became a grayish black, and she continued to grow. 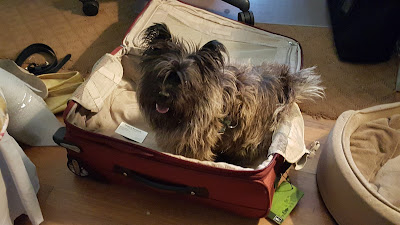 What was supposed to be a dog no larger than 12 pounds with an almost square build - 10" tall and 10" from the tail to the bottom of the neck became 17 pounds and a good 15 inches long. Upon some research I found that Norwich puppies and Cairn (Toto) puppies look very much alike. My DH started calling Ellie a "Norwhat". I am pretty sure I have a VERY expensive Cairn Terrier.
For Christmas this year I received two Dog DNA kits, so soon the mystery will be revealed.
As for Marshall, he is a rescue. He looks somewhat like a Skye Terrier (with short hair). Some days he resembles a very large Yorkie, who knows? But soon we will. 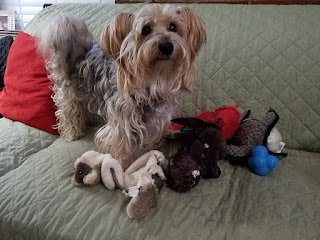 So we await the verdict, as to what I actually have. Not that it matters, I will adore whatever they are.

6 essential tips for sewing bias binding on a tight curve

Not Sure What I Have