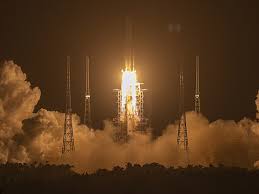 Just when the Russians and the Americans were feeling smug about their capabilities in the area of space China launched a rocket they called Chang’e-5, to space to collect lunar rocks from the moon. The launch was executed on November 24, 2020 from Wenchang, in the island of Hainan. The lunar lander was expected to land on the moon on November 27, 2020, and after collecting the rock samples the spacecraft is expected to return back to earth on December 16 or 17.

An anchor of an American TV Channel that I was watching smilingly said that China had sent a rocket to space to collect rock samples from the moon, 40 years after the Americans and Russians had done so, with their Apollo and Luna expeditions, respectively. I could not help noticing a hint of sarcasm from her tone, and her grinning face. She was trying to emphasize that China was 40 years late.

That sarcasm aside, China indeed seems to be moving stride for stride to catch up with the Europeans and western nations in every aspect, be it economy, weapons, agriculture, electrical and electronic products, all sorts of modern and state-of-the-art vehicles, even in sports and anything else that comes into your mind. You name it they have it. They have moved away from the stigma of being known a nation of backwardness and protectionism. I, when young, had been an ardent fan of old cowboy and western movies, and had watched and enjoyed many of those types of films. And in some of those films I had seen old Chinese men portrayed in shamble clothes slaving out for the cowboys in the saloons. Boy, in those old days the Americans really looked down on the Chinese!

Wow! How China and the Chinese have changed. Skyscrapers and other modern amenities are everywhere. China is now a nation with ultra-modernism and having somewhat some openness and accessibility,unlike before. The Chinese are everywhere in this world. Even the football jerseys of some European clubs have Chinese writings on them, advertising some products  They are imposing their presence, their culture in many parts of the world. 'China towns' had sprung out in many places outside China. Maybe, rightly so, as it is known to be the oldest surviving civilization in the world, commonly being said to be about 3500 years old. And it spreads.

Looking at China now, its motto seems to be ‘what you can do, I can do better. I hope it just don’t overdo. Better, maybe, but not overdo. You can ponder that one. Ha ha!