So it has now been a week since I set out on my mission to #GetStuffDone with Virgin Trains East Coast. If you read last Monday’s post you will know all about my desire to complete some tasks that have been sitting on the bottom of my to-do-list since before Christmas.

Slash Ft. Myles Kennedy & The Conspir…
Urban, Suburban, or Rural Practice: P…
15 Back To School Lunch Hacks You Nee…
Using Adobe Spark for Creativity in t…
18+ Adult Movies Of All Time To Fulfi…
I confess before I move on that it has been a struggle to get as much ticked-off my to do list, as both the boys were ill, I was ill, i had two days off work; one to spend the day with the wife at the cinema and the other to play golf. So between my lack of sleep, social life and a 9-5 job, this is what I managed to tackle this week:

Since our Wedding in August we haven’t been away,Partly because I was ill for three months, but also because we have been busy, naturally having two kids does that to you right?
At first we initially thought we wanted to attempt a short break to a city we have never visited before, however we quickly learned that we still had so much to do and see in London. Like the London Eye, London Bridge, Camden Mark, the Palace, The Lion King Show and a shed load of museums! Plus we had never taken the two year old to London overnight.. bad parents.
So after some deliberation we decided to do our research and shop for cheap trains tickets on virgintrainseastcoast.com. We played around with a couple of dates and times, which was easy to do just to get the cheapest deal, I think we got a bargain: 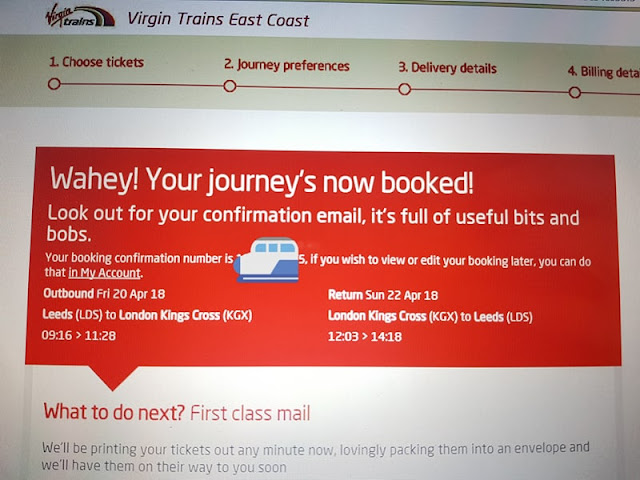 I also didn’t know that you can have the tickets delivered to your home, so you don’t have to visit the station on the day or beforehand to pick them up. It only cost and extra £1.

Sorting through the toy box

With my four year old having his Birthday in December and Christmas just passing, it seems that we have amassed a ridiculous amount of unwanted and unloved toys. It was my mission to clear out the clutter to free up some space and give the unwanted toys to our local charity shops.
The boys helps as you can see, they didn’t really mind having a good clear out:

It is time to sort through the toy boxes 😣

We will be binning the rubbish and broken toys, but giving the unloved ones to our local charity shop.

It has been over a year since I got my eyes tested. As I work on the computer from 9-5, then come home and occasionally write and tweet for the blog, I want to ensure I have the right lens and frames.
My two year old has also never had his eyes tested. So now seemed like the perfect time and whilst I was in town I nipped in to book an appointment for a couple of weeks’ time:

Every couple of months I have to get the marigolds out to give the main drain a good cleaning and I haven’t done it in such a long time! Not to be too graphic but that drain can get blocked, so pulling out the rods and the hose-pipe is a crap job that needed doing. I definitely get brownie points for getting it off my to do list on a wet and snowy day:

Cleaning-out the drains has to be one of the worst tasks on anyone’s to-do-list right?

Sorting through the sock draw

I have let my sock-draw get out of hand,In my defence I do get socks for every holiday and birthday! It has been years since I had a good sort-out and the results showed that my lack of tidiness, resulted a lot of unmatched socks:

Sorting out the sock draw and I have found 25 odd socks!!!

Do we have Borrowers in our walls?

What I didn’t get done
It is likely that I will ever find the time in one week to get everything on my to do list done, but I think that given a couple of weeks in time I can tick-off the following tasks:
1.    Cleaning and tidying the shed
2.    Sorting out paper work
3.    Arranging to donate blood
4.    Tidying and washing the car
5.    Defrost the freezer
So, that’s how I worked through my to do list this week folks. If I can offer any advice it would be to get your little ones involved as much as possible and block-out time in your diary for when you need to get tasks done. We use the FamCal app to keep track of our daily appointments, birthdays and events.