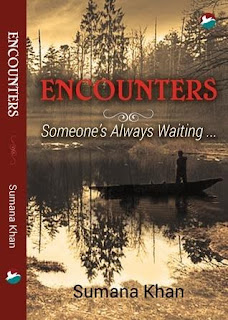 Sumana Khan was one of the first people I met when I started my writing journey around 6 years back and I probably owe it to her and the other folks I associated with back then for my not abandoning writing as a passing fancy and falling back to being a regular corporate coolie.  I have read, enjoyed and reviewed her first published novel 'Kaivalya', a paranormal thriller. So I had no hesitation in signing up when The Book Club offered up her second book 'Encounters' for review.

This time it is not a novel but a collection of stories with a paranormal connection. The book has her usual inimitable writing style that makes her stories an enjoyable read. I am usually not a big fan of regional flavors in writing and have almost always found it quite jarring. But Sumana manages to seamlessly blend a Kannada flavor into her writing that gives a local feel without ruining the flow of the narrative. Overall the language and narrative are excellent as are the descriptions of the people, places and cuisine, making the story a delightful read.

Coming to the stories themselves, let me start with 'Happiness Clinic', a version of which I had read back in 2010 when I had associated with the author. It is the tale of a frustrated old man who has spent all his life satisfying others. Now retired, he has lost his one source of validation in life - his job. The tale takes us on his journey through the dreary desert of despondency, the jungle of sorrow and river of disappointment to finally reach the meadows of peace and contentment. This was my favorite story in the book. I found the story significantly improved from the version I had read back then. Kudos to the author for taking efforts to refine the story further.

'Best friends forever' was the one I read next. This is a regular spooky tale of a girl who supposedly has visitations from the spirit of a long dead British child. The protagonist is a psychiatrist who attends to the girl. The psychiatrist realizes that this is no ordinary case and he has to go beyond the realms of mainstream psychiatry to crack this case. The story weaves seamlessly through the past and present bringing before us a myriad of interesting characters.

'First Love' is a strong story, placed strongly in the realm of urban fantasy. It is the tale of woman seeking to break through the bonds society places on women to achieve her professional dreams. The story also has a paranormal theme of tryst with a daemon lover, who supports her in her struggle against overpowering odds. Will she realize her dreams? And what about her daemon lover? Does he really exist or is he just a figment of her imagination. Read the story to find out.

'The storyteller' is an interesting tale of a town, its inhabitants, their trials and its tribulations. 'Reminiscence' is the story of love between an old man and his wife. Both are well narrated tales with twists in the end. While the narrations were interesting, the twist did not really have that wow feeling. Of course the twists were not predictable but I did not find sufficient build up in the main narrative for the twist to be a real knock out as such. Also I did not find much novelty in the nature of the twist - I found it to be a regular formulaic one. So I would say these two are the weakest stories in the collection purely from the paranormal and thrill perspective.

In addition to being entertaining, each of the stories address several social themes. Many of the stories having social themes neglect the entertainment and tend to get preachy or depressing. Sumana's stories on the other hand are interesting stories in themselves while the message is delivered effortlessly as the reader navigates through the story. While the stories have darkness which one may come to expect in paranormal stories as well as in stories related to social evils, all of the stories strike some kind of an optimistic note in the end.

Overall I would definitely recommend this book to anyone looking for quick reads that despite being light and entertaining, maintain a good level of language and narration and manage to pack a punch.

Links to where book can be found - Goodreads, Amazon, Flipkart, Cinnamon Teal

Empire of Language- Prelude-Metaphors…
7 reasons I’m tired of being tired
Exhibit A: Old photo albums
8 Places to Drink Coffee in KC that …
Can CBD oil be addictive?