I wrote about my first Twenty Books of the year early in March. The next set of twenty books was completed late in May. It was at the end of May that my son and his family arrived to stay in our guest flat for three months. During that time, I got very behind on reviewing books. I mostly kept up - with only a few days' lag - until I went away for a couple of weeks in July.  After that, I kept note of when I had finished each one, but I wanted to spend as much time as possible with my grandchildren while they were here, and by the time I had an hours or two myself in the evening, I was too exhausted to do anything constructive.

Moreover, I didn't do much reading for myself, other than ten minutes or so before going to sleep each night. So I thought I was going to be lagging seriously on my 100-books-a-year challenge on Goodreads. Then I realised that I could review the longer books I was reading to David. I didn't want to review shorter picture books - some only take five minutes to read, even though many are delightful - but he likes shorter chapter books too, the kinds with line drawings every couple of pages, so I decided to count that too. Which means that my third set of twenty books is rather unbalanced, with an abundance of children's books, and not much else...

As with the earlier posts, links to my full reviews of each book (on my book reviews blog) are given. 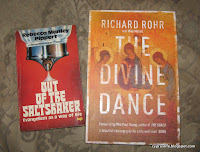 I'm surprised and quite pleased to find that I did manage to complete four Christian books in this period, as I have done previously, even if it was over nearly three months rather than four, and one of them was very short....

The first was on my Kindle, 'The Beloved Disciple' by Beth Moore. It's a lengthy study of the Apostle John, written in devotional style to be read over a couple of months. I liked parts of it, but found it a bit too informal and culturally American for my tastes.

After that, I read 'The Divine Dance' by Richard Rohr, which I had been given for my birthday.  Very readable, interesting, and also reassuring. I had moments of wondering if the author was veering a bit too far into non-orthodox belief, but my gut feeling is that he stayed just inside the line. One I'd like to read again fairly soon.

To contrast with that new, somewhat mystical book I then opted for what is now almost a Christian classic: 'Out of the Saltshaker' by Rebecca Manley Pippert. Written at the end of the 1970s, the contrasting cover style is shown rather clearly in the photo above. The contents are very good, though inevitably somewhat dated.

The fourth Christian book I read over the past three months is a very short one: 'Waking Up' by Ted Dekker, which I read on my Kindle. It's a biographical account of the author's struggles with his faith, and how he moved on to a newer appreciation of life as a believer.

I read nine novels intended for adults in my first twenty books of the year, nine in my second twenty... and just six in this third batch. I always have a novel of some kind to read before going to sleep at night, but it evidently took me rather longer than usual to read most of these. In addition, they were interspersed with some teenage novels, listed below.  They're all fairly light-weight, as I wasn't awake enough for anything too deep.

'The Christmas Promise' by Sue Moorcroft was the first one I completed in this period. It would have been ideal to read in the Christmas season, but I was given it for my birthday, and couldn't resist. Good characters, interesting plot.

'Belonging' by Alexandra Raife was next. Warm characters, a nice pace, and a hint of mystery that kept me turning the pages.

I then embarked on 'The Holiday' by Erica James. It was with some reluctance, as I hadn't much enjoyed it the first time I read it. But I'm slowly re-reading books by my favourite authors, and thought it only fair to give this another chance. I'm glad I did, as I liked it much more this time.

Wanting a change from contemporary women's fiction, I next read Agatha Christie's 'The Mirror Crack'd from Side to Side', which I enjoyed very much. It features Miss Marple, and an intriguing plot set in a small village.

By the time I'd finished that, I was about to leave for my UK visit, so I picked something from my Kindle: 'The Incomplete Amorist' by E Nesbit. Set over 100 years ago, it was pleasant light reading although I didn't feel it was as good as the author's better-known children's books.

The final book I read that was intended for adults is 'Anna's Return' by Sally Quilford. A novella rather than a novel, it is set in the middle of the 20th century with references to the war, and I liked it very much.

Teenage Fiction
This category involves the books I read interspersed with the novels above, at bedtime; some are for older children (8+) rather than just teenagers, but I enjoyed them anyway.  I read three of this category in my first twenty books, three in my second twenty, four in this batch:

The first one I read in this period was 'Little Women' by Louisa M Alcott, a book I loved when I first read it, probably as a child, and which I've re-read many times over the years. Pure indulgence, and I enjoyed it very much.

I followed that, a week or two later, with 'Meet the Austins' by Madeleine L'Engle. I hadn't read this book before, as far as I recall. Not a whole lot of plot, but a pleasant light read with very well-drawn characters.

Chalet School books are one of my first choices of comfort read, so it's no surprise that I also read Elinor M Brent-Dyer's 'The Chalet School Reunion' during this busy period. Fiftieth in the original series, this is about families and friends connected with the school, rather than being a school story as such. Very enjoyable.

The fourth book in this category was on my Kindle while travelling: 'Of Wheels and Witches' by Stephen Hayes. A very interesting read, set in the apartheid years in South Africa, featuring some children having rather dangerous encounters and adventures.

The first book in this section is one I read to some young friends, over several weeks, and finished just before my grandchildren arrived. 'The Exiles' by Hilary McCay features four girls sent to live with their grandmother for the summer, and I very much liked reading it aloud. My friends enjoyed it too, partly because three of the girls were the same ages as they were.

The first short chapter book I read to my grandson was 'Help!' by Margaret Gordon, a book, along with those below, which I found at the local thrift store. It's about two young pigs who live in a block of flats with their extended family, and who are determined to be helpful... unfortunately it doesn't always work that way. Amusing in places, each chapter complete in itself.

'TJ's Sunflower Race' by Rose Impey is a delightful story intended for early readers, but it works very well as a read-aloud. Lovely line drawings, and if the ending is predictable, it's very nicely done with a bit of humour here and there too. We read this one aloud several times...

'Lollipop Days' by Margaret Nash is about a friendship between a rather mischievous girl and a somewhat more ordinary boy who live near each other.  Not particularly exciting, but quite a nice set of stories, probably intended for about age 5-6 as later chapters involve school.

Roald Dahl's 'The Giraffe and the Pelly and Me', in a large format with colour drawings by Quentin Blake was a wonderful find. The story is (unsurprisingly) bizarre, but not unpleasant, and my grandson loved it. I don't know how many times one or other of us read this thing aloud in its entirety. There are no chapter breaks, so we just kept going...

And finally, at least for this batch of books, another by Roald Dahl. Not as enjoyable as the previous one, my grandson also very much liked 'George's Marvellous Medicine'. It involves a boy concocting a potion to replace his horrible grandmother's medicine, with unexpected results.

(I actually completed this batch of books on August 8th and have read another seven books since then, including one of the ones which I mistakenly included in the photo for this category - but I'll mention it, along with the others, when I've completed my next set of twenty books for this year. )

It’s Me – Chapter 12
Bed Bugs Bites? – Find Out With This …
Sex on Your Period – Reasons to Do It
Spider-Man: If This Be My Destiny - L…
How to Develop an Educational App?