Changing our phone/internet provider, and a surprising consequence

Tags: router wireless router mobile phones phone shopping backache realised cyta richard shopping trolley
March 19th 2016
View original
Back in October of last year, I wrote a post called 'Images of autumn', which was a rather pretentious-sounding title for what was essentially a summary of several unconnected occurrences which I had not got around to writing about.

Amongst them was this picture of my newly-reorganised study, except that I have managed to add a little arrow near the bottom left: 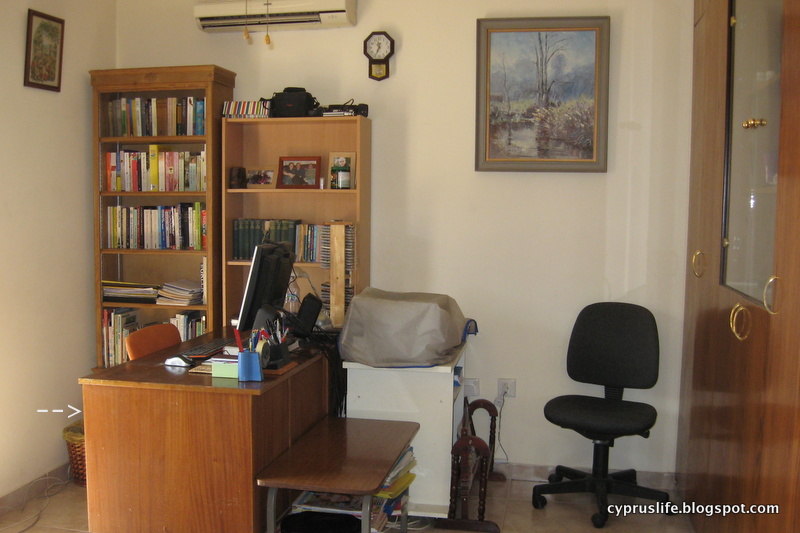 The arrow shows where our wireless Router was put, beside the tall bookcase, connected to the cables that can be seen (if you enlarge the photo) running untidily along behind my chair.
A couple of months ago, Tim was looking at the costs of various Phone companies that now operate in Cyprus, and commented that we could save ten euros per month AND have faster speed if we switched from CYTA - the national company - to Cablenet. We would also, for the first time, get access to cable television. Not that we watch any television, but the occasional news broadcast might be nice, and there was no package that did not include this.
Various people had experienced good things with this company, so we went to enquire, and made the necessary arrangements. Richard and Tim spent a lot of time deciding how the house could better be wired, and said that the router would have to be behind our television.
The workmen arrived when they said they would, and after doing some noisy drilling and installing, followed by some tweaking by Richard and Tim (this is about as technical as I get) we now have this arrangement: 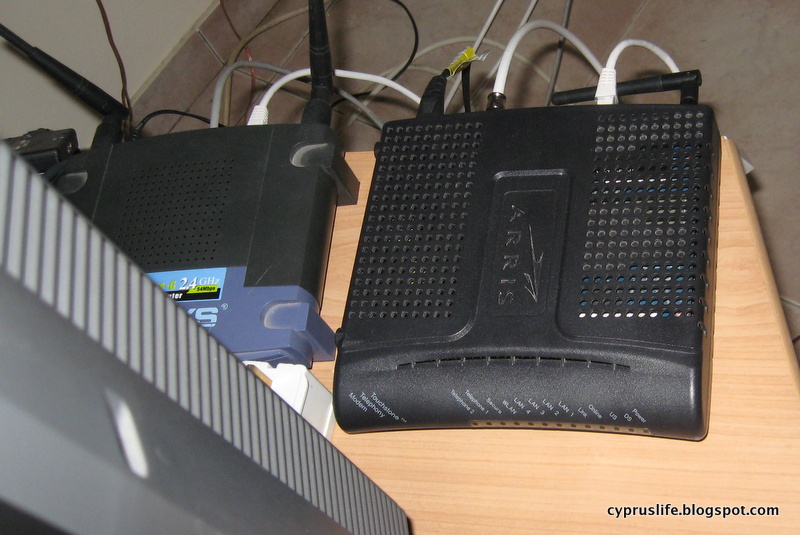 And this is what we see on the wall behind: 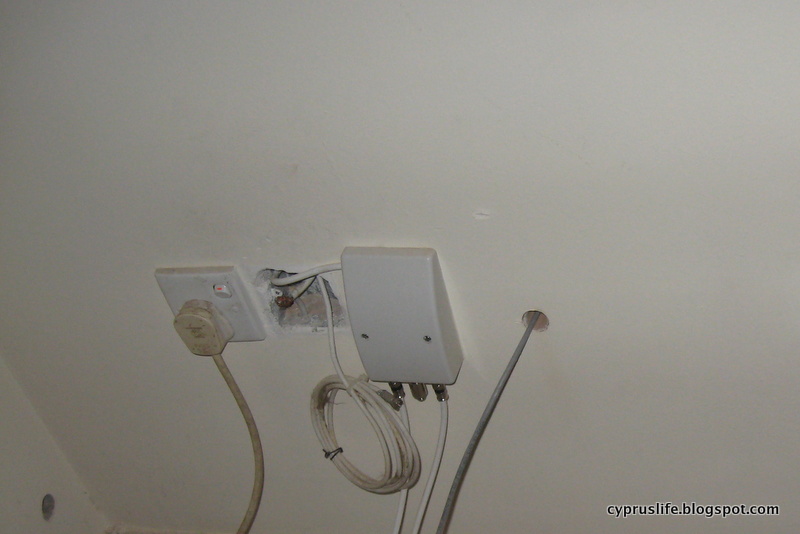 The television, bizarrely, only shows us black-and-white pictures, because (apparently) there's something wrong with it, or perhaps it's too old (all of seven-and-a-half years), but no worries. Cablenet Internet works, and Richard returned the CYTA router at the end of last month. If CYTA ever manage to get their act together, our phone - on the same number - should work on Cablenet too.
Meanwhile, on an entirely unconnected subject - or so I thought - middle age has been creeping up on me. Last October, a few weeks after I re-started my walks with Sheila, I Realised that I was getting Backache. I put it down to carrying a heavy belt-bag with my purse and camera, so I stopped taking it. This helped slightly, but I still found my back was aching very badly any time I had been Shopping, or if I spent more than about half an hour standing in the kitchen.
I tried heat, I tried stretching, I tried wearing different shoes. Most of the time it was chronic rather than seriously painful, but there were moments when the twinges meant I had to sit down. Buying a Shopping Trolley from Lakeland made it easier to do the shopping, and we started getting most of our groceries by car on Fridays.
But still, my back ached almost continually. I became gradually resigned to it, moving more carefully, doing less in the kitchen, carrying nothing I could avoid.
A couple of weeks ago, I suddenly realised that my back was not aching. I stood in the kitchen doing various things, and was entirely without pain. It seemed so unusual that I commented on it; I assumed it was a temporary reprieve from the back pain, but it continued. I had not realised quite how continual the ache had become  until I was without it. I noticed it as I came downstairs, as I sat on the floor to put my shoes on, as I got up from my beanbag, as I was able, once more, to do things in the kitchen for an hour or more.
This happy state of affairs has continued. There's still a bit of an ache when I wake in the mornings; I suspect we need a new mattress, or at least a mattress topper. But it goes within a few minutes. And that's it for the day! I've had no painful twinges, and moving is, once again, easy. I'm still avoiding any heavy lifting, and I'm using my shopping trolley - no point taking unnecessary risks - but I am very much appreciating having a back which no longer aches almost continually.
A few days after my backache so mysteriously vanished, we were talking somewhat about electromagnetic sensitivity: a long name for an increasing condition, where people are (or become) sensitive to Mobile Phones, or wifi devices. I have never liked mobile phones - in the early days they all gave me a tingling sensation in my hands, almost like a mild electric shock - and although modern ones are better, I still have a problem with smartphones, or even my Kindle when the wi-fi is switched on. We used to think I was some kind of over-sensitive freak; in recent years we have met more and more people with the same kind of sensitivity.
Then, idly browsing on the topic, I came across this article about electromagnetic sensitivity. Symptoms are far wider than a bit of tingling. I browsed some more, and found a surprising number of anecdotes about people who had aches and pains of all kinds, often headaches, which disappeared as soon as a wireless device - or router - was moved further away.  The 'problems' seem to happen when a device was closer than a metre to a sensitive person.
And, yes... this is where the diverse topics of this post converge. When we thought about it, we realised that the day my backache vanished so unexpectedly was the same day that Richard took the old Wireless Router back to CYTA. The one which had been about 60cm away from my back whenever I sat at my desk. Which is at least two or three hours per day, often more.  Prior to my re-organising of my study (and prior to my backache) the router had been in a small unit about a metre and a half away from me.
Anecdotal only, of course. Anecdotes, as Tim has reminded me, do not constitute research. Nonetheless, it seemed to be a good idea to add my experience to the pool. If anyone who happens to see this has unexpected aches or other symptoms, and spends much of their day less than a metre from a wireless router (or smartphone/tablet) then it would do no harm at all to try a few days without it - and might, just possibly, make a difference.

Changing our phone/internet provider, and a surprising consequence