Strange sounds from a distant star. 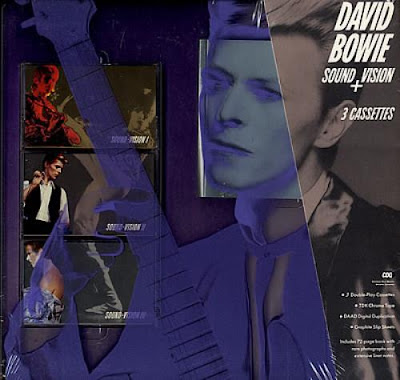 I still remember getting the Sound + Vision box set* for Christmas in 1989, a precursor to a large reissue project centered around David Bowie. And it was a glorious collection of Bowie tracks—some popular, many rare—held on a bunch of cassette tapes.

Yup, cassettes. I didn’t make the leap to CDs for another few years. They were so much more expensive, and that didn’t even take into account how much you had to shell out for the CD player itself! Plus, it would be quite a few more years before CDs went mobile via the Discman.

I spent the next couple of years waiting eagerly for the next batch of Ryko reissues of Bowie's catalog from the ‘60s and ‘70s. Before then his earlier stuff was pretty hard to find since it had been out of print. So I had to make do with cobbled together mixtures and the occasional vinyl find. I was finally Abe to enjoy his catalog in all it’s glory!

Most of the reissues had bonus tracks. And I admit when a number of them would be released on the same day I’d go after the ones with the most tracks. Money was tight so choices had to be made! Sometimes it would take months to get my reissue collection up to date! But these were also the days where one would consume a single album over the course of weeks, playing it over and over again until it’s grooves became part of your DNA and coursed through your body, headily rushing through your blood, bypassing your head and going straight for your heart.

Years later I would obsessively collect all the Ryko reissues on CD, not ever even considering that at some time they too would become out of print.** Some Bowie fans complain about the sound quality on them but I don’t mind it. Sure, somewhat confusingly, the original RCA CDs have a warmer sound than the Ryko ones but it’s really not that much of a difference.

A couple years ago I realized these CDs were getting pretty beaten up from the bajillion times they had been played so I ripped them into lustrous 160 kbps M4As.*** And then because I am an obsessive I took all the bonus tracks and assembled them into a single compilation—even going so far as to create unique digital art for it—which I saved down to a hard drive and then forgot about.

I rediscovered this arrangement of tracks last night and spent all morning today listening to it. It has the effect of creating a discography from an alternate Bowie universe when you consume them all together. Some of the hits are there, but instead of "Ziggy Stardust"stomping all around it’s a folky ballad, and “John, I’m Only Dancing” loses its glittery snobbery and gets a disco remake. The songs span from 1969 through 1980 and when taken all at once really does create a wonderful experience that feels like it’s being piped in from another universe.

It’s been a nice way to lose myself in a reconstruction that allows me to experience the music in a way that’s a little foreign.**** I think I need to try and find time to do stuff like that more often since it really helps soothe and center me.

A tiny sonic oasis in troubling times, if you will.


*EMI updated the Sound + Vision set in 2003 to bring it up-to-date through the late ‘90s. It was interesting but the original collection will always be my favorite.

***Don’t judge the lower bitrate. Space was at a premium on my iPod at the time!

****Sometimes I can get this effect by throwing the whole Bowie library into a playlist and hitting shuffle. But this was even more interesting because by playing these outtakes and rare tracks in chronological order it really did feel like they were telling a story.

Strange sounds from a distant star.