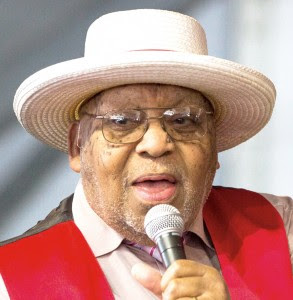 Ellis Marsalis
The Louisiana Weekly
April 6, 2020
By Geraldine Wyckoff
Contributing Writer
Ellis Marsalis believed in music, education, family and reflective thinking. He applied those credos as an accomplished jazz pianist, bandleader and composer, a dedicated teacher and a hard working man raising his six sons with his wife of 58 years, Dolores. Marsalis’ influence spread throughout the globe through his highly successful sons, saxophonist Branford, trumpeter Wynton, trombonist Delfeayo and drummer/vibist Jason along with the many students with whom he shared his knowledge and wisdom. The piano great, whose sons also include poet/photographer Ellis Marsalis III and Mboya, was a humble and much respected man of great integrity. Ellis Marsalis died on Wednesday, April 1, 2020 at the age of 85.

Long Island Sounds June 2019
Google Introduces Duo of New Pixel Ph…
What Effect has Breaking Bad Had on C…
ON TRIAL - Paul Manafort
Video Clip of The Week: Wolf Alice, “…
“There’s no logic to how I got into music,” said Marsalis in a 2014 interview explaining that neither of his parents played an instrument. “There was only one radio station in the city of New Orleans and its call letters were WJBW and I listened to that whenever I could.”
Marsalis offered that maybe the Gert Town neighborhood where the family lived before moving to Jefferson Parish made a subliminal impression on him. “Later on, I realized our landlady’s brother, Narvin Kimball, played bass and banjo. Papa ‘Albert’ French lived in the middle of the block where we lived at 1300 Telemachus Street. I didn’t know any of these people at the time – I was only 10 years old. I’m just a survivor in this,” Marsalis said in a 1990 “JazzTimes” feature story. “I didn’t design any of this and most of it wasn’t supposed to happen anyway. I don’t really consider myself a success; my children are successful because what they did was by design.”
In 1944, his father, Ellis Marsalis Sr., purchased some property at River Road and Shrewsbury Road in Jefferson Parish and a guy suggested that he build a motel. He went for that idea and it grew from four or five rooms to 35.
“It became a place for people who knew about it because in those days Blacks couldn’t stay downtown,” Marsalis said. “Martin Luther King stayed there and Ray Charles’ band stayed there. My daddy was somebody who didn’t want to work for nobody,” Ellis noted. “I think that’s why I always wanted to have my own group like he always wanted to have his own business.”
Marsalis certainly accomplished that goal drawing crowds to his 30 years of gigs at Snug Harbor and recording multiple fine albums under his own name. As a pianist, Marsalis was highly influenced by beboppers and often brought smiles to those in the know when, in old-school style, he’d throw in quotes from familiar jazz classics. Marsalis was a modernist who captured audiences – minus flash – through the sheer purity and beauty of his playing, especially on his original tunes like “Syndrome,” that has become a part of the New Orleans modern jazz songbook. The pianist would also often return to his longtime affiliate, drum master and composer James Black’s “Magnolia Triangle,” keeping it vital and bringing it to new audiences.
At the 2019 Satchmo Summer-Fest, Marsalis – wearing his red vest for the occasion – gained the admiration and turned the ears of many folks whose first love was for traditional jazz. There were cheers all around for Ellis Marsalis, an artist who obviously believed in music.
A young Ellis became infatuated with clarinetist Artie Shaw after hearing him on the radio. He began playing the instrument at age 11. Marsalis’ formal education started when his mother enrolled him and his sister at the Xavier University Junior School of Music, a preparatory institution. There he met many people who would play an important part in his musical life. “Edward Frank (known later as an exquisite jazz pianist) was playing violin in the orchestra and Germaine Bazzle (now a renowned vocalist) was playing the string bass,” he recalled.

What Effect has Breaking Bad Had on Crystal Meth Abuse?

How to Grow Your Business with Growth Hacking

Who Looked More Bangin At All The Poppin’ Golden Globe Pre-Parties?

Bonnie and Clyde – The Real Story