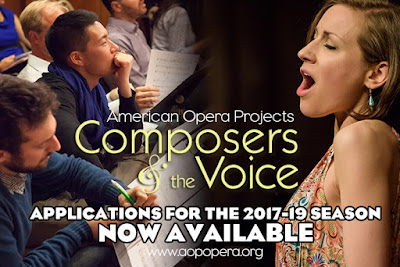 APPLICATIONS NOW AVAILABLE FOR 9TH SEASON OF
American Opera Projects (AOP) announces the return of its popular Composers & the Voice program for its 2017-19 seasons. Created and led by Composers & the Voice Artistic Director Steven Osgood, eight composers and librettists will be selected for two-year fellowships to learn the fundamentals of writing for the voice and opera stage. Workshop sessions with professional opera singers, mentors, and instructors are held at AOP's home base in Fort Greene, Brooklyn. The deadline for applications is April 28 with fellowships announced by July 1.
The Composers & the Voice fellowships include a year of working with the company's Resident Ensemble of Singers and Artistic Team followed by a year of continued promotion and development through AOP and its strategic partnerships. The workshop sessions between September 2017 and April 2018 include composition of solo works for six voice types (coloratura soprano, lyric soprano, mezzo-soprano, tenor, baritone, and bass).
In addition, over 45 hours of "Skill-Building Sessions" of acting courses with director Mary Birnbaum (Die Zauberflöte at Juilliard), theatrical improvisation led by Terry Greiss (Co-Founder, Ensemble Actor, Executive Director of Irondale Ensemble Project), and libretto development with Libretto Writing Instructor Mark Campbell (librettist, As One, Silent Night), will provide in-depth knowledge of how singers build characters, act in scenes, and sing text.
"The philosophy of Composers & the Voice since its beginning has been that by immersing composers and librettists in hands-on work with skilled singers and music directors, we empower them to create groundbreaking works that are true to each of their artistic languages," says Osgood.  "Composers rarely have the opportunity to work with opera singers during their training, and C&V was designed to address this void. I could not be more proud of the commissions and premieres that have flowed to the alumni of C&V."
Fellows will also receive individual guidance from "Artistic Chairs," sponsorships named in honor of mentors and their support of Composers & the Voice. Artistic Chairs for the upcoming season include composers Ricky Ian Gordon (27, The Grapes of Wrath), David T. Little (Dog Days, JFK), Missy Mazzoli (Breaking the Waves, Songs From the Uproar), Tobias Picker (An American Tragedy, Emmeline), Stephen Schwartz (Wicked, Godspell), and Gregory Spears (Fellow Travelers, Paul's Case), and librettists Gene Scheer (Cold Mountain, Moby Dick) and Royce Vavrek (Dog Days, JFK).
Since launching in 2002, C&V has fostered the development of 54 composers & librettists. Alumni works that went through AOP's opera development program and continued to a world premiere include Love/Hate (ODC/San Francisco Opera 2012, Jack Perla), Paul's Case (UrbanArias 2013, Gregory Spears), The Scarlet Ibis (PROTOTYPE 2015, Stefan Weisman), and three in 2017 - Three Way (Nashville Opera and AOP, Robert Paterson), The Summer King (Pittsburgh Opera, Daniel Sonenberg), and Independence Eve (UrbanArias, Sidney Marquez Boquiren).
Complete information and applications at: www.aopopera.org/composers_voice