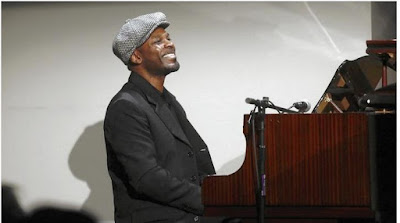 Silent Cry Inc. Hosts Investment Day …
Where Mount Rushmore is Located
New York Times Crossword August 17 20…
The Jackie Robinson's Nike Dunk Low -…
Unveiling of the Henrietta Lacks stat…
December 3, 2016
It was one of the most joyous concerts of the year.
Two exceptional pianists. Two state-of-the-art pianos. And music by composers who span the history of ragtime.
Considering that the performers in question were Chicago ragtime innovator Reginald Robinson, a MacArthur Fellow, and Jon Weber, his mentor and longtime champion, it's no wonder the recital hall at PianoForte Studios was packed Friday night. The two men hadn't performed together in more than a decade, and each possesses an encyclopedic knowledge of historic repertoire, as well as a ferocious command of the keyboard.
Put them together on a stage, and you're bound to hear how an all-American genre that emerged more than a century ago ought to be played.
Robinson and Weber devoted most of the program to scores by the most revered figure of classic ragtime, Scott Joplin, and the most significant composer of the music today: Robinson. Though the evening also included snippets by Fats Waller and George Gershwin, the focus on Joplin and Robinson afforded listeners proof of the genius of the art form and its enduring vitality in Robinson's work.
From the first notes of Joplin's "The Entertainer," published in 1902, there was no doubt that the music — so often exaggerated in film and TV scores — was in four unusually capable hands. Though arranged here for two pianos, Joplin's masterpiece conveyed all the rhythmic bounce and melodic grace the composer conceived for a single instrument.
Better still, Robinson and Weber made clear the underlying structure of this music, applying different tonal colorings to each section and bringing forth motifs often overlooked by lesser pianists. In effect, Robinson and Weber revealed the inner workings of this music.
Not many contemporary ragtime works would sound very compelling following "The Entertainer," but most of Robinson's vast catalog does. "The Strongman" (1990) immediately proved the point, the composer having compressed copious melodic invention into classic ragtime form. Though Robinson has played his early opus frequently through the decades, it benefited considerably when articulated by two pianists. Weber provided low-note ballast to Robinson's middle- and upper-register flourishes, "The Strongman" never sounding more muscular.
Each of the subsequent Robinson works on the program conjured a world of sound unto itself. The tender lyricism of Robinson's "Petunia Rag" (1989) stood in sharp contrast to the keyboard wizardry of his "The Tomahawk" (1996). The modernistic, chromatic chord progressions of Robinson's "The Jester" (1991) hardly seemed to come from the same pen that produced Joplinesque figures in "Struttin' Your Troubles Away" (2013).