Fort Wayne News-Sentinel: 'Ain't Misbehavin' opens at First Presbyterian Theater [A musical tribute to the black musicians of the 1920s and 1930s.] 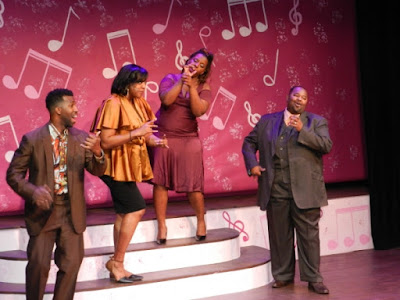 By Barb Sieminski, [email protected]
Roll back the years to the 1920s when jazz was king and people thrilled to the syncopated rhythms of various musicians in cabarets and theaters. One of the most acclaimed American jazz musicians of the time was Thomas Wright “Fats” Waller (1904-1943), who climbed the ladder of fame during the Harlem Renaissance.
A multi-gifted singer, pianist, organist, composer and comedic entertainer, Waller wrote lively hits such as “Ain’t Misbehavin’” and “Honeysuckle Rose,” both of which were inducted into the Grammy Hall of Fame. Because of his relaxed style, he excelled in performing Dixieland, jazz, ragtime, stride and swing toe-tapping melodies.
Thanks to Thom Hofrichter, managing artistic director, and his talented cast at First Presbyterian Church, “Ain’t Misbehavin,’” a musical revue highlighting Waller’s music, will be presented beginning this week.
“We’ll be featuring a seven-piece band, which includes a piano, bass guitar, drum kit, trombone, trumpet, clarinet and the saxophone,” Hofrichter said, adding that this type of production was not an easy one.
“Musicals are always a bit of a trial for me since I don’t read music, or as I like to say, ‘I read music but the same way a third-grader reads English.’ This performance is completely music; there is no book or libretto, which is the play part of the revue. Since it is all music, it is always a challenge for me.”
Did Hofrichter use a music adviser to help with the revue?
“Yes, we were very lucky to have a young man, Kenneth Xiaoling Jiang, a pianist with a degree from Julliard, so he was essential in helping us interpret the music,” Hofrichter said.
“This production is a wonderful tribute to the African-American artists of the early 20th century period. Fats Waller was legendary during the Harlem Renaissance of the 1920s and 1930s and he wrote more than 500 songs, many of which are still being sung by current artists.”

Fort Wayne News-Sentinel: 'Ain't Misbehavin' opens at First Presbyterian Theater [A musical tribute to the black musicians of the 1920s and 1930s.]