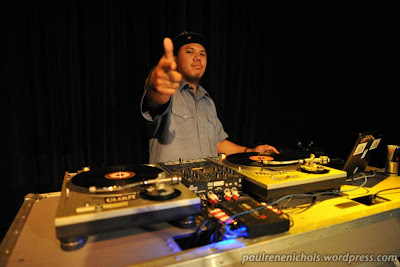 DJ Charlie is one of the hardest working DJ's in Austin. The guy is everywhere. You'll catch him DJ'ing for many of the shows around town to holding it down at several weekly events like at Plush. His love and approach to his art and his craft really shine through as you talk to him. You can even tell by his choice of venue for this interview; the restaurant, Ramen Tatsu-ya, run by one of his idols, DJ Tats.

The beginning of the story reads like a typical guy chases girl story only with a DJ twist. The steps to victory seem all so simple, yet as everyone knows, the execution would prove much more difficult. The game plan goes like this: girl likes DJ's, get into DJ'ing then get girl, score. And so, the journey starts and we find our heroine at Guitar Center buying a DJ box set with all of his hard earned cash.

DJ Charlie never did get the girl, but he did immediately fall in love with DJ'ing. A pivotal moment in his growth came at 14 years old when DJ Charlie ventured out to a rave. And where he stood hypnotized at the turntables listening to drum and bass. Over the next several years, he would amass a collection of hundreds of drum and bass records.

The high school years would be a mix of partying and childhood indiscretions. On one such occasion, while DJ'ing at a house party, the cops show up and bust the party. After his parents were called to pick him up at 4 in the morning, on the ride home, DJ Charlie springs out of the car to run away from the certain beating that would have surely come from his father. And as if by fate, the sounds of drum and bass called to him like sirens from a near by house. With a knock on the door and an introduction that was sure to have sounded shady, DJ Charlie finds his first DJ friend and mentor, B1 of Sonar DnB at Plush.

As fate would have it, another girl would become the obsession of DJ Charlie. Only this time, he would get the girl and she would be his first love. This new love would expand his knowledge of Hip Hop, introducing him to old school Hip Hop like Atmosphere, Aesop Rock, Immortal Technique, A Tribe Called Quest and Black Star. This next chapter would see the birth of Hip Hop in DJ Charlie.

As DJ Charlie starts taking the business of music more seriously, he would start to make a name for himself by teaming up with Kydd of the LNS Crew. The partnership would result in tours Pac Div, Curren$y and even Public Enemy. However, even with all the trials and tribulations during these shows, DJ Charlie will tell you that he finally grew hair on his balls when he was invited into the Table Manners Crew by DJ Digg of HOTT Bookings. And that's because of the respect and reverence DJ Charlie has for DJ Tats and the TMC establishment.

So after finding love and Hip Hop, what does the future hold for our knight in shining armor? No one knows for sure. What is certain is that DJ Charlie will try his best to infect your minds with some dope ass music.

This post first appeared on Austin Hip-Hop Scene, please read the originial post: here
People also like
My Biased Repp Sports Raze Energy Drink Review (I’ve Tried Over 10 Flavors)
What Do Rehab Centres Offer?
Carpenter Ants in House
How to Exchange ETH to BTC Without Going Crazy Over It
Music Profile: Crissi Cochrane - Soul Singer Songwriter - Ontario, Canada | SRL Networks London Music PR
“The Friend Who May Not Seem a Friend” – The Cat and the Fire, Post 2 of 3
Short Happiness Quotes From Famous and Unknown People