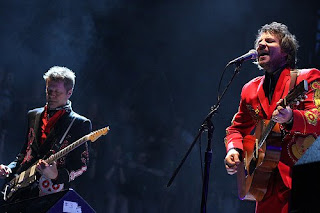 Okay, it's ancient history by now, I know that. I have no explanation for why I can't seem to get to this blog lately, but such is life. I need to get back to my idea from a few months ago and keep the posts very brief, but more frequent. Just a few words on what I saw on Day 2 and Day 3, so I can move on:

Day 2 for me of course was dominated by Wilco. Of course I've seen them numerous times, and this set was certain to be less adventurous since they were playing to a festival crowd. But I have no interest in Rage Against the Machine, and let's face it, if you're at a festival and your favorite band is playing, ya gotta be there. I pushed to the front to see the boys play a great energetic set, including a new tune called One Wing ( a WIP, or work in progress as Tweedy called it). The band came out in brightly colored and sequined Nudie suits, which looked like a cross between the Grand Ol Opry and Sgt. Pepper. A splendid time was guaranteed for all.

Earlier in the day I caught several bands including:

Dr. Dog - Their low-hi, retro sounding albums are deceiving. They are potent, great live Band too.
Foals - I really enjoyed this Energetic Set from these so-called 'math-rockers'. Intricate and alternative, like King Crimson meets the Cure. I just wandered over to the Citi stage for this. One the great things about a festival with so much diversity is to discover a band you're never heard of.

Sexy Games for Married Couples
Crunchyroll – How to Watch Anime Onli…
Podcasting
DeVotchKa - This set was a blast. Never thought I'd see a rock band with a female tuba player.
DJ Bald Eagle - I don't really get the appeal of the whole DJ thing. Maybe in a dance club, but not here.
Battles - Similar to Foals, but not nearly as good.
Broken Social Scene
By Sunday, I was starting to burn out a bit, so I got to the fest a little late. The suprise of the day was Blues Traveler, which played a terrific set, closing with a cover of I Want You to Want Me. One of the original jam bands, and still going strong, and I saw a lot of Young Kids really getting into it. Love and Rockets was good, but even better was the National, who attracted an overflow crowd at the Playstation 3 stage.
The crowd slowly gathered all afternoon in anticipation of Nine Inch Nails. I chose NIN mostly because I couldn't care less about Kanye West, who was heading the other end of the festival. I really have no connection to the type of music NIN plays, but I was curious. I only lasted about a third of the way through, bored by the brooding and aggression. The light show was pretty amazing, though. I felt sorry for some of the parents who there with their young kids in a sea of bodies as Trent Reznor growled about wanting to 'fuck you like an animal." So I wandered over to the other end and discovered one thing about Kanye; without the studio, the dude can't sing.
Even though the Sunday headliners disappointed, I will almost certainly return next year.