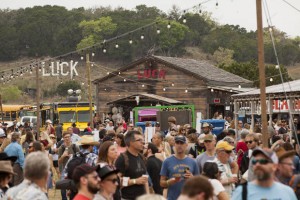 Willie Nelson knows a thing or two about throwing a good party. He’s been hosting his annual Fourth of July picnics in Texas on and off since 1973, and for the past several years he’s taken to holding another in his literal backyard: the Luck Reunion. This year’s event, taking place March 15th, includes Devon Gilfillian, Nikki Lane, Josh Ritter, and dozens more – led, of course, by Nelson and his Family Band.

Taking place each year during the second week of South by Southwest, Luck Reunion has become a sort of refuge from the sprawling music conference that overruns Austin each March. Located outside Spicewood in the Texas Hill Country, Luck Ranch is Nelson’s private home, with the live music happening in the town of Luck that was constructed as the set for his 1986 film Red Headed Stranger.

The 40-plus acts announced so far include a mix of artists from the world of country, Americana, and roots music, with several hailing from the Lone Star State and many more who have collaborated with Nelson over the years. Preservation Hall Jazz Band, Nathaniel Rateliff and the Night Sweats, Hiss Golden Messenger with Phil Cook, Kurt Vile, Joshua Hedley, Lily Hiatt, Aaron Lee Tasjan, Waxahatchee and Erika Wennerstrom of Heartless Bastards are among the many notable acts. Paul Cauthen and the Texas Gentlemen, who host a “Gents and Dames” jam session, also return from last year, as do Lukas Nelson & Promise of the Real.

Even more so than the Fourth of July picnic, Luck Reunion keeps the communal hippie spirit alive of Nelson’s Seventies-era cosmic cowboy gatherings alive. Old friend Ray Wylie Hubbard hosts one of the many featuring activities of the Reunion, the Luck Chapel Sessions, which features performances in Nelson’s recording studio and this year includes John Doe, John Paul White, Kelly Willis, and Cody Canada. There will also be an Artists in the Round taking place with Caleb Caudle, Sam Lewis, Courtney Marie Andrews, and Kevin Kinney.

Nelson is currently recuperating from a bout of the flu that forced him to cancel a string of shows last month and all of his shows for February. He’s scheduled to return to stage shortly before the Luck Reunion, with a gig in Greenville, South Carolina on March 5th. The 84-year-old is recovering well according to son Lukas, who posted a photo on Sunday of Willie practicing martial arts. “My dad is a badass,” he wrote. “Resting in Maui and feeling much better, according to him.”