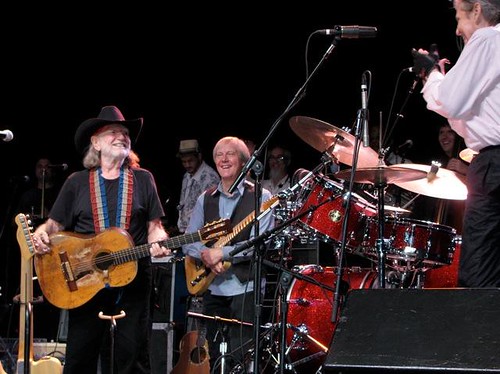 www.glidemagazine.com
by: By Shawn Donohue

Two Living American Treasures played one of America’s greatest concert venues on a humid summer night to the sold out house of all ages. Both Willie Nelson and Levon Helm have lived through over 70+ years of success and tribulations, that they are still performing such passionate shows nightly is a testament to their impact on popular music and their burning desire as artists.

The Levon Helm Band opened with a set that spanned the foundations of rock and roll. Levon was slapped a firm hand on the snare, playing with conviction as he was backed by a 13 piece band whose musical director, Larry Campbell, called the shots. There was a foray into gospel via Teresa Williams exuberant howling of “(Ain’t That) Good News” and a touch of country with the classic “Deep Elem Blues” whose conclusion turned into a horn filled soul review provoking Levon to start Hambonin’ and Juba Dancin’ using his mandolin provocatively. Helm himself sang more at this show then he has in recent NYC performances, trading verses with Campbell on a cover of Dylan’s “Blind Willie McTell”, and no matter how the voice may sound the love will always be there.

The meat and potatoes of Levon’s performance were the timeless tunes he recorded with The Band. “The Shape I’m In”, “Ophelia” and “King Harvest” showed up early, while a guitar solo by Campbell proceeded “Chest Fever” and Willie Nelson came out to strum on Trigger (but not take a verse) during the set closing version of “The Weight”. With only one clunker (the piano heavy cover of Leadbelly’s “Bourgeois Blues”) highlights dominated, but standing slightly taller then most was the NOLA flavor of “All On A Mardi Gras Day”. Clark Gayton introduced the song via a stirring trombone solo before the band exploded into reverie with a parade, sticky sweet keys, pumping tuba, big bass drums and a flair for life.

Willie Nelson came out with much less support only bringing with him a simple snare drum, piano, bass, harmonica and his trusty Trigger. Oh, and his voice. While Helm has suffered from throat cancer, Nelson has not only aged pristinely, he may have become an even better singer. That was the true highlight of Nelsons set; his tone, range and lyrics soothingly floated off the legendary walls of RCMH and I gotta believe that those notes and phrases would have sounded just as pure being sung in a dusty Corpus Christi saloon.

The crowd appreciated his string of greatest hits including; “Whiskey River”, “Night Life”, “Bloody Mary Morning”, “On The Road Again”, “Crazy” and “Angel Flying Too Close To The Ground”. It is pretty astounding when you catch Willie Nelson live and remember just how many fantastic songs the man has written. All of the classics were accentuated brilliantly by harmonica player Mickey Raphael and Willie’s unique Pecos-Jazz style guitar strumming. As a show tonight’s bill would have worked better with The Levon Helm Band closing with the party vibe, yet there was no doubt that both artists continue to provide their fans artistic performances at the highest of levels; truly living American treasures. 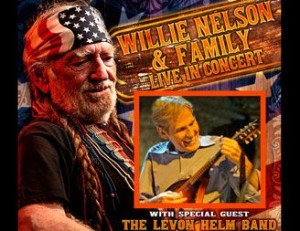 Oedro – Independence Day Sale: Up to …
A Guide To Visiting Antigua, Guatemal…


This post first appeared on Still Is Still Moving, please read the originial post: here
People also like
Oedro – Independence Day Sale: Up to 20% Discount
A Guide To Visiting Antigua, Guatemala: The Best 5 Things To Do And See