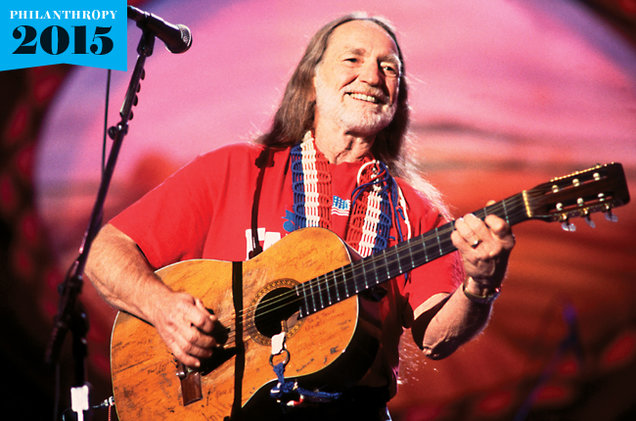 It all began with a few words from Bob Dylan onstage at the Live Aid concert in July 1985, asking: Couldn’t some of the money raised go to help American farmers?

Motivational Tips to Help You Stick …
Merry Christmas and Mahatma Gandhi
Why Friday The 13th Will Be Your Luck…
Hey You, Finish 2019 Strong
Ripple’s Comment on the Present Scen…

“The question hit me like a ton of bricks,” remembers Willie Nelson, who was on the road that day, watching the event on his tour-bus TV. He immediately began looking into the state of American agriculture. This was a time when family farmers were suffering mightily. Thousands were being forced off their land and driven into bankruptcy.

Enter Nelson, who, a few days after Dylan’s remarks, met with his friend Jim Thompson, the then governor of Illinois, at the St. Louis Fair. With Thompson’s help — and the collaboration of John Mellencamp and Neil Young — the first Farm Aid concert took place that same summer, on Sept. 22 at the University of Illinois’ Memorial Stadium in Champaign. More than $7 million was raised. Thirty years later, Farm Aid, an annual and much beloved American institution, has grown that number to $48 million.

Today, the 82-year-old Nelson remains fervently committed to the nonprofit that he helped to create.

What are your earliest memories of giving back?

Church. Ours was the United Methodist in the little town of Abbott, Texas, where I grew up. We had a collection box, and even though we were struggling financially, I knew there were folks with far greater struggles. As part of a loving community, I was taught the moral responsibility of helping those in need.

Of all the causes you might have championed, why Farm Aid?

Farming was my first job. I picked cotton. I pulled corn. I knew firsthand what it meant to farm. I knew damn well how tough it was. In high school, I was a proud member of Future Farmers of America. My farm roots are deep-seated in the soil of my personal story.

In Farm Aid’s three decades, what is your most memorable moment?

It might have been that first one, because back then there was still uncertainty. Who knew if the idea would work? So it was a real thrill when the show sold out and 80,000 fans showed up. Beyond Dylan, Young and Mellencamp, we had B.B. King, Waylon Jennings, Bonnie Raitt, Kris Kristofferson, Roy Orbison, Johnny Cash and a slew of others. Everyone was eager to pitch in.

1985, Champaign, Ill. The inaugural Farm Aid raised more than $7 million with a crowd of 80,000. From left: Cash, Nelson and Jennings. Paul Natkin

Through Farm Aid’s history, what is your proudest accomplishment?

The fact that we’ve raised the public consciousness. There’s awareness today about the challenges of farming and the benefits of buying products on a local level — especially organic Food — that was missing 30 years ago. Farmers’ markets have sprouted up. People realize the downside of shipping in food from hundreds of miles away — wasting money on costly fuel — when wholesome food can be grown and bought within a local area.

Do you believe the plight of the farmer has significantly improved?

There’s lot of work still to be done, but yes, I do believe real progress has been made. The proliferation of social media, for example, has been a good thing. All forms of communication help, especially when communication starts at the grass-roots level. Corporate-owned newspapers and magazines can be biased, but nowadays folks are looking beyond that; they’re hungry for the truth. Consumers are educating themselves about where and how food is grown.

In addition to Farm Aid, for years you have been involved in the fight to legalize marijuana and recognize the benefits of hemp products. Are you still passionate about that cause?

More passionate than ever. I was recently encouraged to read about parents traveling to Colorado and Oregon where they could legally obtain marijuana so that, under a doctor’s care, their children’s seizures could be effectively treated. When it comes to pot, the dark ages may finally be behind us. It has been 25 years since I campaigned for Gatewood Galbrath, a Lexington, Ky., lawyer running for governor with a let’s-legalize-pot policy. We lost that battle, but now it looks like we’re winning the war. The decriminalization of marijuana is a growing and unstoppable movement. The good uses of hemp — for agriculture, clothing or the relief of serious pain — are well documented and irrefutable. Old prejudices die hard, but the anti-pot bias of a misinformed establishment is not long for this world.

Do you think the world of today is a more charitable one than the world you knew as a younger man?

I’d like to think so, but I’m no social scientist. I’m just a picker from Hill County, Texas, who has led a very fortunate life. When I look back on that life, I remember acts of remarkable charity. My grandmother, the woman who raised me, was the most giving woman I’ve ever known. And of course during the different wars, you had many artists donating their services to entertain our troops abroad. But the advent of Farm Aid and many of the causes that followed brought on something new, something I hadn’t seen before.

Artists began banding together around urgent sociopolitical causes. In the past 30 years, that impulse — to address the pressing issues of our times — has strengthened. It goes beyond respecting the folks who grow our food. It even goes beyond the quality of the food itself. It’s about loving Mother Earth. Because we love her, we study her. And that study reveals her desperate state. It demands that we protect her from greedy and lethal exploitation. We need to be proactive about championing the causes that will preserve our natural resources and maintain a high quality of human and animal life. It’s a monumental task, but I have a deep belief in humanity. There are millions of good people committed to do the right thing. It’s just a matter of harnessing our energy, staying positive, remaining organized and fighting the good fight. Man, I’m ready to go!

This article originally appeared in the Oct. 24 issue of Billboard.