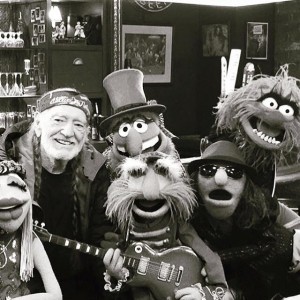 www.TheBroadwayWorld.com
Generally Inhospitable” – When Miss Piggy breaks her leg rehearsing a dance number, Kermit gathers the crew and they broadcast “Up Late” from the hospital. Back at the studio, Rizzo, Pepe and Yolanda find creative ways to keep Pache occupied so he doesn’t ruin the show while Kermit is out, on “The Muppets,” TUESDAY, MARCH 1 (8:00-8:30 p.m. EST) on the Abc Television Network.

“Because…Love“ – After her stint in the hospital, Miss Piggy and Kermit reevaluate their relationship, and Kermit turns to Jack White (The White Stripes) for advice, on “The Muppets,” TUESDAY, MARCH 1 (8:30-9:00 p.m. EST) on the ABC Television Network.

“Generally Inhospitable” was written by Margee Magee and Angeli Millan and directed by Randall Einhorn. Guest starring are Willie Nelson as himself and Utkarsh Ambudkar (“Pitch Perfect,” “The Mindy Project”) as Pache.

“Because…Love“ was written by Scott Weinger and Emily Wilson and directed by Randall Einhorn. Guest starring is Jack White (The White Stripes).