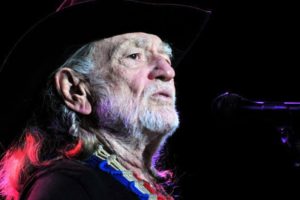 Willie Nelson: Who will he sing with next?

Gonna be a good weekend for Willie Nelson.

Today, he’s drops God’s Problem Child, his first album of original material in three years; tomorrow, he turns 84. The new record’s title track, written by Jamey Johnson and Tony Joe White, features the late Leon Russell, and that’s just the latest of many collaborations in his long career. Willie’s biggest international single was a duet with Julio Iglesias, he’s released duet albums with everyone from Asleep at the Wheel to Wynton Marsalis, and he may be the only person to ever record with all three Hank Williamses. So we started thinking about some of the noteworthy songs over the years that Willie’s sung with partners. Here are just a few.

Shirley Collie and Willie Nelson — “Willingly” (1962)
After a few years of writing songs for other singers (including Roy Orbison and Patsy Cline), Nelson finally hit the country charts with “Willingly,” a cloying ode to slipping around. Casting about for a partner who meshed with Willie’s peculiar tone, producer Joe Allison finally settled on Collie, who was a match in more ways than one: Nelson divorced his first wife and married Collie in 1963.

Tracy Nelson with Willie Nelson — “After the Fire Is Gone” (1974)
Blues/R&B singer Tracy Nelson (no relation) founded the band Mother Earth (which, for a moment, counted Boz Scaggs as a member) in San Francisco, then relocated to Nashville, where she eventually went solo. She decided to cut the Loretta Lynn/Conway Twitty hit “After the Fire Is Gone,” and upon learning that Willie was back from Austin, she got him to participate. (After a chance meeting with Tracy the night of the session, Linda Ronstadt appeared on backing vocals.) The high-stepping country-rock number earned both Nelsons a 1975 Grammy nomination.

Waylon Jennings with Willie Nelson — “Luckenbach, Texas (Back to the Basics of Life)” (1977)
Since the chorus mentions Willie’s “Blue Eyes Crying in the Rain,” having him sing along was just plain sense, even if he’s mostly here to lighten Waylon’s doleful load. With its yawning guitar and references to twang titans, “Luckenbach” remains a staple in the Texas Hill Country to this day. But according to legend, Waylon ended up hating the tune — he’d never been to Luckenbach, and he reckoned that co-writer and producer Chips Moman hadn’t either. Jennings did eventually get around to playing there, just once, in 1997.

Waylon Jennings and Willie Nelson — “Mammas, Don’t Let Your Babies Grow Up to Be Cowboys” (1978)
Written a few years prior by Ed and Patsy Bruce, the skittering, waltz-time “Mammas” puts a comic spin to the outlaw-country mythos. (“Let ‘em be doctors and lawyers and such,” they sing dismissively on the refrain. Please let me know if this song made you become a lawyer.) With such a killer chorus (practically hollered by a backgrounded Willie), Jennings and Nelson are free to underplay the lyric everywhere else, leaving us to ponder what’s so bad about a profession that likes pool rooms and little warm puppies.

George Jones with Willie Nelson — “I Gotta Get Drunk” (1979)
In the 1970s, the Possum was a peerless purveyor of gothic psychodramas, while Willie rendered the delicate emotional life of the mind. But their duet is a devil-may-care honky-tonk. “I Gotta Get Drunk” was a 1970 Nelson composition, but you’d think he wrote the thing just for George, who tears into the text with a revivalist’s fervor. The infamously embattled Jones — “the second-best white singer in America,” Sinatra supposedly called him — namechecks Willie and himself while hollering about bad choices and cheap drinks.

Willie Nelson and Ray Price — “Faded Love” (1980)
Nelson cut a series of duet albums in the late ‘70s and early ‘80s with old heroes like Faron Young, Webb Pierce and Roger Miller. The most poignant effort, though, may be 1980’s San Antonio Rose, a collaboration with Ray Price. Once upon a time, Nelson served as Price’s bassist (replacing Johnny Paycheck!) and with the Bob Wills chestnut “Faded Love,” he returned his mentor to the Top 5 for the first time in five years. (San Antonio Rose was also the title of Price’s 1961 Bob Wills tribute LP, on which Nelson played guitar.) This version is positively courtly, with Willie plaintively holding his notes and Price acting his usual gentlemanly self. Gorgeous fiddle solos bookend the track.

Julio Iglesias with Willie Nelson — “To All the Girls I’ve Loved Before” (1984)
After conquering the European market, Spanish pop singer Julio Iglesias signed to CBS and moved to America. On his stateside breakthrough, 1100 Bel Air Place, Iglesias converted Albert Hammond’s Hollies-style pop-rock ballad “To All the Girls I’ve Loved Before” into a gauzy, piano-studded showstopper. Willie’s vocal is an odd fit for this humblebrag about bedpost notches, his existential self-actualization starkly contrasting with Iglesias’s tremulous pining, but the thing sure resonated: the song hit the Top 10 across the world.

Willie Nelson and Ray Charles — “Seven Spanish Angels” (1984)
This long-overdue musical meeting with Charles, who created a language of jazz, soul and country with which Nelson was only fitfully conversant is a countrypolitan weeper with distant mariachi horns and big backing vocals. Each singer wrings maximum pathos from the lyrics before Billy Sherrill’s string crescendo ups the ante.

Willie Nelson and Hank Williams — “I Told a Lie to My Heart” (1985)
Six years before Natalie Cole’s “Unforgettable,” Willie tapped a legend for a chronologically impossible duet. In a Billboard article (with the subhead “Singer’s Latest Duet Album Is Unusual Even For Him”), Kip Kirby traced the circuitous route. The original, which was never released, was believed to be a songwriting demo that predated any recording deals. The Country Music Foundation acquired the recording in 1983, and the institution’s founder fortified the track with rhythm guitar before turning it over to Nelson. By today’s standards, the diminished quality and audible pops connote nostalgia. At the time, though, this was a cutting-edge production: a painstaking merger of Willie’s keening, subordinate vocal and spare soloing with a 78 rpm acetate.

Hank Williams, Jr. with Reba McEntire, Tom Petty, Reverend Ike and Willie Nelson — “Mind Your Own Business” (1986)
Bocephus paid particularly vigorous tribute to his dad on this cover of Senior’s 1949 hit. A souped-up rocker in the vein of his other rowdy mid-decade hits, “Mind Your Own Business” is distinguished by its Western swing touches — the fiddle stings and woodwind (!) solo — and the eclectic guest lineup. Reba’s in high dudgeon, and Petty takes his drawl for a long walk; by comparison, Willie’s jazzy delivery suffers. The odd man out is Frederick “Reverend Ike” Eikerenkoetter, a prosperity-gospel preacher who didn’t like his verse about getting into heaven, so he swapped with Nelson. Hank mailed each participant a gold record.

Willie Nelson with Bob Dylan — “Heartland” (1993)
Like Kanye-Rihanna-McCartney’s “FourFiveSeconds” or Wyclef Jean’s “Kenny Rogers – Pharoahe Monch Dub Plate,” “Heartland” is an exquisitely rare intersection of pop-music touchstones. Dylan and Nelson had previously collaborated, in a sense, on USA for Africa’s “We Are the World,” And Nelson’s annual Farm Aid benefit drew inspiration from Dylan’s comments about American farmers at Live Aid. The two played together at the first Farm Aid in Illinois, and “Heartland” elaborates on those charitable themes. The pain is seen more than felt, but vets like Benmont Tench and Jim Keltner help put the songs reverent delivery across.

Toby Keith with Willie Nelson — “Beer For My Horses” (2002)
A prime example of Keith’s post-9/11 swerve into mirror-flexing belligerence, “Beer For My Horses” yearns for good old-fashioned vigilantism. (Willie sings about “the long arm of the law,” but Toby’s getting his crime reports from the TV.) Willie’s here as an outlaw metonym: there are no effete nylon-stringed solos here, just a twangy figure that rings like a cop’s siren. Nelson rode what was essentially a Walker, Texas Ranger tribute to his first country #1 since 1986.

Willie Nelson with Kid Rock — “Last Stand in Open Country” (2002)
Though Willie had been doing duets his entire career, following Supernatural, his albums started receiving comparisons (sometimes unfavorably) with Carlos Santana’s. Arriving after Rainbow Connection, a slight (yet still Grammy-nominated) family affair recorded at Nelson’s Texas ranch, 2002’s The Great Divide bore that weight considerably. (It didn’t help that Rob Thomas wrote the leadoff cut.) “Last Stand in Open Country” was one of two Bernie Taupin co-writes, which you can tell as soon as Willie sings “I was looking for America/ In a Western movie.” In the middle of a transition from rap-rocker to cornpone kook, Kid Rock chews this banjo-pinned roots ballad until it’s mush. It’s pretty impressive, actually.

Willie Nelson with Lee Ann Womack — “Mendocino County Line” (2002)
Since her 1997 debut, Womack has been one of country music’s premier stylists, whether tackling throwback country-soul or apiary tone poems. Her ache for things past pairs congruently with Willie’s plainspoken recollection; he wisely cedes her the emotional high ground of the bridge. This was The Great Divide’s second Bernie Taupin credit, and it’s amazing how deftly both singers avoid the lyrics’ bear-traps. Womack sings “our orchestrated paradise” like it’s no big thing, and they both make the line “these pictures and these photographs” feel like a poetic device, rather than meter-filler. The result was Willie’s first Top 40 country hit in 20-odd years, as well as a Grammy for Best Country Collaboration.

Willie Nelson with Toots Hibbert — “I’m a Worried Man” (2005)
A Willie Nelson reggae album sounds like a slight inevitability, but Countryman was years in the making. Originally workshopped with Don Was for Island Records back in the mid-’90s, the project stalled when label founder Chris Blackwell left. When Johnny Cash learned about the project, he suggested a song he wrote when living on Montego Bay. With an energetic and typically ageless vocal performance from Hibbert, the result is decidedly un-worried: a genial blend of sticky pop-roots and steel guitar.

Snoop Dogg with Willie Nelson — “Superman” (2011)
Their first collaboration was 2008’s “My Medicine,” partially recorded in Amsterdam the day after 4/20, and way bouncier than you’d expect for a track featuring Everlast in this century. “Superman” is even more fun. This acoustic country-swing number opens with Nelson talking about his carpal tunnel syndrome before he and Snoop and Willie sing about overexerting themselves while self-medicating. “I blew my throat and I blew my tour,” recalls Snoop, “I wound up sippin’ on soup du jour.”

Kacey Musgraves with Willie Nelson — “Are You Sure?” (2015)
In a throwback move for such a forward-looking artist, Musgraves included Nelson’s “Are You Sure?” as a hidden track on Pageant Material, though she also released a video for the song. Dreamy and rueful at intervals, “Are You Sure?” features a supremely weary Willie in his lower register, with a classic guitar solo and deft comping on Musgraves’ bridge.

Willie Nelson and Merle Haggard — “Django and Jimmie” (2015)
Django and Jimmie was the last of four collaborations between Willie and Hag; it was Merle’s first album since 2011 and his last before dying on his 79th birthday in 2016. Like “Pancho and Lefty,” the Townes Van Zandt song they’d topped the charts with 32 years earlier, whose jsprightly intro belied the gray comedy within, “Django and Jimmie” spins a yarn of two heroes. Only here, they’re real: Django Reinhardt’s jazz guitar innovations were a fundamental influence on Willie Nelson, and Jimmie Rodgers was country’s post-Hank crossover figurehead. This Jimmy Melton/Jeff Prince composition lets its singers get musicological without becoming maudlin. “A young singing brakeman/ A jazz playing gypsy,” they sing in waltz time, “Might not have been/ A Merle or a Willie/ If not for a Django and Jimmie”. The emotional capstone: Merle closes with a modest attempt at a Rodgers yodel.