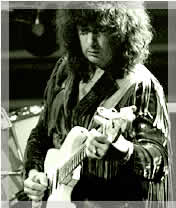 Born in Weston-Super-Mare (a seaside town on the west coast of Britain), April 14th 1945. Blackmore moved to Heston, in Middlesex when he was two. At school he joined The 2I's Coffee Bar Junior Skiffle Group on wash-board. He then bought a Framus acoustic and took classical lessons for a year.

At 15 Blackmore left school to work at Heathrow and with school-friend Mick Underwood, formed The Dominators. They then joined The Satellites before Blackmore moved on to Mike Dee and The Jaywalkers, becoming accomplished technically as a result of rigorous practising. He bought a cherry red Gibson ES335 and took lessons from Big Jim Sullivan, guitarist with The Wilde Cats.

In early 1962 Blackmore joined Screaming Lord Sutch's Savages and at the end of the year he and Underwood joined The Outlaws, working for producer Joe Meek on their own records and as session musicians for three years for artists like Heinz, Tom Jones, Burr Bailey, John Leyton, Glenda Collins, Deke Arlon, Mike Berry, Davy Kaye, Freddie Starr, Gunilla Thorne and many more. The Outlaws also played live for Jerry Lee Lewis and Gene Vincent. Blackmore joined Heinz & The Wild Boys in May 1964, cut a solo single in 1965, produced by Derek Lawrence, before returning to Lord Sutch. He then toured Germany and moved to Hamburg.

In late 1965 he formed The Three Musketeers who did just one concert, and then joined Neil Christian's Crusaders for six months before playing in Italy with The Trip, then joining Sutch's latest band The Roman Empire in 1966. Blackmore got a band together at the end of 1967 in Hamburg, called Mandrake Root. It was at this time he was contacted by manager Tony Edwards and returned to the UK to be in at the start of Deep Purple.

Blackmore stayed with Deep Purple from 1968 - 1975 (Mk 1, 2, 3) before starting his own band, Ritchie Blackmore's Rainbow. In 1984 Deep Purple reformed with Blackmore (Mk 2, 5) but he quit in 1993. He briefly reformed Rainbow for one album before moving on to acoustic based music with his girlfriend, in Blackmore's Night. Their first album was issued in 1997.

Some people seem as if they were born to be great players. The minute an instrument is thrust into their fledgling hands,they take to it like a second skin, shedding the darkness of ignorance in favor of the light of musical prowess.No so for Ritchie Blackmore. Although he had strong motivation to improve ("When I was eleven I had an acoustic guitar,and my father threatened me with it. He said, ‘If you don’t learn this instrument, I’ll smash it over your head!’"), his firstfew years were a struggle. Classical lessons didn’t help much either. But at 13, he was drawn to the fretting prowess of English artists like Hank Marvin of the Shadows, and Gene Vincent’s guitarist Cliff Gallup. American rockers Duane Eddy, Buddy Holly, and others also caught his ear. Hours spent learning
their guitar parts paid off, and he began to get the hang of it.

The real turning point, though, was his discovery of country pickers: Chet Atkins, Speedy West, Jimmy Bryant and their compatriots impressed young Blackmore with their speed and adept flatpicking techniques. He worked hard to develop the same qualities in his playing, and thus acquired much of the quick picking and double note riffing that characterizes his style to this day.
Although it still wasn’t easy, he worked hard, coming home from school as soon as possible and putting in up to eight hours of practice every day. He even slept with his guitar. "I didn’t know whether it was safer to keep the guitar in the bed or underneath it," Blackmore recalls. "Either way I was afraid I’d break the thing." By the time he reached 16, the devotion to and subsequent mastery of fast, complex riffing led to session work – often sharing studio dates with Jimmy Page – and stints with the theatrical rock group Screaming Lord Sutch. He eventually tired of session work and moved to Hamburg, playing with several bands, and meeting organist Jon Lord and drummer
Ian Paice, with who he would form Deep Purple.

At first the band (which included bassist Nicky Simper) was fronted by lead singer Rod Evans. Their first album, Shades of Deep Purple, gave them a Top Five hit in the US in 1968: "Hush," a Joe South cover; they scored another US hit in 1969 with Neil Diamond’s "Kentucky Woman" from The Book of Taliesyn, released only in the States. Following their third album, Deep Purple, their American label folded and the group made the first of their many personnel changes. After seeing a young Robert Plant singing in a club, Blackmore decided, "We’ve got to have a singer who can compete with this guy," and Evans was replaced by Ian Gillan, while Simper was replaced by bassist Roger Glover. Following 1970’s Concerto for Group and Orchestra, the new lineup began moving away from the more classical organ sound of their early albums and towards a more guitar-driven, aggressive-vocals "metal’ sound, which was evident on their 1970 release, Deep Purple in Rock and 1971’s Fireball, both successful albums. It was 1972’s Machine Head that
earned them their place in rock history, with the enduring hit "Smoke on the Water," as well as "Space Truckin’" and "Highway Star." Who Do We Think We Are in 1973 gave them the hit "Woman From Tokyo," but Gillan and Glover left the band, to be replaced by David Coverdale and Glenn Hughes for 1974’s Burn and Stormbringer.

In 1974, Blackmore left Deep Purple and formed Ritchie Blackmore’s Rainbow with a New York band called Elf and its lead singer, Ronnie James Dio. Deep Purple endured for another year or so before officially disbanding. For nearly ten years Rainbow was a fairly successful band, especially in the UK, and endured many personnel changes, but in 1983 Blackmore dissolved it to reform Deep Purple with Gillan, Glover, Paice and Lord, and they recorded their comeback album, Perfect Strangers, which went platinum. Blackmore continued with Deep Purple through several more albums, during which Gillan left and returned (replaced by Rainbow’s Joe Lyn Turner in the interim), but Ritchie left the group during the supporting tour for 1992’s The Battle Rages On…, citing displeasure with Gillan’s performance. Following his second departure from Deep Purple, Blackmore reformed Rainbow in 1994, recording and touring with them throughout 1995, 1996 and 1997. In ’96 he began moving in a new direction, without Rainbow. Teaming up with vocalist and lyricist Candice Night, they released the acoustic Renaissance album Shadow of the Moon as Blackmore’s Night, and followed it up in 1999 with Under a Violet Moon and 2001’s Fires at Midnight. Taking a decidedly different turn from the usual rock tour, Blackmore’s Night has instead undertaken "castle tours" of Europe, in which they play special evenings in medieval and Renaissance castles, as well as fairs and smaller venues.