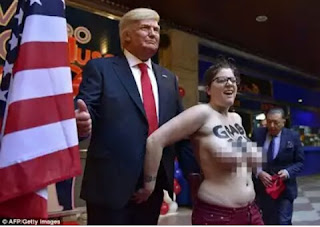 This is rather weird and disturbing, a topless activist from a feminist group called FEMEN PRESSURE GROUP grabbed a life-size waxwork of US President-elect Donald Trump by the balls yesterday, hijacking an unveiling ceremony in Madrid.


The woman, from the FEMEN pressure group, pushed past security ropes and placed her hand on the statue’s crotch while screaming: ‘Grab patriarchy by the balls.’

Museum staff struggled with the semi-nude woman for several minutes before eventually bundling her out through a back door.

Someone had better hold on to this woman, she sure needs medical attention.