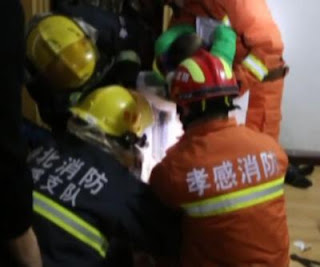 This unfortunate situation took place in china few weeks ago when a todler got stuck in a washing machine, luckily he was helped on time.


Members of a Chinese fire department were filmed dismantling a washing machine to rescue a 3-year-old boy who became trapped inside the appliance.

A video filmed last month in Xiaogan, Hubei Province shows the firefighters dismantling the washer to rescue the toddler, who apparently became trapped while playing inside the machine.


The firefighters said it took about 20 minutes to cut through the washing machine enough to free the boy.

The toddler was not seriously injured, firefighters said. Parents of this kid should monitor him very closely, same applies to all parents.