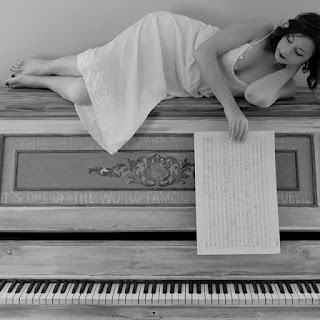 Christina Custode, multi-talented musician and award winning vocalist released her first original recording, "The Missletoe Song" in 2010 followed by a full length album titled "I" on iTunes and Spotify shortly after. The project, which consists of eight songs (all music and lyrics written and arranged by Christina Custode) put Custode on the adult contemporary music map and was heralded as an excellent start to a long and promising career.

A graduate from the prestigious Eastman School of Music in Rochester, New York, Custode’s music is current, honest and soaked with the musical integrity, which the esteemed artist strives upholds in all of her musical endeavors. She has shared the stage with artists and bands like Marvin Hamlisch and the Buffalo Philharmonic Orchestra (2005), Chuck Mangione, Lew Soloff, and Pat LaBarbera (Jerry Neiwood Tribute Concert, 2009) and currently performs with numerous jazz groups on piano and vibraphone, as well as as a cocktail piano soloist, and as a sideman with numerous blues and commercial bands.

Christina is an avid supporter of collaboration in the arts, and in 2010 participated in the production of “The Mistletoe Song” as a gift to the US Military. The project gained immediate local notoriety as her heartfelt vocal performance captured the emotion of the Holiday Season.  Her beautiful tone quality and sensitive phrasing helped garner local and national airplay on popular radio stations, as well as international exposure on thousands of internet radio stations.

Custode has released a second album of original music with legendary producer Stuart Epps.  Listeners can expect the same heartfelt, honest lyrics and high quality musical performance that Christina Custode has delivered in the past, and intends on upholding throughout her career.


This post first appeared on ..., please read the originial post: here
People also like
Don’t make this Rings of Power marketing mistake
Top Things to Do in San Francisco, California
Automatically Post To Social Media From Airtable
Ranking the 5 best penalty takers in the Premier League at the moment 2022
Xiaomi Opens its First Authorized Store in Nigeria