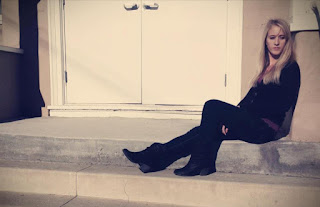 Megan composes original music for media such as film, advertising, video games, web videos, and television. There wasn't a defining moment per say when she thought she wanted to write music, it was just there from the beginning. In 2006 she heard Film Composer Hans Zimmer speak at a composer's convention in Los Angeles. He basically said "if you can do anything else, do it. The film composing industry is terribly difficult to break into, so if you have any penchant towards other fields, go for them instead." He said only the people who absolutely cannot do anything else in life and be happy should compose music for film. Megan knew she was one of those people.

Megan decided to continue on her pursuit of this challenging and rewarding career.

Growing up in the San Francisco Bay Area of California, she always had something musical going on, from taking private lessons to years participating in world-traveling choirs. Once she hit college, she wanted even more immersion and industry knowledge to further hone her abilities. She graduated from the University of California Santa Cruz with a Bachelor of Arts in Film Scoring and a minor in Electronic Music. This gave her a solid foundation in music theory, ear training, film scoring techniques, film history, electronic music software, and studio recording hardware. With a desire to further her education she went on to the Berklee College of Music, earning a Master's Certificate in Orchestration for Film and TV. The courses at Berklee encompassed an in-depth study of industry-standard film scoring practices, sound design and music for video games, and orchestration techniques.

Throughout her life and the years of musical training she had the incessant desire to compose. After graduation from the University of California she started writing music for films, advertisements, web promos, licensing libraries, and iOS games as much as possible, and she continues to do so today. Her style is very melodic and theme-driven, with influences from composers and artists such as Trevor Jones, John Williams, Koji Kondo, Tangerine Dream, and Depeche Mode.

Megan has won a few awards including the Hollywood International Moving Pictures Film Festival Award for Best Musical Score for her work on Lightning Bugs in a Jar. She also collaborated with the amazing Hollywood Orchestrator and Composer, Penka Kouneva on an award-winning video game. She also writes exclusive epic and terrifying trailer pieces for boutique companies Colossal Trailer Music and Elias Arts.

In a bid to make her musical pieces that much more special and unique, and set herself apart from other composers, Megan seeks out and records odd, creepy, and strange sounds of everyday life and infuses her pieces with them. She brings her creativity and extensive musical training to every project and is driven to produce music of the highest caliber. Simply put, if you looked for someone more passionate about their work, you wouldn't find them.