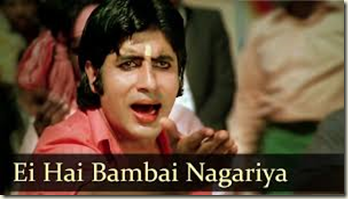 In the first part of our Bharat Darshan in songs, we journeyed through small towns for which I have a special liking. But, ‘progress’ means progression from villages to small towns to big cities. If you live in small towns, you are a lesser mortal. There are practical aspects of jobs, infrastructure, access to education, medical facilities and entertainment, which pull people from the hinterland to the big cities. Therefore, Bharat Darshan is not complete unless we cover the Metros too.

Our film industry is primarily located in Mumbai, Kolkata and Chennai. In the vintage era, Lahore and Kolhapur/Pune, too, were major centres. However, Mumbai, i.e. the erstwhile Bombay, gradually became the magnet for talents from all parts of the country. This reflected in songs too. While the songs of small towns do not show a marked predominance of any particular town, Bombay/Mumbai is clearly the epicentre for songs of metros and big cities. Delhi, though being the seat of political power of the country, fares poorly compared to Mumbai. I will try to compensate it by posting more Dilli songs than Bombay ones. The other metro songs are negligible. It would be quite a challenge for SoY‘s knowledgeable members to unearth sufficient number of songs based on other metros. Our storehouse of songs, KS Bhatia has helped me in locating songs of Kalkatta. Now Bangalore (Bengaluru), too, is counted as a metro city. I am not aware of any Hindi film song featuring this city. I am sure there should be such songs from down South, which our knowledgeable readers would be able to post. My criteria is that the song need not be picturised in that city, but it should mention the city in a prominent way.

So, let us go on our second leg of Bharat Darshan – of metro cities.

Once upon a time they called it Bombay or Bambai, which sounded so nice in songs: Ye hai Bombay meri jaan – change it to Mumbai, it is not the same. Being the home of Bollywood, Bombay also has the maximum number of eponymous songs, and warrants a post by itself. A reader Manoj has expressed a wish on ‘Open House’ that someone post a list of songs that contain nostalgic scenes of Bombay and surroundings of 1940s, 50s and 60s. I have consciously included only 3 songs for Bombay to give greater representation to Dilli and other metros. The Maximum City drew everyone like a pied piper, where dreams were made or shattered; and, therefore, people looked at it in awe or wonder, admiration or cynicism, love or hate. At one end is this iconic song – Ye hai Bambai meri jaan – which takes a sarcasm-laden look at the city.

At the other end is the wonderstruck look of a country boy who has landed in the city to eke out a living – Ei hai Bambai nagariya tu dekh babua. This song, too, describes the contradictions of the city, but does it in a non-judgmental way. The purabia simpleton, Amitabh Bachchan, with two lost kids to look after, is not deterred by the burden. He amuses the kids with his carefree abandon in this street-performance song.

Now there are many kids giving company to a trampish Anil Kapoor, who has no grudges against Bombay. He starts off with a riotous dance in a restaurant in which they have apparently gatecrashed. They go on to dancing and singing near all the iconic landmarks of Bombay: Marine Drive, Gateway of India and Taj Hotel. In the end, it becomes a medley of his famous songs like Ek do teen (Tezaab) and My name is Lakhan (Ram Lakhan).

Dilli is the capital of power, whereas Bambai has the power of capital. Politics and money are a potent combination. Therefore, while the man is gratified that he has got the bride from Dilli, the girl is equally excited that her groom has come from Bambai.  Mumtaz Ali’s dance is a delight to watch. 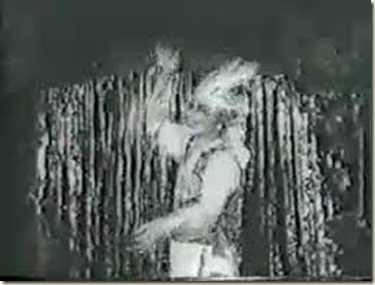 Given this importance of the girl from Delhi, giving up a Dilli girl for the sake of another is the ultimate proof of love. There is no tentativeness in the boy’s decision, he emphasis he has rushed breaking all the signals only for her.

Delhi people have a serious image problem as being boorish and uncultured. If even decent persons like Mukesh and Mahendra Kapoor take to yodelling and declaring that they are Dadas of Dilli, there is indeed a problem, though they try to suggest that they are bad for evil people, and nice people need not fear them.

Even in the 1950s, there was some defensiveness about Dilli – they are not so bad after all. The song treats Dilli at par with with Bambai.

I guess the image problem of Dilli is a recent phenomenon. Even during the turbulent times when Dilli was plundered by all, the 19th century poet Zauq said: In dino garche Dakkan mein hai bahut qadr-e-sukhan/ Kaun jaaye Zauq par Dilli ki galiyan chhod kar (These days there is a lot of respect for poetry in the south, but who can go leaving the charms of the streets of Dilli behind). Roshan captures the nostalgia and romance of Old Delhi in this beautiful song, sung so evocatively by the one and only Rafi.

Dilli has symbolized the seat of power since several millennia. Netaji gave the slogan “Dilli Chalo”. The city has seen upheavals in history, of empires being built and demolished. The young brigade of the 1857-uprising saw capturing Dilli fort as the ultimate symbol of establishing the indigenous rule ousting the firangis. The lyrics of the song are very significant in the context of today’s India. The uprising signified a unique Hindu-Muslim unity fighting against the British who were considered foreign. The rebels invoke both Bhagwan and Allah and sing of restoring the glory of Babar and Akbar who were considered our own. It is said that this was the trigger for the empire’s project of ‘divide and rule’,  when the British finally crushed the uprising with some horrific brutality, and the country came directly under the rule of the British crown.

‘Ab Dilli door nahi’ has become another metaphor akin to ‘Dilli chalo’. This would now mean capturing power at the centre in the general elections. There has also been a movie by that name. ‘Bambai chalo’ or ‘Ab Bambai door nahi’ does not evoke the same sentiment. Here HB create a chirpy song in their characteristic style.

But oblivious of all the historical and political legacy of Dilli, the bahus in this typical family drama from Gemini are only interested in the markets of the city. The city does abound in markets such as Sarojini Nagar, Karol Bagh and Lajpat Nagar which are middle-class ladies’ delight.

While the famous markets of Dilli I have mentioned in the earlier song are in some localities, mithai is ubiquitous in the city. Besides mentioning the names of various mithais, the song also stereotypes immigrants from various regions who have brought their own idiosyncrasies to the city.

Om Prakash gives a classic sight-seeing tour of Kalkatta to his fare, giving also a running commentary as he drives his tonga through its famous landmarks. The song has the typical tonga beats of OP Nayyar.

We have seen several songs in which Dilli is juxtaposed with Bombay. Here Kalkatta comes in for comparison with Bombay. A terrific street dance song performed by minor actors. Shankar-Jaikishan have come up with outstanding orchestration.

In the heydays of Johnny Walker, a comic song picturized on him enhanced the commercial viability of a film.

There is an element of exaggeration in the song, but they take care that a push from jhulaniya makes the balam fly off only to Kalkatta, the nearest metro from Hong Kong.

Can mere looks send a person flying off to another city? Despite lack of evidence, there has been a belief in psychokinesis, just as people have believed in several scientific hoaxes. This explains why at the turn of the millennium, Anand-Milind should repackage the same theme in a slightly different tune.

This is the only song with Madras that to comes to my mind. Nice combination of classical and comic. Shows how talented OP Nayyar was. It seems this song has not figured in the long series on OP Nayyar. A worthy song to end the post with.