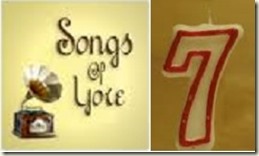 When I wrote on the sixth anniversary, I had been concerned by Gaddeswarupji’s ominous statistics that many promising blogs start losing steam in the sixth year. Seven years is ripe age for a blog. This is the stage when, I guess, a blogger starts thinking whether he/she is able to keep the readers still interested, or is doing more of the same. I believe SoY has been able to do more of different things. We are getting new readers, we also get to know of many who follow the blog regularly, though they may not be participating. A highlight has been the arrival of two new guest authors: Ravindra Kelkar and Ashwin Bhandarkar. Mr Kelkar had already made a mark as an OP Nayyar-expert. He filled up an important gap in SoY as I could not have given him the profile commensurate with his fan following. Ashwin is a Master with a light touch. Readers can expect many more offerings from them.

Subodh Agrawal had been away for a while, but he made up by three quick articles in his series on film songs based on classical ragas, covering Bihag, Maand/Shivranjini and Asavari/Jaunpuri. Our old veterans N Venkataraman and Ashok Vaishnav made timely contributions on MS Subbulakshmi and Dilip Dholakia respectively. Shalan Lal’s two pieces were remarkable for their wide sweep. Outstripping them all by miles was DP Rangan, who is continually on canter. With such a galaxy of contributors, SoY is not in the danger of becoming stale. I had to wait for seven consecutive guest articles in the current calendar year until I could get my piece in. My huge thanks to the guest authors.

We all know by now that what is there in the comment section is almost invariably no less interesting and informative than the main article. There could be no better example of the scholarship that the readers bring than the recent discussion on Asavari/Jaunpuri where the comments ranged from Mahabharata to Ragamala paintings to the anthropology of snake-charming tribes. I don’t tire of saying that it is the readers who have made SoY what it is. I have to express my gratitude to them.

It is time to enjoy some unusual songs I came across recently. On the last two anniversaries, I posted songs with identical tunes by SN Tripathi, one of which became very famous, the other getting lost in oblivion. Here is another set by his protégé Chitragupt.

This was absolutely new to me. Chandrashekhar had some fantastic songs picturised on him, some of them by Chitragupt. Here is its clone a few years later which was very well known to me and, I am sure, it would be equally familiar to readers from non-Bhojpuri areas, as Chitragupta’s Music in Bhojpuri films had a pan-India appeal. Kumkum is always wonderful as a dancer; she carved out a special niche for herself in Bhojpuri films.

I have to thank Rakesh Srivastava for this set of songs. In earlier years, too, he had sent me similar unusual songs.

When a music director recycles his own tunes, I have a dignified word for it – auto-inspiration. But there are some brazen imitations of other music directors which are so good that I hate to use the P-word. Here is a song I heard just two days back which left me zapped. The surprise was that it came in Sangeet Sarita programme of Vividh Bharati in which Ashwini Bhide Deshpande was demonstrating Bageshree-Kauns. Did she mean Nain so nain naahi milaao, and the anchor put up the wrong song? I don’t mind the error, I take it as an anniversary gift to SoY.

This is a unique mujra song. The dancer is entertaining her clients with song and dance. Nothing unusual in that. But the interlude cuts to Sulochana singing a lori to a child, naturally in slow tune. It is back to mujra with a slow recital followed by the fast refrain. A wild guess: the mujra dancer is the mother of the child, entertaining the guests for the paapi pet. Who is Sulochana then? My interest is not in all this, but in the unique composition in which a lori is nestled in the interludes of a mujra song.

I heard this beautiful duet for the first time. I am not surprised when I encounter unheard gems from the Vintage Era (1930-40s), but I was amazed how this song from the 60s remained hidden from me. 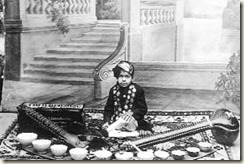 I have been paying tribute to some very unique music personalities in my anniversary posts. न भूतो न भविष्यति was never more apt than in the case of Master Madan. There have been child prodigies before in music, the most famous being obviously Kumar Gandharv (the name itself signifying a child celestial singer, his real name being Shivputra Siddaramaiya Komkalimath), but he lived up to the age of 67, singing till his last days to great acclaim. DV Paluskar died at the age of 34. Master Madan is among the most famous child prodigies in music whose death at the age of 14 has created an abiding ‘what if he had lived longer’ aura around him. Born to Sardar Amar Singh, who was a government employee in the education department, and Puran Devi in the village Khankhana (named after Abdur Rahim Khankhana, one of the nine jewels of Akbar) in Jalandhar district, he was trained in music by his elder brother Master Mohan and sister Shanti Devi, who were 13/14 years older to him. He also received training from Pt Amarnath, the elder brother of the famous duo Husnlal-Bhagatram, and who had also given music for the film Mirza Sahiban (1947).

His talent was noticed very early. His first public performance was at the age of three at Dharampur sanatorium in Himachal Pradesh where his rendering of Hey Sharda naman karun created a sensation. He received a wide media coverage. The news of the arrival of a child music genius spread like wild fire. He soon became a singer in high demand for public performances and mehfils in the courts of princely states all over the country.

The family lived in Simla and Delhi. Master Madan studied at Sanatan Dharm School, Simla and later Ramjas School and Hindu College in Delhi (?). But he was lost in music. He became a popular singer on the radio. His family extracted utmost commercial juice from his concerts which put great strain on him. Finally, his health deteriorated severely and no medicine had any effect on him.

There are several conspiracy theories around his death. One story has it that while he was singing at Ambala, a dancing girl invited him to her kotha and gave him spiked paan out of jealousy. With a slight variation, other versions say that in Delhi or Calcutta radio station some singers jealous of him gave slow poison or mercury in his drink.

HMV brought out only his two ghazals – Sagar Nizami’s Hairat se tak raha hai jahan-e-wafa mujhe and Yun na rah rah kar humein tarsaaiye on commercial records. But their phenomenal popularity was enough to put him in the Hall of Fame of immortals. Some more of his songs of different genres were got recorded as private records by music lovers. There are now in all his eight songs in public domain. Let us celebrate SoY’s seventh anniversary with the gems of the child prodigy Master Madan. Pt Amarnath is said to have composed all the eight songs.

Acknowledgement and Notes
1.    The information on Master Madan is based on two excellent articles available on the internet: one by Satish Chopra (apnaorg.com) and the other by Pran Neville in The Tribune.
2.    Most writings on Master Madan (such as Pran Neville’s article) mention that he also studied at Hindu College in Delhi. I am somewhat sceptical about this. Was he also a child prodigy in studies? The eminent TV/AIR personality Sharad Dutt, who has made short films on many music personalities including Master Madan, confirms my doubt that he was too young to study in college, though he might have given performance there.
3.    The thumbnail picture of Master Madan is taken from Pran Neville’s article.