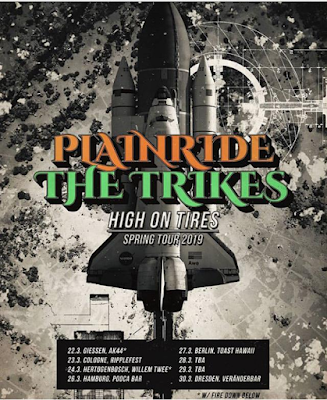 German Heavy rockers, and Ripple Music labelmates, Plainride and The Trikes, join forces to hit the European Road this March for the High on Tires Spring Tour!  The tour comes directly on the heels of Ripple Music release of Plainride's annihilating second LP, Life on Ares.

Top Extracts Kratom Review
Data’s of top-performing cryptocurren…
How To Stay Focused And Motivated In …
Kicking off in the Plainride's hometown on March 22th , the High on Tires tour then rampages through Germany. Plainrides's Ripple Music cohorts Fire Down Below will provide additional hellfire to the tour for the first three dates.
The Trikes meanwhile, hit the road following their breakout performance on Chapter 8 of Ripple's long-running split LP series, the Second Coming of Heavy.  Back in the studio, the band has new songs to unleash upon the congregated audiences.
Dates:
22.03. Gießen, AK44
23.03. RippleFest Cologne, Club Volta
24.03. Hertogenbosch, Willem Twee
26.03. Hamburg, Pooca Bar
27.03. Berlin, Toast Hawaii
28.03. TBA
29.03. TBA
30.03. Dresden, Veränderbar
Stream Plainride's "Life on Ares" here, and The Trikes side of Second Coming of Heavy Chapter 8 here.
Following up on the success of last year’s “Extremely compelling debut,” (Metal Hammer)  the German quartet, Plainride, are back to help contain the menace of many a sleepless night for scientists across the globe. With jetpacks on backs and the discovery of alien worlds in their sights, Plainride continue to explore worlds hitherto unknown, break new ground and assert themselves as the rising stars of Germany’s growing Stoner Rock scene.
“Every now and then, Cologne’s dusty streets bear something amazing. Plainride for example. These four guys shred out some heavy groovin’, fuzzy Stoner Rock that doesn’t fall the least bit short to their American colleagues.”
ROCKHARD
"Ripple Music continue their superb Second Coming of Heavy series with yet another two excellent hard rock/stoner blues bands worthy of your attention. Butt-kicking and gnarly-assed are two phrases that come to mind here " -- Desert Psych List