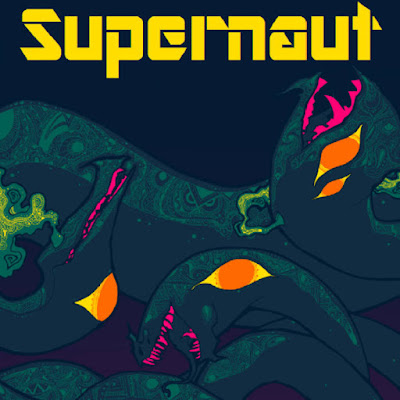 Sometime in the distant past…well actually it was 2016…I was attending a now legendary earth-moving event in San Jose known as “Beers In Hell” with about a zillion awesome heavy bands shredding the now closed Johnny V’s bar (R.I.P. Johnny V’s!) down to its’ concrete foundations, and one of the bands that caught my eye and ear was a Band called Supernaut.  I mean, really, how can you go wrong with a name like that?  Well, I suppose you could if you were just a cheesy Sabbath tribute band, but these guys were nothing of the sort.  There was a guy with his head down and hair falling down concealing his face as he wailed along with riff after riff of fuzzy, thick…riffs!  (Yeah, I know I used the same word three times in seven words, whaddya want from me?!?  This is a music blog not an 3000 word essay for a high school English final!!!)  There was another guy bobbing his head and hair thumping along with note after note of bassy goodness.  Then there was this clean-cut guy wearing nothing but a pair of shorts absolutely beating the living daylights out of his drum kit as a voice that was 50% Geddy Lee, 50% Rob Halford, and 50% first four Sabbath albums Ozzy (I always did suck at math…) projected from his lungs with the force of a wailing banshee. They tore through their set with a kind of controlled chaos, and even among a lineup of some of the Bay Area and California’s greatest underground heavy bands and quite possibly more than my usual level of beer consumption made a lasting impression on my riff addled brain that night. 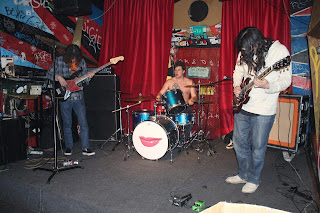 The musical progeny of brothers Sean and Oliver Niemann (drums/vocals and guitar respectively) and Will Iermini (bass), Supernaut, though bearing the influence of the godfathers of heavy metal as their moniker alludes to, manage to create a musical brew that reflects a much larger sphere of musical influences.  Supernaut’s furious thick bluesy riffing and nuclear fueled drumming paired with Sean’s high-pitched reverb-soaked vocals lends the songs a sense of psychedelic vibe, reminiscent of the mighty Cream, with time signature changes and breakdowns that would make any hardcore first-four albums Rush fan grin from ear to ear, delivered with a Sabbathy sense of light and shade, able to transition between mellower sections and uptempo hard rock fury seemingly with ease.  Supernaut’s debut promises greatness to come, while delivering the goods in the here-and-now with well crafted tunes that flow gracefully from the first song to the last, with production that allows space for the instruments and the music to breathe.  This is simply 37 and a half minutes of furious rocking spaced-out fun.  It’s available for free download on the band’s Bandcamp site, get on over there and don’t be cheap, throw them ten or fifteen bucks to put in the gas tank!  It will be the best ten or fifteen bucks you spend this week. 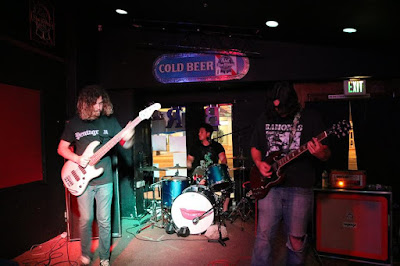