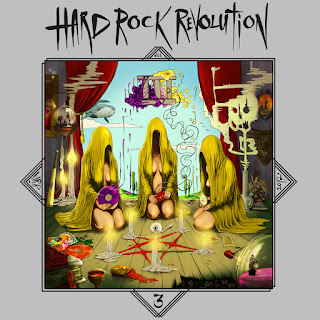 Who doesn’t like compilation albums? Sure, there are times where you just want to listen to a particular Band, but there are also times, where a good comp album does the trick. Especially when it’s loaded with killer bands singing killer songs. Lately there has been lots of cover compilation projects that have been pretty cool too, comprised of bands we all know and love putting their spin on songs we all know and love as well as b-sides we may not all know or love. Here are a few great comps you can find in camp.

Photos: Dallas Black Lives Matter Pro…
Moffat Camping and Caravanning Club S…
WWE stars The Bella Twins become New …
Mr Eazi & King Promise – Call Waiting…
Older adults (60plus) lockdown home w…
Hard Rock Revolution – Volume III
Make no mistake, the revolution is upon us. For real. The Hard Rock Revolution started as a web forum years ago, which amassed a tight knit group of like-minded music addicts, including myself and has evolved into a music community unlike most others. The folks are down to earth, minimal bickering, trolling prohibited and the music is the heart of all the hearts. Just push play on the latest carnation of underground hits.
The Hard Rock Revolution continues to revolt in the face of the mainstream. Vol. III brings you more killer hard rock, doom, stoner, psych tunes for an apt cross section brought to you by the fearless generals of HRR.
Bad Omen Records - Drums in the Deep
Bad Omen Records is a hot up and coming label specializing in hard rock, proto-metal and stoner sludge. They just released a comp album with various artists in their roster. Perfect entry into good fortunes of Bad Omen. Dig it!
Magnetic Eye Records – Electric Ladyland: Jimi Hendrix Redux
This soon to be classic remake utilizing modern hard rocking bands to pay tribute to the Hendrix album Electric Ladyland was a huge success. Not without a fight, Magnetic Eye Records was able to accumulate an all star cast to cover one of the greats with a wide variety of bands making Jimi their own. Great artwork, fantastic vinyl options and all around a really fun project to behold. Since them the label has released a Helmet redux project of their classic album Meantime, and currently working on a new undertaking of the intrinsic album The Wall by Pink Floyd. Interesting and challenging picks to say the least. But well worth the price of admission. Check out the companion albums as well which are more of a best of Hendrix.
Doomed & Stoned in Portland
The first of an impressive run of compilations featuring doomy and stoney bands in Portland, the Doomed & Stoned team led by the infamous Billy Goate, really got my attention and acted as a true album of discovery for me. I hadn’t heard of most the bands on the album and caught myself flabbergastic by several during the first listen. Dooomed & Stoned does a great job at getting these smaller, local based bands out into circulation on this comp series which spans regions world wide. So much material, you will get lost within the assortment the D&S has available on their bandcamp page. All for the reasonable price of free or you pick.
Dont let the size of this comp album intimidate you. I thought I'd heard it all and this disproves that foolish theory. Perhaps the best heavy compilation on all of bandcamp! So many unheard bands that absolutely rip. Blown away! Great introduction to what Portland heavy music has to offer. Great job Billy!!Favorite track: AntikytherA - Altars Before The Unseen.
Riding Easy Records: Brown Acid – Trip Series
In an ongoing series of compilations, Riding Easy Records showcases lost classics of obscure bands from the early years. I’ve bee collecting these on vinyl since they started and am committed until the end. Not only do they serve as a history lesson of how the hippies and punks used to trip out in the 60s and 70’s. Read the descriptions on each of the 3 available Trips. The Fourth Trip is currently up for pre-order and due out on 4/20 of all dates. Go figure right? Don’t sleep on this stuff. Trip on it instead.
These are just a few of the many compilation albums I’ve enjoyed on bandcamp. It’s nice every once in a while to push play on a compilation album that is well thought out and exhibits true talent across the board whether it’s a covers albums or all original material. They are fun.
-The Huntsman