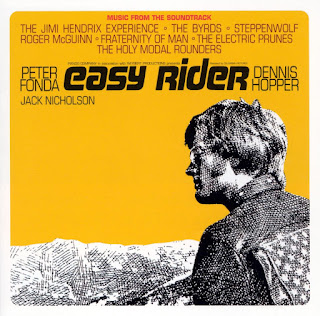 A new column where we dig into a new slab of vinyl sitting on the Ripple desk. What better way to kick this off than a brand new reissue of the legendary soundtrack to the film Easy Rider!

While these days, it's common to have a cool soundtrack made up of various previously released songs by modern bands, back in 1969 when this album and soundtrack were released, it was almost unheard of.  Usually, film companies would hire a band or musician to write a score, but that wasn't the case here.  Filmed on a tiny budget, director Dennis Hopper didn't have the money for a fancy score. So instead, he decided to license a bunch of songs that he'd heard on the radio.  With that, the soundtrack brilliantly kicks off with Steppenwolf and "The Pusher" before famously seguing into "Born to be Wild."

In what would be a moment of cultural synchronicity that would reverberate for the next 50 years, the use of "Born to be Wild" while Hopper and Fonda ride their chopped Harley's across the vast expanse of America.  A powerhouse moment of image and sound, it would forever integrate into the counter-culture the concept of freedom, wide open spaces, motorcycles and rebellion.  That single scene, more than any other moment, drilled the concept of "heavy metal thunder" into the cultural zeitgeist, locking into place the imagery of motorcycles and heavy music.  A key moment in the birth of what would become heavy metal.

The rest of the soundtrack isn't any slouch either.  While Capitol Records withheld the use of the Band's "The Weight" from the album (even though it was used in the movie), Dunhill artist Smith stepped in and recorded a near perfect copy.  Songs by The Byrds, Jimi Hendrix and Roger McGuinn add perfectly to the counter-culture, drug-fueled mood.  There are of course a few throw-away cuts, like The Holy Modal Rounders "If You Want to be a Bird," and Fraternity of Man's "Don't Bogart Me," but those missteps are more than made up for by the inspired use of Hendrix's " If Six was Nine" rather than a more commercial track.   Then there's just a cool as hell cut by The Electric Prunes, which comes across as some mix of garage Gregorian Chant with loads of fuzz.

The album and concept were a smash and the album peaked at #5 on the charts and was declared gold in 1970.

A definite blast of counter culture, hippy culture forever emblazoned onto a slab of wax.  For this reissue, the vinyl is a slick smokey clear, which adds perfectly to the flavor. Original cover and art.  All good.