A Ripple Conversation With Emil Ahlman Of Mammoth Storm

Mammoth Storm sounds like their name. It’s big, it’s powerful and full of doom. Having released Rite of Ascension and Fornjot and touring the European continent the last few years this storm is growing into a tornado although it spins very slow, heavy and doomy. Drummer Emil Ahlman took the time answering the ultimate test for a band: The Ripple Interview.

A Guide to Camping Clothing
Music Profile: Crissi Cochrane - Soul…
“The Friend Who May Not Seem a Friend…
MICRO BUSINESSES
Pampanga, Batangas, Laguna and parts …
What have been your musical epiphany moments?
Well thinking about some of the special moments when music has turned my world upside down one thing that comes to mind is of course when I was just a kid, but already a die-hard metal-fan for a couple of years, and heard some really down-tuned and guttural death-metal while visiting a record shop in Stockholm. At that moment I thought someone actually had been visiting hell with a tape recorder, ha ha. There are too many of those moments connected to music to mention here, but that one is still a cherished memory as it led me into a new world and a realization of what you can accomplish with just the regular tools for creating rock music.
Talk to us about the song-writing process for you. What comes first, the idea? A riff? The lyrics? How does it all fall into place?
The most common way for us to go is to start with a riff, and then put it together with some other ideas of how to make a Song out of it. Then there has to be some kind of narrative put in words as well and that part is often made when the structure of the song is almost complete.
Who has influenced you the most?
I guess it´s pretty obvious that our sound is inspired by early doom and death-metal bands combined with the later heavy stoner thing. When it comes down to personalities I have to mention Gylve aka: Fenriz of Darkthrone, though I think he is responsible for having one of the healthiest minds in the scene as he don´t give a flying fuck about what you think about what is cool or not. In that sense he´s a role model for sure. Funny and smart.
Where do you look for continuing inspiration? New ideas, new motivation?
That´s a tricky one. Inspiration comes and goes just like the cat and you never know when it will appear the next time. I get a lot of inspiration by walking, so that is the short answer. 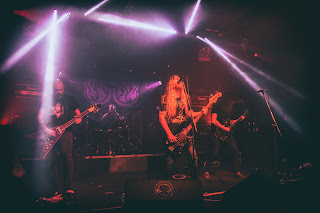 We're all a product of our environment. Tell us about the band's hometown and how that reflects in the music?
Nowadays we do live in different cities, but the little town called Säffle where we started is a bit boring so that explains a lot, doesn´t it? No, if I´ll try to make a serious answer here I think that we started to play together just to copy with everyday life in a small and somewhat limited place and that the gloom and doom fits our mindset at wintertime when it´s dark and cold and you just want to be reborn as a butterfly.
Where'd the band name come from?
The weather news.
You have one chance, what movie are you going to write the soundtrack for?
I think that some kind of sci-fi about a primitive future, a la Mad Max or something, would be fitting for us to write for.
You now write for a music publication (The Ripple Effect?).  You're going to write a 1,000 word essay on one song. Which would it be and why?
That would be the title track of our debut album since you easily could make that one into a longer story without watering it down.
What is you musical intention? What are you trying to express or get your audience to feel?
Thunder and might! We want our audience to feel fearless, strong and sweaty.
Come on, share with us a couple of your great, Spinal Tap, rock and roll moments?
We actually had some of that on our latest tour with Earth Ship and High Fighter, but I´ll only tell something that happened to me as I don´t want my friends to be angry with me. Ok, the tour went really well and at our fourth or something gig, that occurred in Nantes, France, I felt that the nerves from the first gigs were gone and that I was really comfortable with my playing and the very good sound that we got there. This great feeling made me a bit unfocused though, and in our second song I lost it completely at one part and played like shit the rest of the gig. After we finished I was very angry with myself and couldn’t find a way to let off steam so when we got to the motel in the middle of the night I remembered that I had brought with me a pair of really disgusting speedos that I got from my parents for some reason. With nothing but these on I spent the rest of the night and it actually made me forgive and forget my lousy performance. I´m not sure if the speedos are forgiven though.
Tell us about playing live and the live experience for you and for your fans?
I think that we definitely are a live act first and foremost. We enjoy playing live and the response while we´re out there has been fantastic!
What makes a great song?
When a song makes you move and when you remember it afterwards, there you have what makes it in my opinion.
Tell us about the first song you ever wrote?
The first song we wrote together as a band is called “Volcanic Winter” and if you haven’t heard it I think you should visit our Bandcamp site and have listen as it is really catchy. It´s nice to think back on when it got put together.

What piece of your music are particularly proud of?
I personally are very proud of all of the things we´ve accomplished so far, but the end of our demo song “Yersinia Pestis” is very melancholic in a way that I like a lot.
Who today, writes great songs? Who just kicks your ass? Why?
I´ve had my ass kicked by Blood Incantations “Star spawn” just before I started this interview. Otherwise I still think that the Finnish magicians of Oranssi Pazuzu are insanely good at what they do.
Vinyl, CD, or digital? What's your format of choice?
Vinyl is what I started with and I´ve never left so…never thought that cd´s were that fun even though I have a lot of them as well.
Whiskey or beer?  And defend your choice.
Both are fine, and definitely better than milk. Have to go easy with Whiskey though.
We, at the Ripple Effect, are constantly looking for new music. What's your home town, and when we get there, what's the best record store to lose ourselves in?
I live in a town called Karlstad and when you are here you only have one place to go, so it´s good luck that it´s a good one, and it´s a second-hand store/waterhole for all kinds of music lovers called “Knastret”. (Knaster is that sound you get when the needle spins on the record and there is dust and stuff on it.)
What's next for the band?
We´ll play in Oslo, Gothenburg and Budapest in the nearest future and we´ll also rehears and put some new songs together. Looking forward to it all!
Any final comments or thoughts you'd like to share with our readers, the waveriders?
Well, support good music by go to concerts and buy the records. Share a pint with us if we cross roads sometime.
-The Void
Find out more:
https://mammothstorm.bandcamp.com/
Live in Gothenburg 2015.

A Ripple Conversation With Emil Ahlman Of Mammoth Storm