Can We Please Get The Gaslight Anthem Back Together? 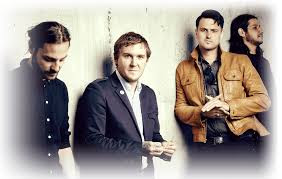 I’ve been on a Gaslight Anthem kick recently. You know, the rock band from New Brunswick, New Jersey? While I’ve been focusing on their last two records Get Hurt, and Handwritten, I have listened to their entire catalog multiple times. It not only reignited my passion for the band and reminded me how fantastic they are, but it also led me down a trip where I was listening to lead singer Brian Fallon’s other band, The Horrible Crowes. Their cover of Katy Perry’s “Teenage Dream” is truly amazing. Yes, I did just say that.

What are the Genres of Music?
Amidst Crypto Decline, BTC’s Trading …
Long Island Sounds May 2019
PS4 Exclusive Days Gone is the UK’s B…
AMERICAN POLITICS - Trump National An…
Brian Fallon’s ability with the written word is just uncanny. He is as intense a lyricist as exists in rock music and he is also one of the finest in his field.
Here are some key examples:
All my friends want to get in to Heaven
And all I keep thinking is I wish you were here
I heard that they’ve been calling me The Great Depression
Rollin’ and tumblin’ breaking my own heart again
… From “Rollin’ And Tumblin’”
I’ve been fumbling with your heart strings
And that’s good enough for me
And If I rained on one of your hours
Then I know I must be working
Try it on for size my darling
See what a man you can make of me
I will eventually haunt you
You will eventually be my queen
… From “Biloxi Parish”
You remind Anna, if she asks why
That a thief stole my heart while she was making up her mind
I heard she lives in Brooklyn with the cool
Goes crazy over that New York scene on 7thAvenue
But I used to wait at the diner, a million nights without her,
Praying she won’t cancel again tonight
And the waiter served my coffee with a consolation sigh
You remind Anna, if she asks why
… From “Here’s Looking At You Kid”
It is rare to find an artist that can write with such intensity and passion. I like to think it’s because he’s from Jersey like yours truly, but it is more likely that he was really blessed with the gift. And as great as solo Brian Fallon is (Painkillers is an exceptional record) it’s just not the same. The entire band needs to get back together.
The Gaslight Anthem went on their hiatus after recording and touring for the greatest album they had made to date. They went out on a high note, and they left their fans craving more. I was fortunate enough to see them live once on their Get Hurt tour and I was left mesmerized. Their live show is as superb as their albums. And then, shortly thereafter, the band announced their hiatus.
They were riding the wave to the top and then abruptly decided to halt their progress. Little information is available as to why The Gaslight Anthem went on hiatus. Brian Fallon has stated that “it was getting crazy” before they halted and that everyone was “relieved a little bit.” So, there may have been some undocumented turmoil going on within the band that caused the stop.
But with Fallon hard at work on his second solo album and amid a European tour, I don’t see The Gaslight Anthem getting back together anytime soon. There may be a better chance of getting Brain Fallon’s side gig The Horrible Crowes back together before The Gaslight Anthem reunites. And that’s sad.
The Gaslight Anthem is an exceptional band and it takes all four members to create the music they made. It’s not just Brian Fallon. It’s Fallon with Alex Rosamilia, Alex Levine, and Benny Horowitz. All of them together are responsible for the sound and the style of The Gaslight Anthem. And while Fallon may be the principle songwriter and lyricist in the group, I think it’s the influence of his bandmates that makes their songs so amazing. It’s the collective unit that produces a better creation. Again, Brian Fallon solo is great stuff, it’s just not The Gaslight Anthem.
Hiatus is a tricky word. A lot of bands have taken a hiatus and were never heard from again. Other bands have taken a hiatus and came back completely different with other members. I don’t think that would be the case here, as Fallon has stated he would never record under the name The Gaslight Anthem without all four original members. But I do think that hiatus is another word for finished. As much as I want to have them back, hear a new record, and see them on tour, I don’t think that it’s going to happen. It saddens me to state this, but I think we have seen the last of The Gaslight Anthem.
Perhaps I’m wrong. Maybe the time off has been good to the band members and someday soon they will realize how much they miss each other and get the urge to record music together. It’s possible, but doubtful. There are too many documented instances of bands going on hiatus to never return. And after almost three years apart it gets easier and easier to just continue to drift away. The Gaslight Anthem are an incredible force and now at the prime of their careers, they’ve turned away from each other to take some time off. It’s hard to find a particular level of success once, getting it a second time is near impossible.
So, while I may never get to hear any new music from the band, I will always have their five-album catalog, and it will always be in my regular rotation. And that will have to be enough for me. I’m just thankful that there was a Gaslight Anthem at all. Spectacular music is getting harder and harder to come by, but The Gaslight Anthem filled that void for a little while.

Can We Please Get The Gaslight Anthem Back Together?