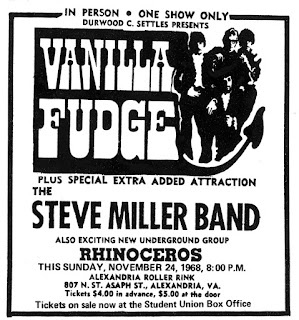 --The Steve Miller Band in 1967 or 1968, this show looks good! or maybe
when they co-headlined with The Doors at the Avalon Ballroom on April `14, 1967
The Steve Miller Blues Band, as they were sometimes billed, were to my mind, the best act that came out of the San Francisco psychedelic underground, and although Quicksilver can be good in spots, it wasn't really that close, either. Miller of course went off in a poppy direction during the 70's, but early on, before, as Thompson wrote, the tide rolled back, when I want to see his show, he was a dangerous man, and he had a dangerous band.

--Any of the American shows in 1968 headlined by The Jimi Hendrix Experience with The Soft Machine in support.
On September 9, at the Oakland Colisum, Vanilla Fudge also played, so maybe that one.
the Soft Machine's shows with the stretched out lineup from Third also entice, but the added attraction of Hendrix--despite my frustration with his more psychedelic efforts--puts these shows to the top for me. Play the blues, Jimi!

--Blind Faith at Hyde Park
Eric Clapton famously didn't feel the performance was up to par, but the excerpts I've seen look fine, so since I've already got the time machine, what the fuck.
June 7, 1969

--The Stones in the Park
The first gig after the death of Brian Jones, of course, and Mick Taylor's first show as well.
King Crimson, Family, and The Edgar Broughton Band were among those who provided support.
July 5, 1969

--Yes at the Hollywood Sportatorium
The Close to the Edge tour
First show on the second leg of the American portion
Something like Alan White's 25th show with the band
They played a lot of other gigs along this jaunt, and I've seen Yessongs, which is what this would be, but why not see them at their peak where I cut my teeth? Would have done it then, except I was 7 years old.
September 15, 1972

--The Sex Pistols at the Lesser Free Trade Hall
Manchester, England
If it was good enough for Pete Shelley, I know I'd like it.
June 4, 1976

--Wire's First American Shows, at CBGB's 1978
Funny thing about Wire is they played Hammersmith before they played America.
They flew to New York City two weeks after doing a show at the Lyceum, and basically did a weeklong residency at CBGB's, then flew back to England.
Any of the seven shows would work for me, except for the one on Tuesday July 18, when they weren't at CBGB's at all, but at a Theatre the club ran on 2nd Avenue. I visted CBGB's before it closed, but it wasn't in it's prime, you know? Thanks to my time machine, I'll check *that* out as well as the band, who of course IRL I've never had even the opportunity to see.
July 13 - July 21, 1978 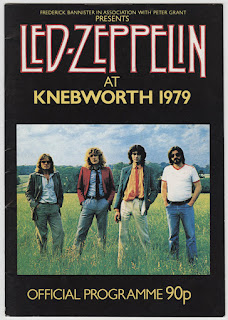 Knebworth Festival Second Weekend
Led Zeppelin's last UK show. Reputed to be a better gig than the one played the week before.
"Sick Again," "Achilles Last Stand," "In the Evening," among others more often heard live.
Todd Rundgren & Utopia, among others, backed up.
August 11, 1979

at the Hollywood Sportatorium
I was aware of the show at the time, I like Frank Marino, he was at his goddamned *peak*, I could afford it (tickets were only $5), and I even knew who the reformed Humble Pie were. Yet I didn't fucking go. Of concerts I could realistically have gone to, my second biggest regret. I later saw Steve Marriott, with another version of Humble Pie, but never did catch Marino.
April 19, 1980

--Volcano Suns/Big Black/Live Skull @ CBGB's
I wonder whether Albini has ever *set foot* in the State of Florida.
In any event, I got turned on to his band by a review of Atomizer in Spin and bought it shortly thereafter. Big Black neglected to play a show in my state before abruptly breaking up less than two years later.
I know a guy who saw them at the Touch & Go reunion show, and boy am I freaking jealous. Also, Live Skull's live show ca. 1986 was very well portrayed by that Don't Get Any on You thing, but by the time I saw them in 1988 at the Cameo, Marnie Greenholz had split and their sound was all wrong. So a chance to see them right. I knew Volcano Suns back in the day from that "White Elephant" track on The Wailing Ultimate comp, and I know now that they've covered "Needles in the Camel's Eye," but it wouldn't be about them, not really.
July 13, 1986

--CBGB 's Halloween 1986
Pussy Galore, primarily. Death of Samantha/Phantom Tollbooth/Kil Slug
OK, last show at CBGB's. But it was an important place. Two other Homestead bands who appeared on The Wailing Ultimate, but this is all about Spencer & Hagerty & Cafritz etc. I've got a copy of "Biker Rock Loser/Cunt Tease," sounds great. I mean, it sounds shitty, but it's supposed to sound shitty. Gloriously shitty, that's it. Anyway, Pussy Galore at their peak, 'nuf said.
October 31, 1986

--Any of the dates along Pavement's 1992 Slanted and Enchanted tour
They were at the 40 Watt Club in Athens September 12, so maybe that would be a good one?
Huge fan of the band since S&E came out, even wrote them a fan letter, but did they ever repay my fandom with a SoFla gig? No!
They pretty much suck for that, but I'll still give the time machine a spin to go 'n' see 'em.

--Any of the Generator Parties hosted in the Sonoran Desert by Sons of Kyuss, or Kyuss
How about this one? https://www.youtube.com/watch?v=hd_cV3zfQjs
which was May 18, 1993

--Nirvana w/ The Breeders @ the Bayfront Park Amphitheatre, Miami
My biggest regret.
Not that I didn't have a ticket. I did, along with my roommate. But I got sick. Really fucking sick. I remember lying on the couch in the living room, sweating bullets, hallucinating, without the barest energy to turn my head, and Tim left for the show, I hear him rather than see him, 'are you sure you can't make it' and I mumbled, "I'll see them next time." and the door shut and I was re-absorbed by strange fever dreams
I did see The Breeders 20 years later, and it was a good show, too, but it didn't work out as well with Nirvana.
November 27, 1993