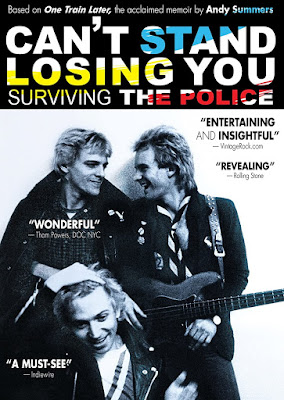 Caught this film over the last couple nights--free with Prime you know--and it's absolutely positively pretty good. It is indeed the story of The Police, but more primarily it is Andy Summers' particular version of it. Summers actually narrates, going back and forth between his own musical history and the then-somewhat recent Police reunion tour of 2007 and an opening of one of /his photographic exhibitions.

He spends some of that narration time with how he was in The New Animals with Eric Burdon, and he spends some time on Dantalian's Chariot (Flower Power Central!, as Pete Frame so pithily observed), so color me and dozens of fellow prog-rockers disappointed that Andy in this film didn't bother to mention being in The Soft Machine or making two albums with Robert Fucking Fripp.

But hey! There's lots of time spent on Summers' alternate profession of road photographer, and there's plenty of smack talk about Sting, which, let's face it, depends on how you feel about Gordon Sumner. The film sometimes descends into millionaire rock star self-pity, which definitely fuck you, you lucky and talented fuck, but overall, Summers seems candid, pulling no punches regarding the drugs he took or the groupies he slept with or the swollen ego he developed along with his bandmates at the apex of The Police's popularity. Which, good. Summers seems likeable, but his movie doesn't seem constructed to try and get you to like him.

Like I was saying, I could have stood more attention paid to the prog part of Mr. Summers' career and musical mind, and a little more time given to the absolutely distinctive guitar tone he developed with The Police--echoplex FTW-- but this was a good movie, one I willingly came back to after being interrupted in its viewing.