Comments at Other Sites: Ad Astra by James Gray 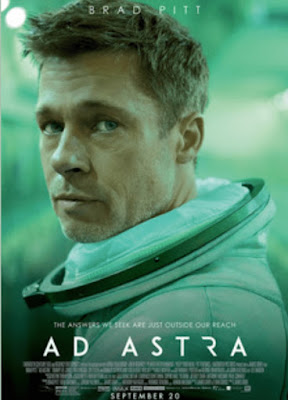 One of the few blogs I visit regularly is Approaching Pavonis Mons by Balloon, the irregularly updated blog named after a Flaming Lips song maintained by the Welsh science fiction writer Alastair Reynolds.

Back in October, he'd posted a Review of the recent Brad Pitt vehicle Ad Astra, with particular attention paid to what he felt was the lousy science. Reynolds used to work for the European Space Agency, so he'd know one way or the other.

I'd been keen to see the Movie--until I read his review. After having done so, it became more of a back burner thing. But I try to get to my back burner, too, and last night I finally saw Ad Astra. And I liked it quite a bit.

Because I'd never forgotten Reynold's review, I thought I'd go back to his site and comment on his review. Here's that comment:

A bit late but having finally seen it, the only thing I could think of was your excellent science-based review. The first review I read had talked about Applebee's on the moon, and I was like, kewl! But then after reading your review, I dropped the movie down a notch from 'buy when out on DVD', to 'watch when available to stream for free'.

Because I'm not a physicist, but unless persuaded to drop it for a little bit, I have an interest in, you know, the way the world really works.

But last night my gal and I found out that contrary to their ad we'd seen, Amazon was still getting six bucks for Motherless Brooklyn, but, hey, there's Ad Astra for free, and at least it will look good.

As you note, the movie immediately grabs you with the nonsensical tower/telescope, and, man, those struts don't look like fullerene to me--plus, anyway, you can make it out of steel and just put it in low orbit.

So not a good start, but sometime in the middle of movie, during another of Brad Pitt's talkovers, I thought to myself, said it to my gal, sheesh, that sounds like Willard from Apocalypse Now. Pitt--McBride--didn't say, I'd never seen a man so broken, but he might as well have. And it became clear to me as I watched from there, this movie is a conscious tribute to Coppola's masterpiece. Tommy Lee Jones was Kurtz, the best and the brightest destroyed from within, gone totally insane, and Roy's travels from the Moon to Mars, to the Mad Monkey station (!), to Neptune, mirror the travels of the gunboat up the river, progressively more atavistic, progressively more removed from the world of rationality.

Look at it that way, and suddenly the film becomes quite good, cognizant of the human issues it raises and of how film as art has dealt with these things before.

The details of Coppola's Vietnam gunboat voyage are to be sure more authentic than those of Roy McBride's segmented ellipses in Ad Astra. And Coppola's movie wasn't afraid of a dark ending, where Gray's had a sort of unbelievable reconciliation, but regardless, AA was in many ways a pretty great film. The fact that the science kind of sucked (and all the points you raise are valid, as you know better than I) doesn't take it from better than average to below average; it takes it from fully great to very good. It's a damn shame they (for example) had the main character swimming through the rings of Neptune somehow celestially guided, because this film had classic within its reach, had they just done the research.

Comments at Other Sites: Ad Astra by James Gray