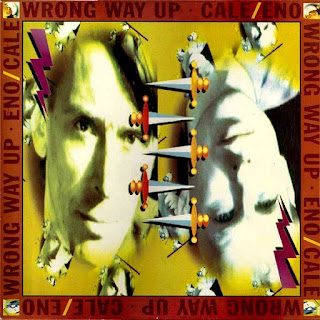 Back when it was new--and I was 25 years old--I eagerly purchased this compact disc. Oh, it was a time, man. The CD was packaged in--get this (if you can: most people today I would assume don't know what it had been)--a longbox. A theft deterrent then, and a music geek collectible now. Funny the way things transform, sometimes.

So. It being that time, I didn't know as much about Brian Eno or John Cale then as I do now, but I still knew Here Come the Warm Jets and White Light/White Heat. And because those records had been great, I expected Wrong Way Up to be pretty awesome.

Did I know then that the 3-1/2-minute revolution called "Sky Saw" featured Cale? Or that there was a cult Album named June 1, 1974 that featured them both?

Not sure. Wise now, was I wise then? 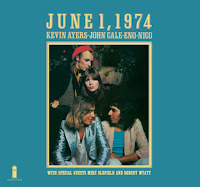 Anyway, the excitement before the purchase turned into disappointment afterwards. This album, it did not rock, it bore no traces of Warm Jets or White Heat, and it wasn't weird at all, and I sold it and I forgot about it as quickly as possible.

Lately though, nearly 30 years later, thinner of hair, and wiser of the music, man, I've been on an Eno jag, and I came across a review of the album on Pitchfork that suggested the album, synthpop though it was, achieved nothing less than brilliance in its rather conflicted creation.

Hell, I hadn't even known that the artists hadn't gotten along. . . . So I figured, what *had* I known, in my judgement 30 years ago? I'd been only 25, and had probably been a little bit um, over-influenced, by hardcore punk. My tastes are more sophisticated now! I could like an album that maybe wasn't so manic. Really I could. And shit, everything I've been doing for the last month was all about what a fucking genius Eno was. . . Maybe I'd been hasty in my dismissal of WWU back then, simply because it didn't sound like "Third Uncle," or "I Heard Her Call My Name." 'Cause hell, on reflection, thinking about it in 2019, in the midst of a Brian Peter George St John le Baptiste de la Salle Eno freakout, neither does "Luftschloss."

Goddamn, then, let's try it again, I thought. So last week, I bought a CD copy off Discogs. Received it yesterday, listened to it on the way into work this morning, and ... it's unabashedly awful.

It's lame, predictable, and without a trace of the genius which otherwise marks both men's work. You're tempted to say a few things, although you should probably resist the urges. You're tempted to say that it was a case of men outside the times attempting foolishly to sound like them, but that's wrong. 1990 had no great rush of synthpop albums. 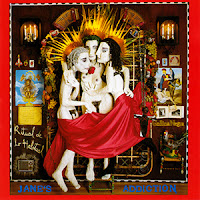 1990 was about Jane's Addiction; Jane's Addiction, and Happy Mondays and Sonic Youth's major label debut. Nobody was making synthpop. That these two major artists felt like going there, I don't know, it's odd, it's strange, it's fucked up.

You're also tempted to say, maybe, if you're not that familiar with the facts, that this was the work of giants who had exhausted their creative energies prior to its making, young lions become old farts. But, of course, that's ridiculous. Five years after this mistake of a record, Eno would record Nerve Net, which showed him as able as his youngself to stretch things out. And if you want pop, shit, Eno made Another Day on Earth in 2005, as he was approaching 60, and that is a brilliant, quirky, intelligent pop record, even if it's not as much like M83 as I might prefer.

Wrong Way Up is a detour into mediocrity. Definite, and puzzling, that is.

It all goes to show many things, perhaps most importantly--and I swear I'm not looking to trash Pitchfork specifically here--that if an artist known for making good things makes something crappy, there will always--always--be somebody around to tell people that, fuck the facts, it is in fact pretty good.

There's also the reminder given that I had the suss of the thing down back in 1990. I like to think of myself as smarter now, wiser if you have to go there, and I was prepared to second-guess myself, and take a lesson from it too, but at least in this case, me and the version of myself that existed three decades ago are smack dab in agreement. There's a stolidity about that I find appealing, but maybe, just maybe, there's also a disappointing inability to evolve.