Steph - Under My Bed (Official Video)

Sauce Alert! Rising artist Steph has been grinding nonstop to bring us nothing but sauce! Steph's highly anticipated new joint "Under The Bed" visuals & audio is finally here! Steph has been going hard with his music for around 3 years now. If you heard joints like “Past the surface” & the "demo tapes" which was a few older tracks on the site, you gonna love this. His versatility really puts him in his own lane. Not your regular R&B artist, his style ranges from classic R&B to singer/songwriter vibes to pop rock with rap influences. The way he incorporates pop rock vibes with hip hop is just too fire. The visuals was like gritty art which was dope. His voice in this was like magic. Since the last releases, he definitely stepped up his sound & cadence within his music. 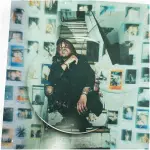 After Steph graduated with his public relations degree at West Virginia State University, he's been moving more like a brand than an artist making some power moves with his career. So free spirited & with the a voice like his, it just takes you away and have you in another space. His storytelling got so much better as an artist. He's a fun artist & you feel him when he speaks. He always giving out positive messages through his music. This year he's more focused on bringing attention to his music getting into blogs, doing podcasts, interviews, and music videos this year. While putting together his next few releases which are coming pretty fast one after another but we definitely gonna enjoy them when they drop. Steph is next to emerge with with his own sound, letting us know he's ready to deliver. He got our attention with this song right here! Make sure you tuned in & ready for those next releases. He's got a lot up his sleeve for the remaining of the year! Tune in! It's the countdown! Get with him on social media @RealLifeSteph & stream here!

This post first appeared on Hip Hop Indie Music, please read the originial post: here
People also like
Angels Landing at Zions
Hampton Cannabis Expo Founder Gary Bierfriend On Conference's 5th New York Season
How To Help Your Husband Get On Board With Prepping – Part 2
Drought Caused These 6 Famous Waterfalls to Dry Up
6 things you should not be wearing in 2022
Puffy Hair for Men: 8 Amazing Fluffy Hairstyles

Steph - Under My Bed (Official Video)