I’m sending up flares, but no one see…
The Best Place to Throw Sharp Objects
I Am With The Band ! (Fashion Edit)
3 Terrible Reasons To Ditch Your Sobr…
500 One Word Substitution Book PDF Fr…
BANGLES 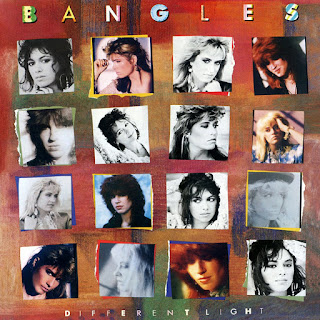 Bangles or sometimes referred to as The Bangles were a different class of Band than I was used to.  Bands were either all guy musicians or maybe had a female singer but this band was four great female musicans.  Susanna Hoffs, the Peterson girls Debby and Vicki and Michael Steele were not the bubblegum girl band that you see so many of today, they could play and wrote their own songs.  Sometimes I think they were a little underrated and everyone just knows of "Walk Like An Egyptian" and place this Song (as it was fun and quirky) in the typical female Pop stars genre that were to come.  Yes like most guys I had a big crush on Susanna (still do!) but I heard a couple of singles before the aforementioned song and bought this album and the previous debut following albums.  Great band.
Now to this album.   It was a breakthrough album for the girls reaching number 3 on the UK chart and also a massice hit in the USA.  Five singles were released from the album, the first "Manic Monday" was the band's first big hit and made number 2 in the UK..  The song was written by one of my idols Prince, amid rumours of some kind of romance between Susanna and the star.  It was perfect for the girls and was similar to Prince's other projects at the time, 60s style hippy-esque akin to "Paisley Park" and "Raspberry Beret" with subtle harmonies.  The second single "If She Knew What She Wants" just missed out on a top 30 slot at 31 and had a hint of Motown Soul feel like the singing groups of the time with a little more guitars.  Then came the song I mentioned earlier in this piece, the one most people remember as it was so catchy! "Walk Like An Egyptian" took the girls back up to top 5 as it reaached up to number 3.  The fast tempo chug-a-chug backing and guitar solos plus an incredibly catchy chorus, sing-a-long "way-oh way-oh" chants, Susanna's sexy breathy vocal snippet and whistling.  Add this to a funny video and a "dance craze" it was destined to be a massive hit.  "Walking Down Your Street" reached number 16 and took the band back to their debut album, 60s inspired Beat Pop combo style.  "Following" was released as the fifth single and only reach 55 and maybe a fifth was one too many singles as most people had the album already.  The song is an Acoustic ballad sung by Michael Steele in an almost Johnny Cash style, it actually reminds me of Procol Harum's "Whiter Shade Of Pale".
"In A Different Light" is a great Pop song, taking you back to the late 60s and early 70s which sums up all the elements within this album.  The catchy chorus, the beautiful harmonies, the Rock guitars are all here backing up Vicki's great vocal.
"Standing In The Hallway" surely has influences by Prince, The Cars and Talking Heads.  With its alternate guitar solo snippets of twangy Country and then funky slap bass style it is unmistakeably 80s Pop Rock.  Debby takes lead vocals for this track.
"Return Post" sees Vicki singing over an unusual Blues/Country hybrid amid little guitar solos and electronic keyboards.  Not my favourite track but then this album has high standards.
"Let It Go" sees all the girls on vocal duties in an almost Psychedelic track which reminds me of the likes of The Searchers, The Hollies and Mnafred Mann.  Nice little track.
"September Gurls" is a song originally made by the Rock band Big Star.  Michael takes centre stage on vocals in AOR Tom Petty And The Heartbreakers sound-a-like.
"Angels Don't Fall In Love" is a Country Rock style track sung by Vicki and also has a Latin feel at the end, for half the track it reminded me of Fleetwood Mac then Santana towards the end!
"Not Like You" sung by Debby, takes me back to the Mamas and Papas or The Carpenters.  A lovely, gentle song that is a nice end to a great album.
CHECK NEW MUSIC EAR FOR MORE COLLECTION FAVOURITES!