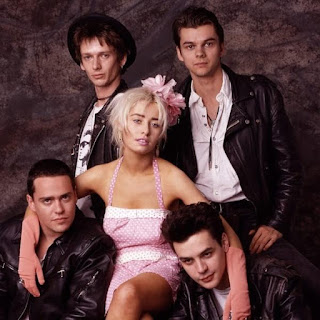 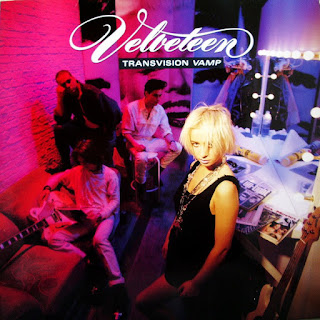 Transvision Vamp burst onto the scene in 1988 with their debut album, "Pop Art".  With the "sexy wild child" Wendy James as the frontwoman and some exhilarating Pop Punk tracks they stormed the charts.  Like I have said numerous times in these blogs the late 80s leading into the 90s was a scarce time for music in my opinion.  The "Vamp" were one of those bands that lifted the mood, like a New Wave/Punk band I loved their music and was very disappointed they split up after their next album.  I remember seeing this band in '89 at Birmingham's NEC and it was a brilliant show.  On top form Wendy, looking fantastic proved she was not to be trifled with as some idiot shouted, "Wendy take your top off!".  I won't say what Wendy said as younger children may read this but let's just say this silly boy won't ever do that again!

This album, the band's second, released in 1989 hot on the heels of their debut was a more "adult" version.  I mean it was a more sophisticated, more polished sound and reached the top spot in the UK chart, beating their debut that peaked at number 4.  Four single were released from this set, the first being the biggest, the big, anthemic beast that is "Baby I Don't Care".  The song reached their highest poisiton of number 3 in the chart while the next three singles also hit top 30.  It was bold, brash, guitar riffs a plenty and Wendy giving her best angry vocal and a massively catchy sing along chorus!
"The Only One" was the second single, reaching number 15 and had elements of Motown and Soul disguised in the throbbing, driving drums and guitars and memorable chorus.  "Landslide Of Love", the next single reached 14 on the chart and was a slower song than the previous two.  Again, the Motown and Soul elements were there but more at the forefront.  A really nice song.  The final single to be plucked from the album was "Born To Be Sold", reaching number 22.  Namechecking various celebrites such as Marilyn Monroe, JFK, John Wayne, Elvis Presley, Johnny Rotten and Madonna it was a minimal musical trakc with some twangy guitars in the style of Country.

"Falling For A Goldmine" is a slow paced soft Blues/Country hybrid with hints of Punk.  Great chilled track.
"Down On You" is pure Punk Rock with Wendy snarling her way through the lyrics with pumping drums and guitars and electronics backing her with gusto.
"Song To The Stars" is just under two minutes long and is a little lullaby-esque track.  Wendy is your storyteller singing softly.  Not your usual "Vamp" style indeed!
"Kiss Their Sons" is a very Heavy Rock/Grunge type track, thudding backing with Wendy growling in a low vocal tone.  Atmospheric electrics, screeching guitars and a mish mash of sounds, reminds me of early Blondie when they did a Punk experimental jam.
"Pay The Ghosts" is Pop Punk at its best, with hints of 80s Rock and 90s Grunge.
"Bad Valentine" has a seductive Wendy vocal, almost Marilyn Monroe like.  It is a minimal Country Blues track, love this track.
"Velveteen" the epic almost 10 minute ending to the album.  In my opinion their best ever track.  It has everything that Transvision Vamp are about.  The various angry, seductive vocals, the Punk styles, Rock guitar riffs and added to electronic ambuience.  This is the band's "Bohemian Rhapsody".
CHECK NEW MUSIC EAR FOR MORE COLLECTION FAVOURITES!

Is Sobriety Boring You To Tears? Here Are 7 Tips To Help You Break Out Of Your Sober Funk.