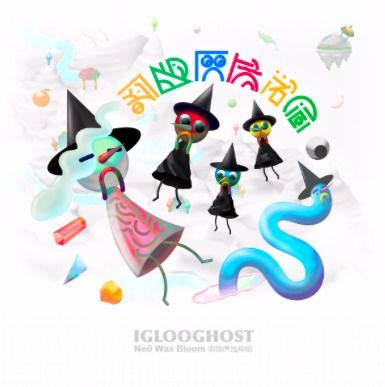 Iglooghost is the moniker of Seamus Malliagh, an Irish producer with a penchant for the surreal and high octane. 'Neō Wax Bloom', his debut album for Brainfeeder, lives up to this reputation. It is a chaotic whirlwind of a record, pummeling you into surrender with an unrelentingly onslaught of pounding bass and frenzied beats. We’re talking total sensory overload here; it is impossible to keep up with Iglooghost’s musical train of thought even if you try. Your only option is to submit and allow the Music to wash over you and scramble your brain.

Cat Coronavirus Diary – Day 18
Older adults (60plus) lockdown home w…
You Say Covid-19, I Say Hangar 18!
Everybody wants me, so when do I self…
Exhibit D: Lipstick and rifles--Ukra…
The word dense doesn’t even really begin to describe this record - such as the rate at
which ideas whizz in and out of play. The music is an amalgamation of a kaleidoscope of electronic subgenres; the frantic percussion of the Chicago footwork scene, the neon synths and squeaky vocal samples of bubblegum bass and the jumpy song structures of glitch hop acts like Prefuse 73 are all prevalent. Some of the tracks, such as 'White Gum', even incorporate sped up raps that bring them into grime territory.
As if the density of the music wasn’t enough it also all happens at breakneck speed and very little time is given for you to catch your breath. Whilst the album contains some pleasingly dreamy moments (see 'Peanut Choker's serene coda or the ethereal drift of the vocals in 'Infinite Mint') the music is never allowed to stay static for more than a few seconds before bursting back into overdrive.
Malliagh, who has only just entered his twenties, shows some serious potential as a
producer - it’s not easy to have so much going on and prevent it from sounding like a total mess. He somehow manages to keep the music on 'Neō Wax Bloom' clear and punchy despite its dense sonics and for this credit is due. Credit is also due to the level of imagination on display here; this is some seriously outside of the box stuff. Yet despite its strangeness the album is far from an exercise in self-indulgence, juggling a manic intensity reminiscent of Aphex Twin with its own fun and breezy sensibility.
Iglooghost’s style is certainly not for everyone - we are after all talking about dance music that is both impossible to dance to and somewhat headache inducing. It’s hyper-kitschy, guaranteed to alienate if put on at a party, and is kind of exhausting to listen to back to front in one sitting, but for open-minded adrenaline junkies 'Neō Wax Bloom' comes highly recommended. Fresh, original and exhilarating.