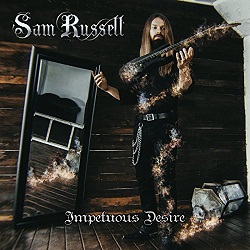 Top man that he is, Sam sent me a copy of his Impetuous Desire album to get my ears around. Not heard of him? Put that right – and fast!

A guitarist of vast talent and ability with Impetuous Desire a remarkably clear statement of intent.

A shred-fest and then some – but not soloing for the sake of it to say “how many notes can I play in half a second”.

Sam’s playing is indeed spectacular however has much feel behind it that his impressive work does not overshadow the Song – it complements it.

In addition to supplying me with a copy of the album, Sam took some extra time to answer a few questions to help you become better acquainted with his music.

Before that – check out this ripper from the album – it’s called Tonight:

Here’s the interview with Sam.

NOWBHM: Sam Russell may not (yet) be a name familiar to some. What do we need to know about you by way of an introduction?

SR: I like to keep my life simple. I play guitar, work on my music, work on my mind and work on my body. I practice, read, and lift. I figure that by doing this, and being at least semi consistent, I can get pretty good at a few things in life, rather than being ok at many things. That isn’t to make a value judgement on one method or the other, that’s just what I want for myself.

NWOBHM: On Impetuous Desire your playing reminds me somewhat of Michael Schenker. Who would you say are your main influences/inspirations and the part they’ve played in developing your style?

SR: That’s cool, thank you! I loved his work in the Scorpions. I looked up to him a lot when I was a kid learning to play – he really went for it and earned himself a great start in music.

My main influences were Yngwie, Satriani and Vai. When I got the G3 in Denver DVD as a teenager, I watched it over and over, I loved it! As I got older and branched out to listening to a lot of different music, baroque, classical, some opera, a tonne of metal. I learned a couple of Bach’s cello suites on guitar, so that has probably had some influence! I listened to pop songs trying to figure out why people liked them, and if there was something I could from them. So Impetuous Desire is a bit of a melting pot of all sorts of influences coming into play.

Another influence has been from my guitar teacher, Tom Hess. His lessons influenced my playing a lot in recent years. He has some students that are killer players, and I’ve been paying a lot of attention to their playing too.

NWOBHM: You have a couple of notable names performing up on the CD – Doro Pesch and Jason Bowld. How did their involvement come about?

SR: I went to BIMM Bristol for a year after completing my masters in astrophysics, and Jason was a drum tutor there. So I knew about him. He is probably one of the hardest working drummers on the scene! When I finished writing the songs, I hired him to do drums on the record, and he totally smashed it. He did the entire thing in a day – it was mental how fast and to how high a level he worked. Very inspiring. I made a mental note that I wanted to achieve the ability to work to that level – I’ve still got some way to go!

When I was writing the song Leigh Woods, I knew I wanted a female singer. So I brainstormed who I wanted… and ended up with one! I knew it would be great with the incredible Doro Pesch singing it. So I get in contact, and a week or so later get a reply from her manager saying she loved the song! And before I know it, I’m in Germany in a recording studio with Doro and she’s singing my song – pretty amazing!! That has got to be one of my best life experiences so far.

NWOBHM: Is the neo-classical style of Impetuous Desire one you think you’ll follow with future recordings?

SR: It’s something I want to develop for sure. There are a lot of areas I’m working on to improve for the next album. I almost see the albums as a record of my progress as a musician and a composer. When I figure out something, or make a distinction I hadn’t thought of before, or find something cool; I want to put it into a song.

I’m working on getting a more in depth and musical knowledge of slightly more exotic scales, so the next album will have some more variation, modal ideas, and exotic ideas from the melodic minor, hirajoshi and byzantine scales. Trying to figure out how to use these scales to create a conversation is challenging (for me at least), but also fun. But it’s important to me that they serve the song, and as much as I enjoy a good shred, it doesn’t descend into the use of scales for the sake of it. If they don’t serve the song, they don’t get used.

NWOBHM: What’s your view on the range of promotional opportunities and various outlets for music the internet offers – streaming, downloading, social media and the like? Does it make life easier or harder to get music “out there”?

SR: I think that if you know what you are doing, then it makes life much easier!

Fortunately there are people like yourself putting together killer websites that search for new music to introduce to the world. Thank you for your work and your service to music.

When I started promoting the record, I had no idea what I was doing! I had some false premises when it came to promotion, made a tonne of mistakes, and wasted a lot of time and money. But I’ve learned from my mistakes, figured a few things out, and I’m slowly figuring out the rest of the puzzle. Tony Robbins talks a lot about “modelling successful people”…. so I’m slowly reverse engineering other musicians’ careers to figure out the steps I need to take.

It’s important to have a big picture strategy about how all these pieces work together – if you are not congruent, you can end up with one piece working against another, rather than having all pieces re-enforcing each other. It’s something I’m still figuring out.

NWOBHM: What next for Sam Russell – any plans for a follow-up to Impetuous Desire and/or gigging?

SR: I’ve started writing the second record, I’m putting a band together and we will be doing full on heavy metal shows later this year. There might even be some acoustic sets happening and I’m looking at putting on some workshops for guitar players.

The big thing has been to figure out the weak points I had in the last record, in terms of playing, song writing, marketing and promotion; and figure out how to improve them all on Record #2. A cool thing with the music industry is that your next record is another chance… at whatever you want.

I think the first couple of years of my career will be a textbook on “How to screw up being a professional musician”!

When I make it out the other side, I’ll let you know what works!! In the meantime, check out Impetuous Desire and have a listen, if you love your NWOBHM, you’re going to get a hell of a kick out my record for sure.

My thanks once again to Sam for the opportunity to listen to Impetuous Desire and also for his time in responding comprehensively for the interview.

A “gentle reminder” to visit Sam’s web site to learn more and bag yourself the album:  http://www.samrussell.co.uk/