Karrier: Way Beyond the Night Review 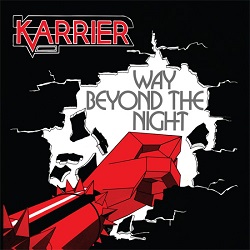 Here’s yet another “lost” New Wave of British Heavy Metal era band back from the beyond. Karrier were one of many back then looking for the breakthrough. Perhaps their time came a little late, which is a shame as they had the chops to have longer than circumstances allowed.

Robb Banks Talks Anime, Music And Lif…
Vehicle Preparedness – Preparing for …
10 Fastest Things in the Universe
How to Take Proper Care of Your Teeth

A high profile support slot with Magnum and a positively-reviewed album didn’t cut the mustard with “the business” and that was that…………….until now. Sonic Age Records to the rescue and we can all enjoy Karrier again.

Way Beyond the Night is a fine slab of nostalgia deserving of attention. The style is (as you’d expect really……) mostly “traditional” NWOBHM with the fast riffs, punchy drums and muscular soloing – for example I’m Back and Too Late and Running for Your Love – yet not without melody.

More to Karrier than that as they stretch out with the semi-power ballad of Summer (nice variation in speed and keys to big out the sound some more) and my personal favourite to The Night/Way Beyond the Night which is a mini-epic all of its own. Why not give it a listen now?

Original Karrier guitarist Chris Clowsley got in touch about the album and kindly answered a few questions to add some historical context.

NOWBHM: Always nice to see a band from the good old NWOBHM days see the light of day again. How did the involvement of Sonic Age Records come about to have Karrier’s output available now?

CC: It had come to my attention that there was still an interest in Karrier as the original vinyl was selling on eBay. Then completely out of the blue I received a Facebook messenger from Manos Koufakis from Sonic Age asking if I was the Chris Clowsley from Karrier as they love the album and offered a deal to ‘re release it. I contacted Ian Hall as we wrote the songs and he was up for it.

CC: The reaction so far has been great on social media. Lots of likes for the taster post. Early days yet re sales but you never know.

NOWBHM: Arguably what Karrier may be remembered for from “back then” is the support slot with Magnum on the Storyteller’s Night tour. Any memorable anecdotes from touring with them you’d like to share?

CC: The Magnum tour was such good fun. They had a luxury Star Rider coach. We had 2 old Ford Cortina’s and a 5 birth caravan in tow. After gig parties were invariably in the caravan. Bit of a squeeze as Magnum’s crew liked to too

NOWBHM: The tour didn’t give the band the big break it might have been expected to. Were there any particular circumstances which prevented it or was it perhaps a case of too much competition in a crowded market.

CC: During the tour the album came out and had some great press reviews. I remember a good one by Kerrang magazine. Unfortunately at that time Radio 1 were pretty much the only avenue for air play and there was no chance there. Also I think we missed the boat a bit as Maiden Saxon etc had become established and newer nwobhm bands like us got overlooked.

NOWBHM: I notice that the CD booklet hints that there may be a Karrier reunion, possibly even gigging – how likely is that?

CC: Here’s the good news. Myself and Ian have put the band back together with Andy Dodds lead vocal. Andy sings with The Paul Raymond (UFO )project. Ade Hill on drums. Ade is in Dr and The Medics. Paul Gaskin on bass. Paul plays with tribute band Mentalica. We are playing in Wolverhampton on Friday March 16th supporting my other band also 80’s NWOBHM Stampede at the Gifford Arms. We are also playing the Slade Rooms Wolverhampton on September 21st supporting Iconic Eye.

I bagged my copy of Way Beyond the Night directly from Sonic Age Records. Why not do that same? Here’s the link: https://sonicagerecords.com/_shop/

Thanks again to Chris for his time.

Karrier: Way Beyond the Night Review