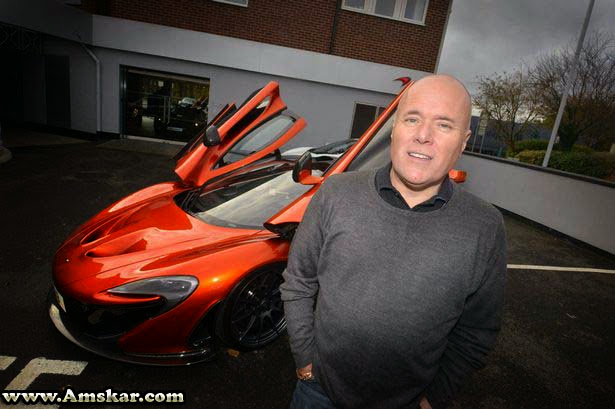 Article by : David Sebastian
The people the P1 needs to impress most are those paying £866,000 to buy one. We speak to one man who’s already go this, and maybe another who is on the waiting list.
P1. In case we were in any doubt, the name says it all. McLaren’s tech-red successor to the F1 has no intention of playing second-best to the other hybrid hypercars on the block from Porsche and Ferrari. We can’t pick a winner from that particular scrap just yet, but we have spoken to a couple of people with enough faith in McLaren’s track record and ambition to have already signed on the dotted line.
Paul Bailey, racing driver, BMW contributor and ‘modern supercar collector’ (his description), took delivery of his Volcano Orange P1 just before flying to Spain. He specced it with the Stealth Pack, exposed glossy carbonfibre and the upgraded Meridian hi- for those trans-Continental trips when you need a musical massage rather than your scalp tingled. When we speak to him, he’s desperate to get back, take it on track and‘ drive it until the weather becomes so bad that I can’t any more’. He’d like to drive it through the winter too, if McLaren could supply winter tyres. They aren’t available yet, but one reason Bailey has dived in with an early P1(despite the 27 recalls on his equally early 12C coupe) is his belief in McLaren’s can-do attitude and, in his experience, its peerless after-sales customer care.
It’s a theme reflected by the Supercar Owner, who won’t take delivery of his P1 until 2015 but is thinking more along the lines of a low-key approach with muted colours (probably no orange). But he is con dent he’s made the right decision: ‘I think McLaren considered me as a 12C Spyder owner with a long history in supercars and not someone they could extract a consistent amount of cash from,’ he says. ‘I’ve been very well looked-after and that’s certainly a factor in my decision to buy a P1.’
There’s got to be more to it that that, though. You don’t stump up £866,000 (1,398,358 USD) for a P1 just because you’ve got a 12C. Bailey’s insatiable need for speed will eventually see a Porsche 918 and a LaFerrari join the McLaren in his garage, but he calls the P1 his hypercar of choice. ‘I’ve been so impressed by the 12C that it’s impossible for the P1 to be anything other than a totally awesome car,’he says.‘I intend to use it to the full. The first questions I asked were: “What’s the service interval?” and “Can I get spare parts if I bash it?” That’s the reason I got the car: I’m going to drive it. I’m not going to stick it in the garage and polish it. I also can’t believe it’s the only car I’ve ever bought that has zero running-in. McLaren runs in everything – the gearbox, the differential, the suspension. Even the carbon-ceramic brakes are bedded in. You can literally wait for the car to come up to temperature and cane its arse if you want to.’
The SSO says he never seriously considered the 918 or, perhaps more intriguingly as the owner of an F40 and an F50, the LaFerrari: ‘For me, it came down to who has produced the best supercar ever. In my estimation, that crown’s held by the F1. So as the P1 is the natural successor to the F1, I decided to go with the P1. That was one aspect; the other was that I never really bought into the whole Ferrari thing of having to buy X, Y and Z before you could be considered for a LaFerrari.’
But what if the P1 manages to be at the 918’s 6:57 lap of the Nordschleife only to be buried by LaFerrari? ‘I think it’s a total nonsense,’ says Bailey. ‘If you had three different drivers and raced the three cars, the result would have nothing to do with the cars, it’d be about the drivers. I think the Ring time is important to people who spend their time on the internet. People who buy the P1 won’t base their decision on the P1 being 1sec faster than this or that.’
The SSO concurs: ‘I absolutely couldn’t care less. In terms of it affecting a purchase decision, it’s completely irrelevant, though all the internet coverage is amusing. But how it relates to the way the car actually performs in the real world, I don’t think it’s relevant. I’ll probably use the car for a combination of long multi-day road trips and occasionally scaring my self silly on the track. I don’t intend to use it every day. The 12C is much better-suited to that.’
Bailey perhaps takes a harder line when it comes to extracting the most from his P1, and despite his ongoing success driving a Ferrari 430 in the British Endurance Championship, he intends to participate in McLaren’s driver training programme for P1 customers: ‘Any driver training you can get, I think, is critical. I believe one of the reasons I’ve had such a successful racing seas on this year is because I’ve got a full-time coach. I believe that coaching is what makes people really quick.’
The SSO finds resonance with McLaren’s Formula 1 provenance – ‘it’s probably one of the reasons I’d rather have a P1 than a Pagani or a Koenigsegg’–and would love to take part in the training if he can find the time. But first he’s got to sit down and think about how he’s going to spec his P1. Lucky man.
Second Mclaren P1, Paul Beily, Second Mclaren P1, Paul Beily, Second Mclaren P1, Paul Beily, Second Mclaren P1, Paul Beily, Second Mclaren P1, Paul Beily, Second Mclaren P1, Paul Beily, Second Mclaren P1

Are there Differences between Real an…
Best Things to Do in Cadaques, Beauti…
Urban, Suburban, or Rural Practice: P…
35 Sanity-Saving Moving Hacks For Fam…
Day 4 – How to Rehab a Painful Should…


This post first appeared on AmisCar, The Home For Definitive Car News ., please read the originial post: here
People also like
Are there Differences between Real and Online Blackjack?
Best Things to Do in Cadaques, Beautiful Town in Costa Brava
Urban, Suburban, or Rural Practice: Pros and Cons
35 Sanity-Saving Moving Hacks For Families
Day 4 – How to Rehab a Painful Shoulder
Twitter Opens Account Verification Program For Everyone; Here’s How You Can Apply
Why I Chose to Be Vaccinated Against COVID-19