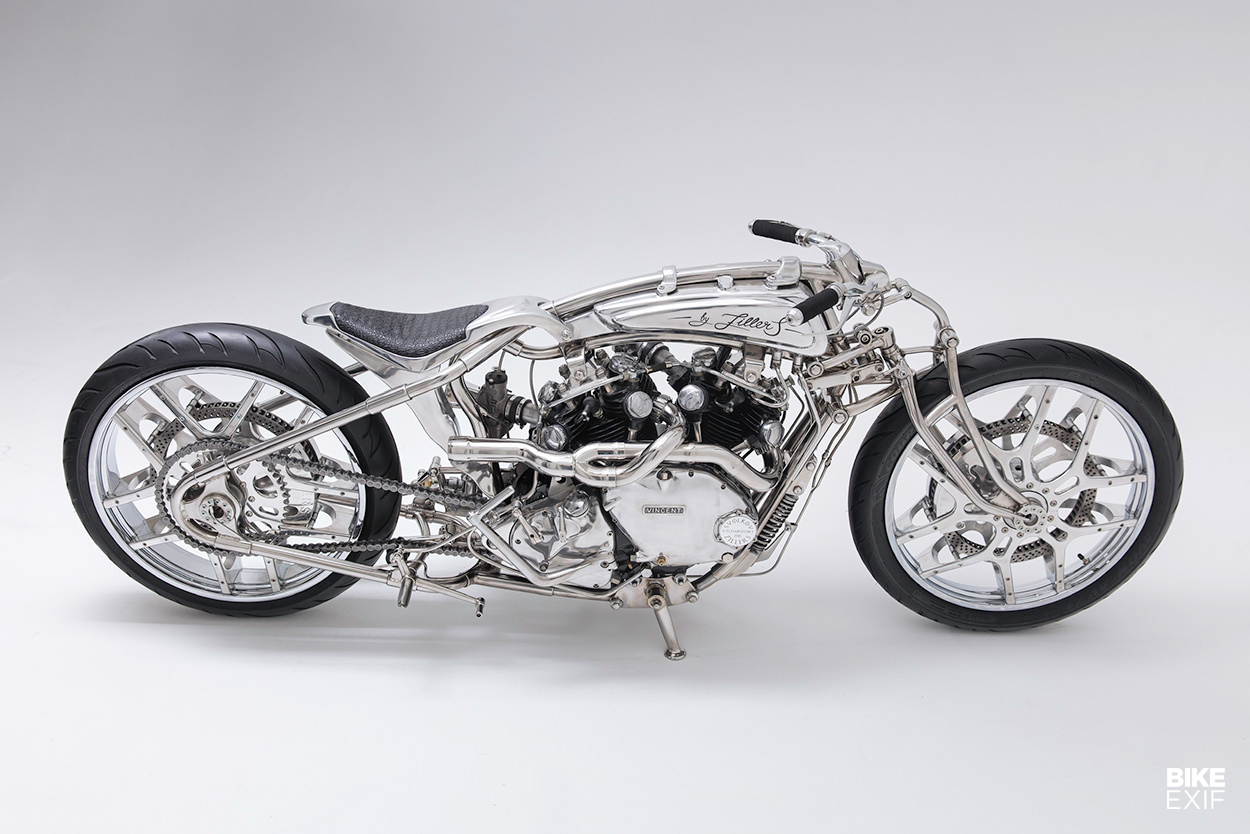 Dmitry is now back with another jaw-dropping creation, and we reckon this one could sweep the board too. It’s based around a Vincent Lightning Engine, but virtually everything else is made by hand.

An Honest Review of Tripmasters.com
Global Cryptocurrency Giant, BINANCE …
NVIDIA GeForce RTX 2060 Super and 207…
Google News: Learn how to do SEO for …
5 Proven Steps to Online Success in A… 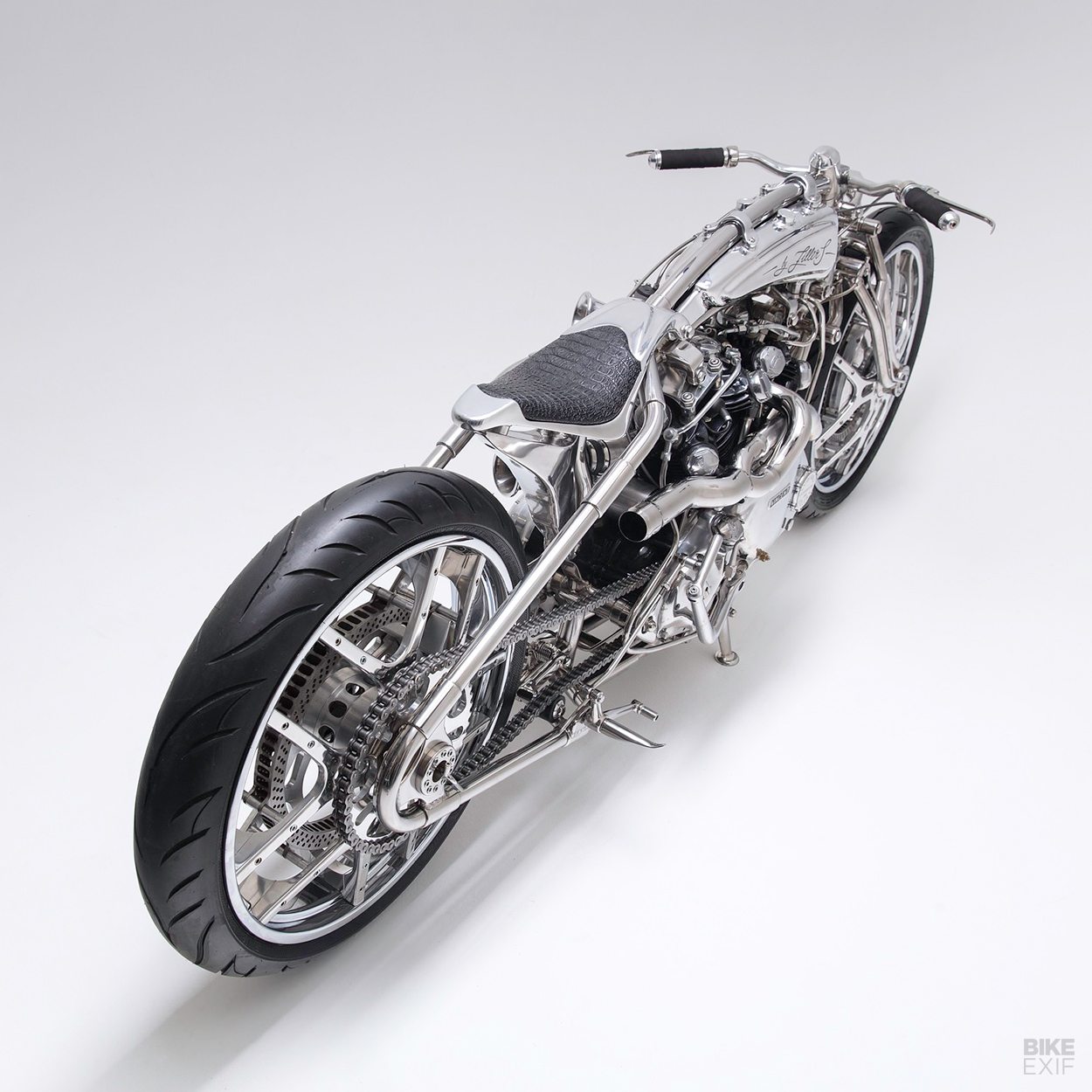 Dmitry was born in the Republic of Karelia, near the Finnish border, and now lives in Moscow. His workshop is called Zillers Garage, but he usually works alone unless the job sheet gets too long.

A Zillers bike is a unique creation crafted around an existing engine. In this case, the engine is a 1200cc Vincent Lightning replica built by the English company JMC Classics, which is also licensed to produce new Egli-Vincent motorcycles. 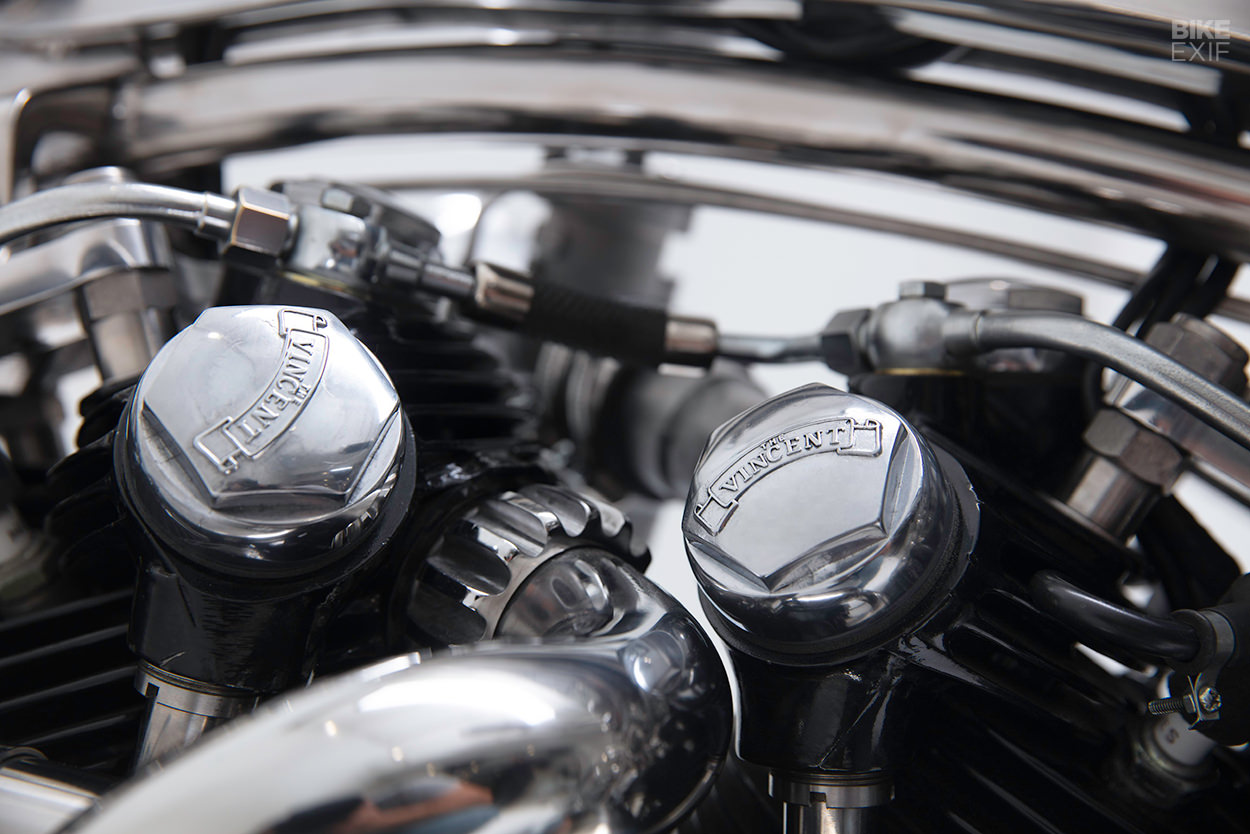 “I purchased the engine five years ago in England,” says Dmitry. “I’ve always been a fan of Vincent engines, and as soon as the opportunity arose to buy one, I decided to customize it.”

“The engine is ‘new’ and was already prepared for active riding. Dell’Orto carburetors came with it, but I decided to abandon them and use BMW carburetors. The intake manifolds are cast in aluminum, and the gearbox has four gears.” 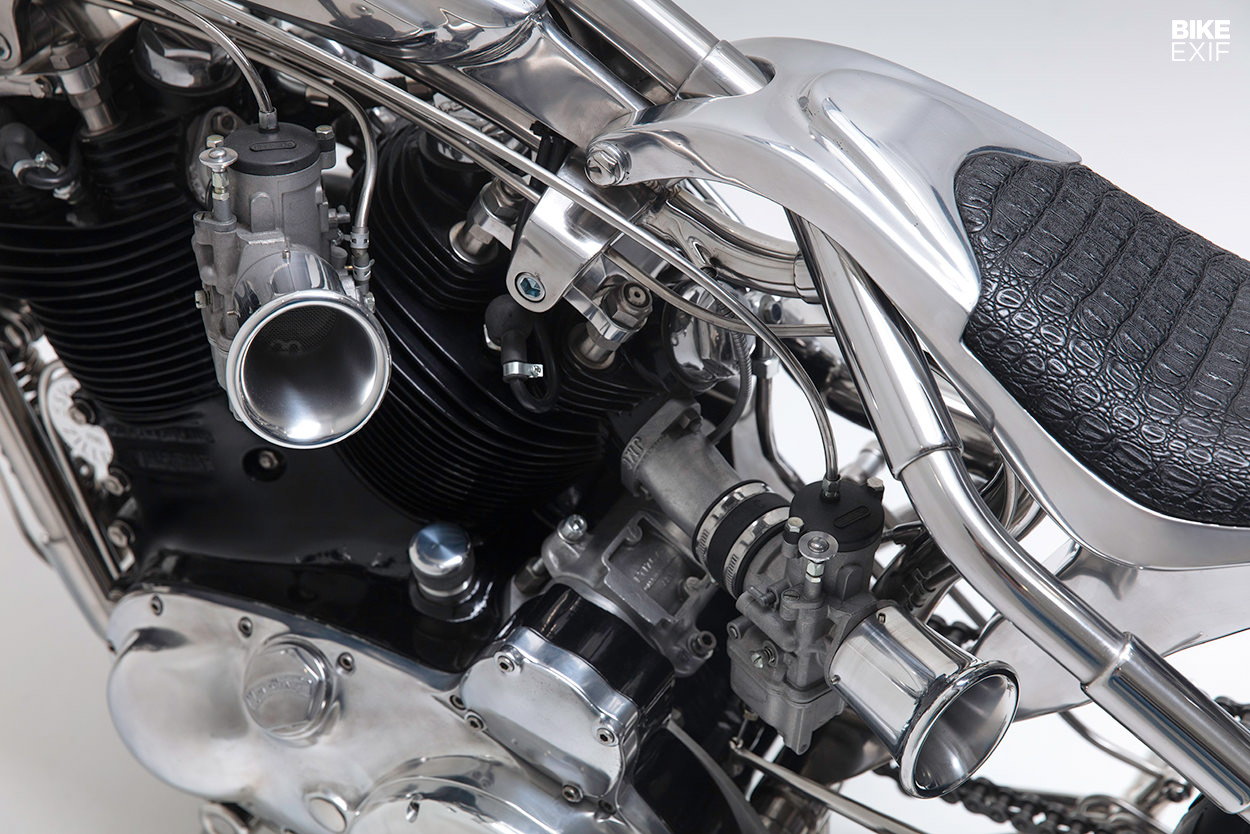 All the oil and fuel lines are custom-made using Stainless Steel, and it looks like Dmitry has used very early Bing carbs.

At the exhaust end, he’s built a sinuous system out of stainless steel. No pie-cut welds here: just a few perfectly socket welded pipes converging into a single length of muffler… that we suspect doesn’t muffle very much of the magnificent pushrod V-twin at all. 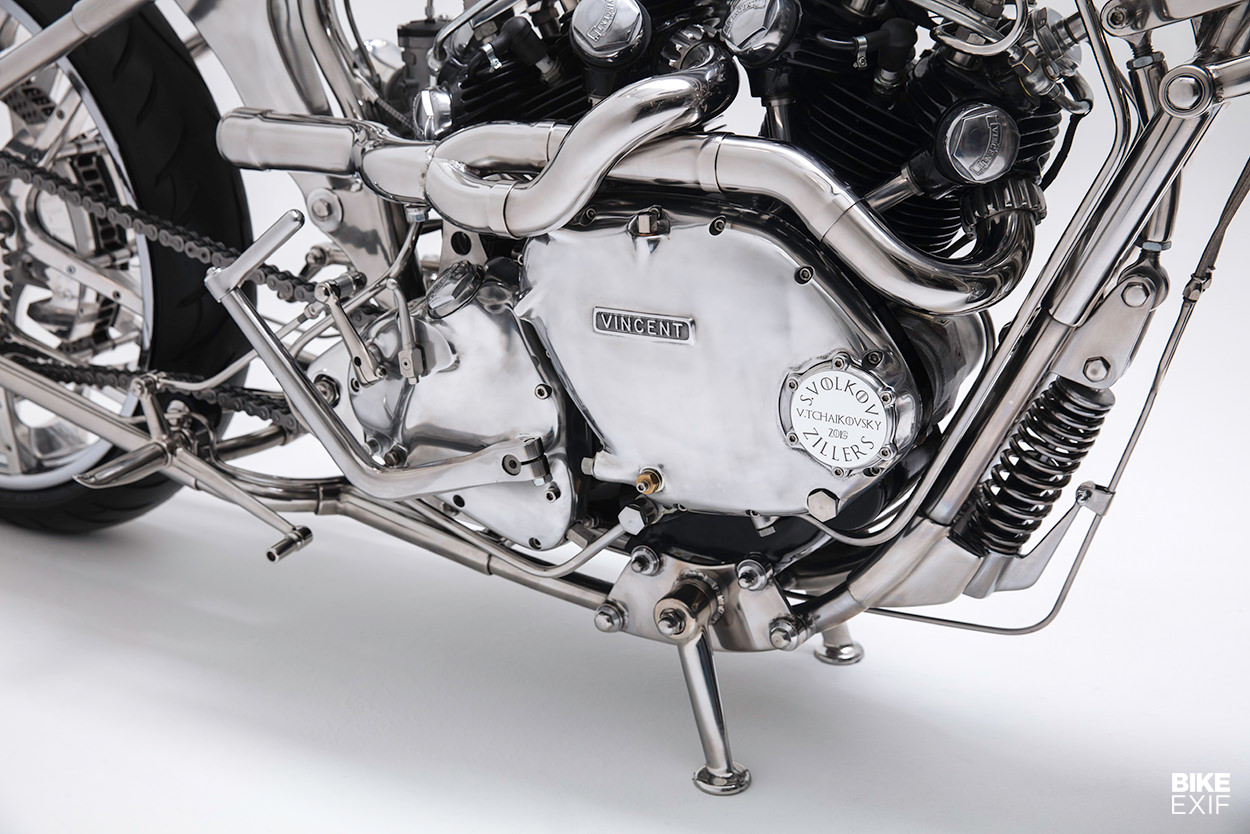 Before working on motorcycles, Dmitry was a high-end motorsport mechanic. And that’s how he refined his amazing fabrication skills: the frame, front fork and control levers on this bike are made out of stainless steel, and the seat unit, bars and gas tank are made from aluminum.

Since this is a high-end show bike, the fabrication is anything but simple. The forks are a duolever design, similar to that used on BMW’s K series bikes. “The main advantage is that the steering is connected through a linkage, and vibrations from the road are isolated,” says Dmitry. 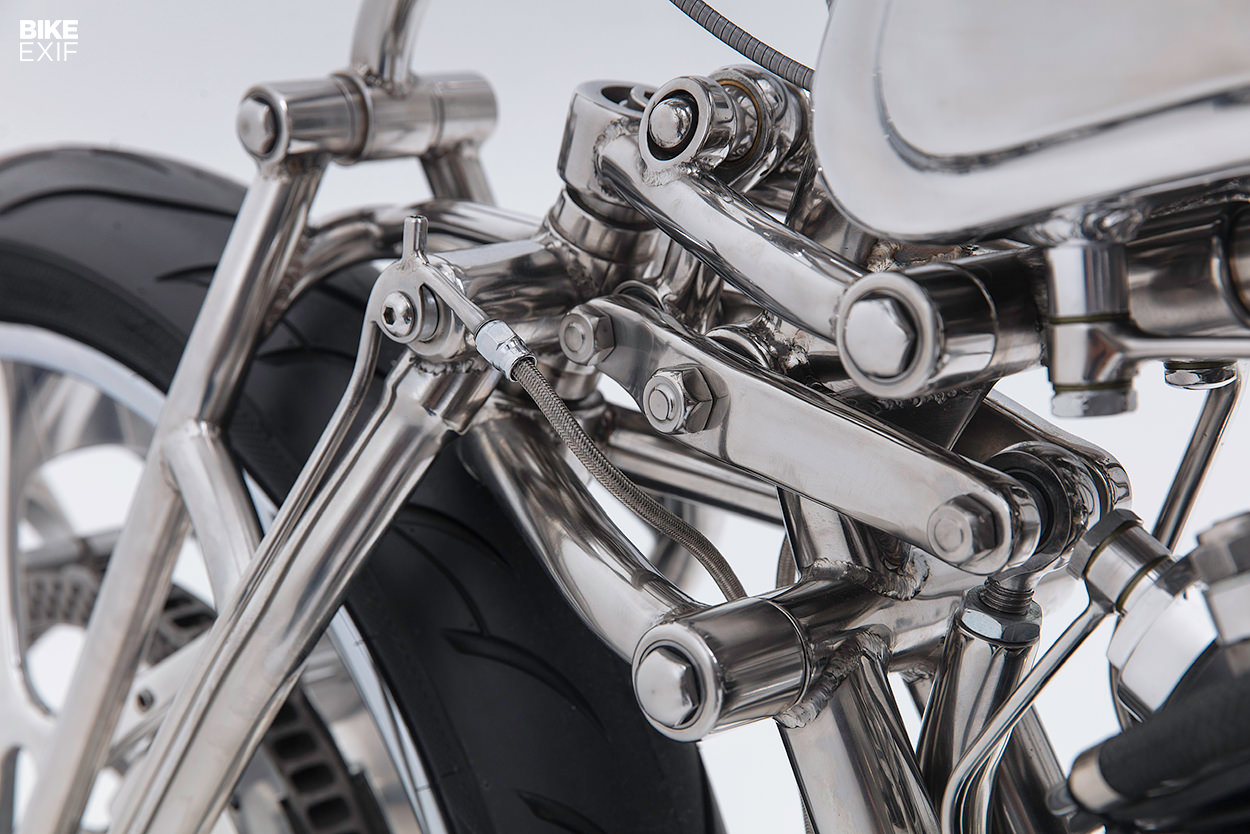 It’s also a remarkably elegant-looking setup, which will help at show time. Dmitry has machined this arrangement himself, with cushioning provided by a spring at the bottom front of the hand-made frame.

The wheels are one-offs too, with chrome-plated steel rims shod with Avon Cobra rubber. The center section inside each rim is machined from aluminum, and hooked up to twenty spokes per wheel—each one individually CNC machined. 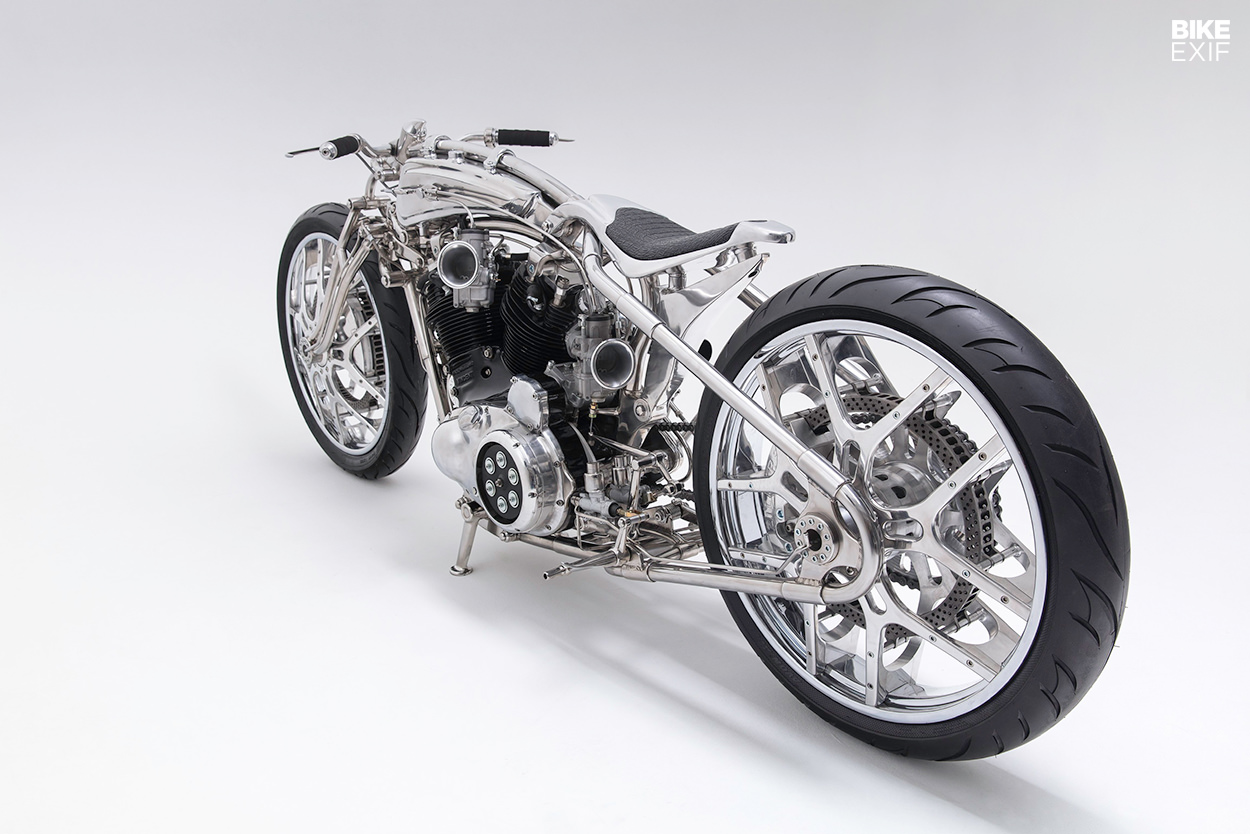 Look closely and you’ll see that the brake discs and calipers are inside the spokes of each wheel. The discs are machined out of cast iron. “The brake lines with fluid pass through the center of the wheel,” Dmitry explains. “The hub itself is empty.” 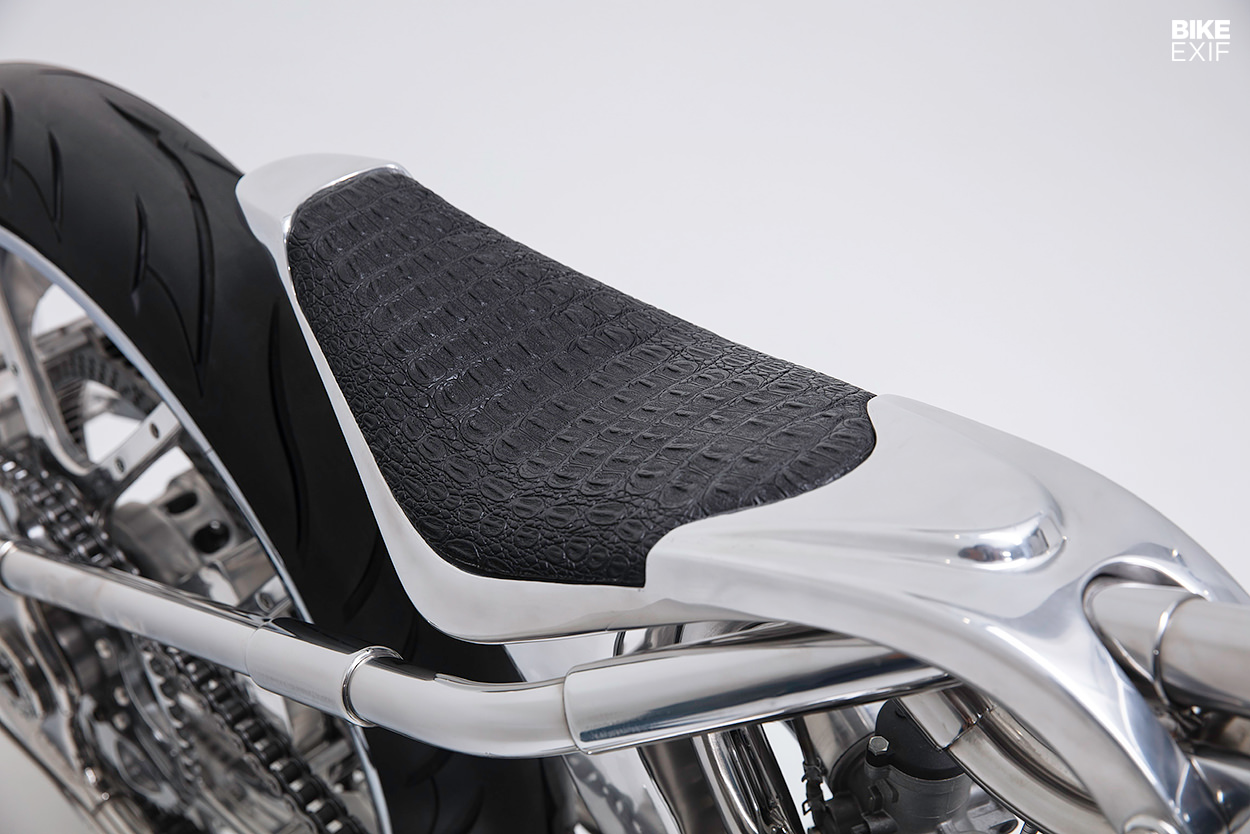 The Zillers Vincent is one of those machines that justify a very close look at the images.

The craftsmanship is off the scale, and the design is fascinating too: note the way the rear frame tubes snake under the seat unit, which is trimmed with crocodile skin, and reappear as one. 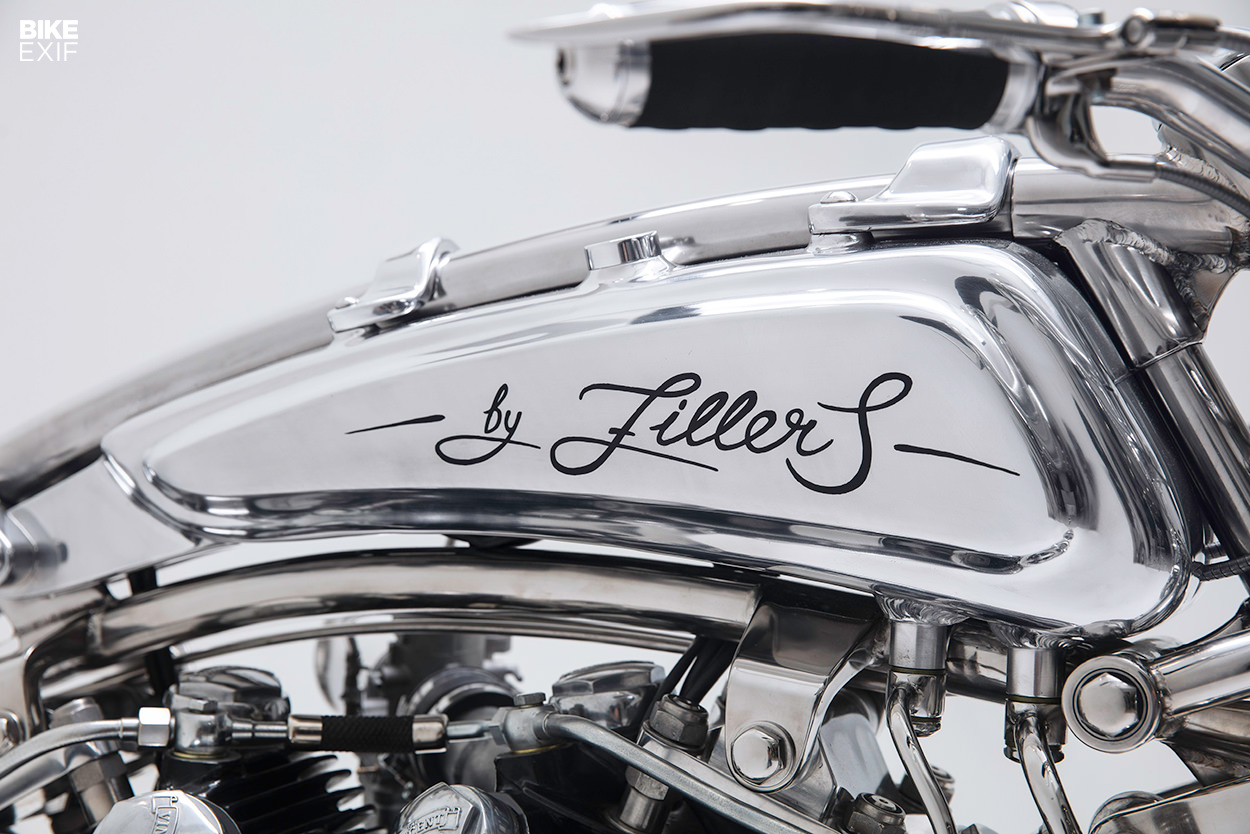 That single tube then curves over the split tank, with a second tube right underneath the tank, carrying brackets that mount to the cylinder heads.

The bars alone are a work of art, curving like antelope horns, and graced with slender levers—in sharp contrast to the engineering complexity immediately beneath. 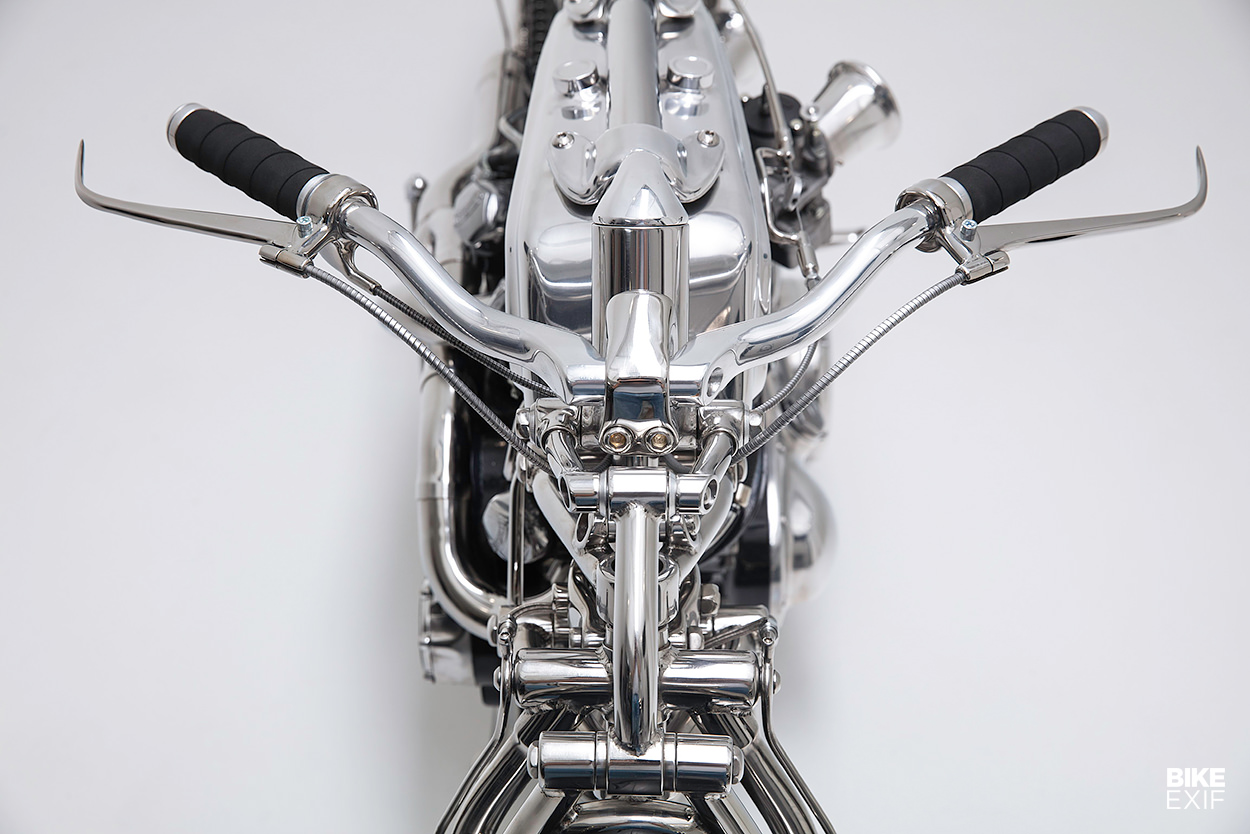 If you’re keen to see this extraordinary machine in the metal, patience is called for. It won’t be revealed to the wider public until October 2020, at the next biennial AMD World Championship in Cologne, Germany.

That’s a long time to wait, but it’ll be worth it. We just hope the AMD judges feel the same way. 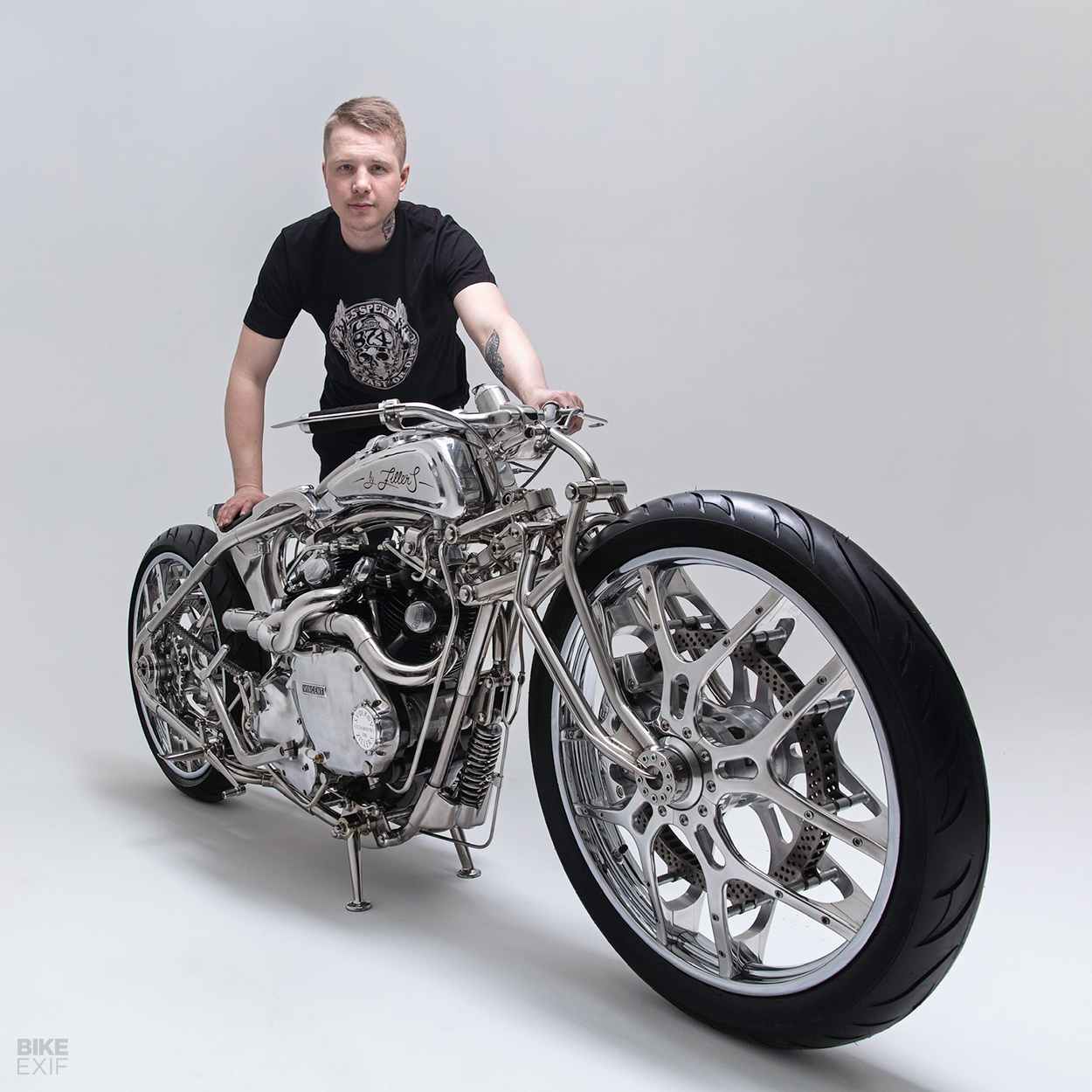