Building a Bike purely for show has its advantages. There’s no need to worry about whether it runs, steers and stops, and there’s no need for the usual legal accoutrements; as long as it looks pretty, you’re good.

But if you’re Roland Sands, that’s hard to do. With years of experience racing and building bikes, creating something unrideable is simply not in his nature. So when a friend commissioned RSD to build a bike to display in one of his stores, Roland and his team pulled out all the stops. 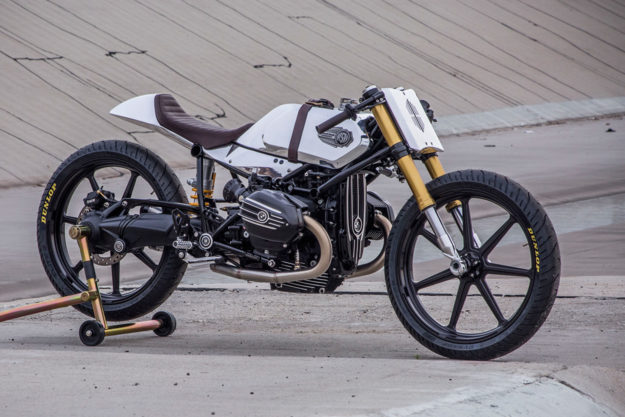 RSD’s client is a big BMW fan, with quite a few unique cars and bikes in his collection. Naturally, the guys picked a brand new BMW R nineT as the donor.

“He was really into the board track direction,” says Roland, “so we blended that idea with a bit of café racer flavor to come up with something in between.” “This bike was a close cousin of the Indian we did a while back that had a similar shaped gas tank. But with the BMW we wanted to keep all the suspension modern and fully functional, where the Indian was a rigid with a girder fork.”

To get the board tracker vibe just right, the team fitted a pair of gorgeous 21” Morris wheels from their own catalog. But swapping out the wheels alone wasn’t going to cut it, so they tore into the frame too. They started by chopping the neck, raking out the front end to make the big wheel fit with the stock forks. Then they trimmed all superfluous mounts off the frame, and rebuilt the back section to flow with the new bodywork.

Rounding out the chassis package are a GP Suspension cartridge kit for the forks, and a new Öhlins TTX rear shock. In true tracker fashion the front brake’s been ditched, but the rear’s been upgraded with a custom Spiegler brake line. A set of Dunlop Elite 3 tires keeps the Beemer on the asphalt. Moving to the bodywork, RSD chief fabricator Aaron Boss whipped up a new tank and tail section, along with a front board and side panels. The stock fuel pump’s still in use; the guys fitted it into the new tank by way of a few custom machined parts.

That tank’s also adorned with a pair of RSD badges, a handsome cast aluminum gas cap from Crafty B, and a period correct strap. Bitchin’ Seat Company handled the nineT’s new perch. Lower down, the team executed a top-level tidy-up job. The airbox is gone, replaced by a pair of RSD velocity stacks. And there’s a hidden box behind those side panels, which holds the BMW’s huge pile of stock electro bits.

There’s also a Rapid Bike Race Tuner to help boost performance, and a CXRacing oil cooler (hiding behind the number board, and plumbed with custom lines). The exhaust is pretty killer too; it’s a custom two-into-one-into-two stainless steel system, terminating in a pair of RSD mufflers. They’re held up by an exquisite bracket, mounted low down on the frame. RSD are gearing up to release their new “Machined Line” series of R nineT parts (which will also be available at BMW dealers), so they’ve pillaged the catalog here. The valve covers, oil filler cap, frame pivot plugs and engine breastplate are all from the range. RSD also ground down the engine casing fins to carry through the theme. Other RSD bits include the foot pegs and controls, clutch master cylinder and leather-wrapped grips. The control area is super-sano, thanks to a custom-made triple, in the style of that on the original Concept 90. And the only switches needed—ignition and start—have been moved to the side panel.

It’s an incredibly tidy build, emphasized by the basic and striking finishes. And the fact that there was no need to put it through a roadworthy test helped too. “It’s a concept board tracker build,” says Roland. “No front brake. No kickstand, no lights, and completely inconvenient for everyday use—outside of the fact it’s a BMW, and will fire up every time and run forever.”

But is it actually any good on the road? “It’s a blast. It’s quick and steers well, you just have to watch your ass with no front brake…and with that I’ve opened myself up for some solid stage dive commentary!” Is Sobriety Boring You To Tears? Here Are 7 Tips To Help You Break Out Of Your Sober Funk.