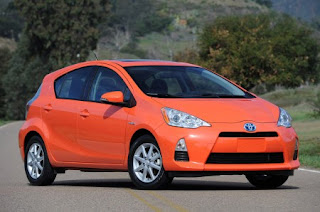 Toyota is pretty sure that its expanded Prius family will drive up sales of the world’s best-selling hybrid, and the early sales returns indicate that the company is right, right, right.
After the Prius V sold about 8,400 units in the U.S. in the first ten weeks, the smaller, cheaper and more efficient 2012 Toyota Prius C is also getting a lot of attention. Toyota announced today that the C Sold 1,201 units in just the first three days it was on sale. That’s enough to make it “one of Toyota’s fastest-selling vehicles,” according to the automaker, which also pointed out that those three days of sales is more than either the Nissan Leaf or Chevrolet Volt sold all last month.
If anything, those 1,201 sales are not as impressive as the C managed in Japan (where it is badged ‘Aqua’) – Toyota obtained 120,000 orders in the first five days it was on sale, though it isn’t immediately clear how many units have actually been sold. So far, the newly expanded Prius family has sold almost 10,000 units in the U.S. through the first half of March. This certainly points to the Prius franchise doing well in 2012. Last year in the U.S., Toyota sold 136,463 examples of its Prius Liftback (it sold 140,928 in 2010) and expects to sell 220,000 Prius models of all types here this year.