Mick Jagger and fellow Rolling Stones, Charlie Watts, Ronnie Wood, and Keith Richards are as vibrant as ever.  The Rolling Stones are recording a new album their first since 2005 with Eric Clapton contributed to the effort as special guest.  And they are back on tour again with three dates in the USA including Las Vegas.

The Rolling Stones are releasing a new album later this year that promises to be heavy blues like the band's original sound.  It has been over 10 years since their last release "A Bigger Bang" so this album is greatly anticipated.  They are also back on tour in 2016 with two shows at the Empire Polo Club in Indio California on October 7th and 14th and a show in Las Vegas on October 19th at the T Mobile Arena.  The "Lucky Dip" Las Vegas Show quickly sold out as could be expected for the Sin City.

In 2016 they performed 15 stadium shows in Latin America the "Ole Tour" including Santiago, Buenos Aires, Montevideo, Rio De Janeiro, São Paulo and Porto Alegre with Lima, Bogotá and Mexico City and Cuba - from February 1 through March 25th.   Their 2015 "Zip Code Tour" had 17 Stadium dates in North America including San Diego, Columbus, Milwaukee, Dallas, Nashville, Raleigh, Orlando, Atlanta, Pittsburg, Kansas City, Indianapolis, Minneapolis, Detroit, Buffalo, and Quebec.  They performed 29 shows in 2014 the "14 On Fire Tour" that included Perth, Melbourne, Sydney, Auckland, Tokyo, Oslo, Zurich, Berlin, Paris Vienna, Rome, Madrid, Stockholm, Tel Aviv, Abu Dhabi, Macau, Singapore Shanghai and other cities,  In 2012 and 2013 their "50 Years and Counting Tour" had 4 dates in Paris and London, 23 dates in North America including Montreal, New York, Newark, Las Vegas, Oakland, San Jose, Chicago, Boston, Philadelphia, Washington DC. Los Angeles, Anaheim, and 3 dates in England ( 2 in London ).  They performed the historic Havana Cuba Concert for free making that event a really great one for the people of Cuba who never had the chance to attend a rock and roll concert. In just the last 4 years the Stones have been almost everywhere - so they can hardly be accused of forgetting their fans and where they are.

In all they have performed over 5000 gigs since 1963 when they first toured in England performing 17 concerts in just the 35 days. Since then as young men adventuring in music and now seasoned veterans the Rolling Stones have become the definition of Rock and Roll. Front man Mick Jagger has driven the band over 5 and a half decades never becoming out of fashion and always on the cutting edge of Rock and Roll.  In the late 90s it was reported that the Stones could not quit touring because they were so far behind in taxes that if they were to stop they would become bankrupt.  None-the-less, these guys love what they do and they are loved for it across the world so they tour and perform because that is their life.

A special artistic event "Exhibitionism" that first was staged in a London Museum in April of this year will travel to New York City in the fall.  The Stones and Exhibitionism features stage clothing, classic album artwork, vintage gear, guitars, drum sets, photography, stage designs, personal diaries, "We've been thinking about this for quite a long time but we wanted it to be just right and on a large scale," Mick Jagger said in a statement. "It's not going to be like walking into a museum. It's going to be an event, an experience. It's about a sense of the Rolling Stones – it's something we want people to go away talking about it.”  Visitors will Experience the band and their iconic music, as never before with behind-the-scenes footage, a recreation of the band's first apartment and more memorabilia. The unique exhibition will be at the West Village's Industria Superstudio in November, the first stop on what's being billed as the largest touring experience of its kind ever to be staged. 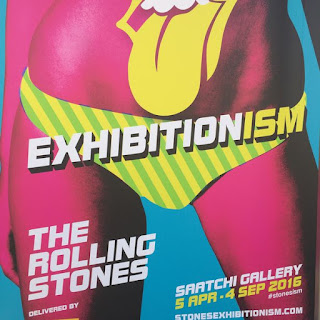 Click here to buy our rock and roll collector neckties 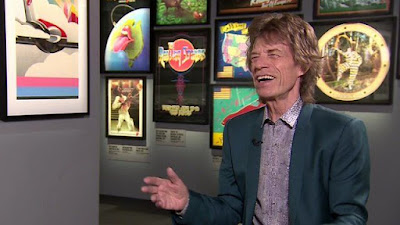