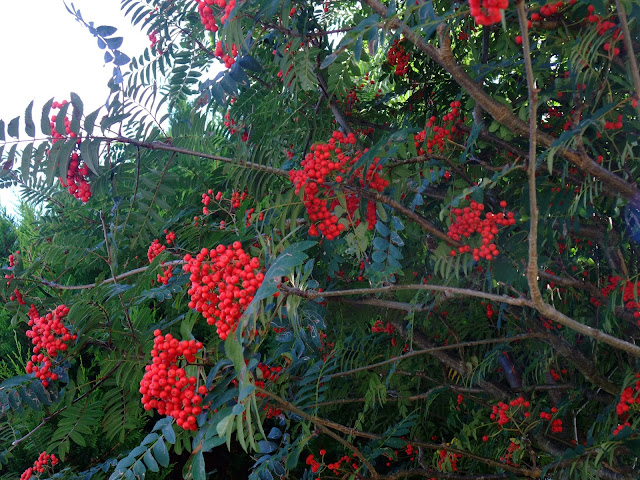 Rowan berries have one of the highest levels of carotene, even more than carrots do.
They are a source of vitamins C, B, E, sorbic acid, which is a natural preservative, disinfectant & anti-fungal agent.

Rowan berries has been used in the treatment of kidney disease, diabetes, rheumatism, gout , arthritis & constipation.

Other uses include correcting the way the body processes uric acid & increasing metabolism.

The fresh juice of the berries is a mild laxative & helps to soothe inflamed mucous membranes as a gargle.

Rowan bark has astringent qualities & can be used as a decoction for helping cure irritable bowels & vaginal irritations .

The fresh berries contain an acid that, when taken in large amounts, can cause stomach pain, queasiness, vomiting, diarrhea, kidney damage & skin rashes. Drying or freezing the berries eliminates much of this acid & cooking them destroys it entirely.

As long as you avoid the fresh berries, you are therefore unlikely to encounter side effects.

Collecting them after first frost or freezing cuts down on the bitter taste as well.

Due to its strong & unique taste, Rowan berries are widely used in the food & beverage industry - as a natural additive in confectionary, condiments & alcoholic beverages to flavour liqueurs & cordials, to produce country wine & to flavour ale.

In Russia, Rowan berries are gathered after the first frost, as the fruit becomes more sweet & palatable.

Rowan berries can be made into an excellent, slightly bitter jelly which in Britain is traditionally eaten as an accompaniment to game & into jams & other preserves, on their own, or with other fruits.

Juice: take 1 tsp fresh juice at a time, as needed.

Jam: cook fruit with half as much sugar as berries.
Take 1 tbsp, 3 to 5 times per day for mild diarrhea.

1.8 kg rowan berries, washed & stalks removed
1.4 kg cooking apples, peeled, cored & quartered
450 g sugar for each 600 ml juice
Put all the fruit in a large preserving pan & barely cover with water.
Bring to the boil, then simmer for 20 minutes or until the fruit is soft.
Strain.
Measure the juice & weigh out the correct amount of sugar.
Simmer the juice & sugar over a low heat for 10 minutes until the sugar has dissolved.
Increase the heat & cook at a full boil ca 5 minutes.
When the jelly has reached setting point, lift into hot, sterilized jars, seal airtight.

Use fresh & fully ripe Rowan berries.
Pick them right after the first frost or put them in the freezer for a couple of days.
Frost makes rowan berries milder & sweeter.
Put 800 ml frozen berries in a clean glass jar with tight fitting lid.Cover the berries with ca 350 ml vodka.
Steep for 1-4 weeks or more in a dark place at room temperature.
Shake lightly from time to time.
Strain & filter your infusion into a clean glass bottle or jar with tight-fitting lid.
Store for at least 2 months in a dark place at room temperature before serving. 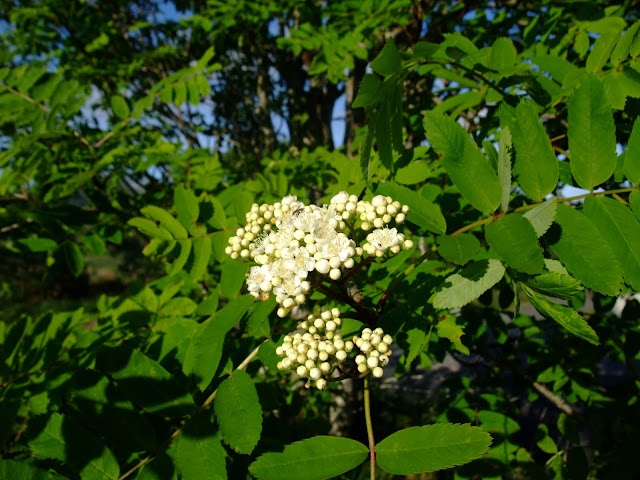 With its high vitamin content & astringent properties Rowan berries have a regenerative & energizing effect on skin.

They stimulate blood circulation & brighten the complexion, while smoothing out fine lines.

Combined with honey, these berries offer a real anti-ageing nourishment for skin, particularly in the winter months.

Mix fresh cleaned & mashed rowan berries with honey.
Spread the micture over the face & neck,cover with wet tissue paper & leave for 15 min.
Wash off with warm water.
For best results do it for about 2 weeks.

In Scotland, the cross-beams of chimneys were often made of rowan wood, which was seen to be protective & on the Solstices & Equinoxes, rowan sticks were laid across the lintels to reinforce beneficial influences.

Uses of Rowan in protective magic include carrying Rowan twigs on sea voyages to protect the ship from storms.

A Rowan Tree planted near your home will protect it from lightning.

This Tree was said to bring luck to families & was, therefore, planted next to or near new dwellings or after a move to honor the new home & to aid in starting a family.

Sprays of branches were tacked over the door of cattle sheds to protect them from harm, a practice carried to the home for the same purpose.

Sprigs were also worn to protect the wearer from enchantment.

In the spring, goats were driven through hoops of Rowan, again, as a protective practice.

In Wales, the Rowan was planted in graveyards to watch over the dead & to prevent them from walking & was said to protect a cemetery from haunting.

Rowan was commonly used for walking sticks so that the wanderer would be protected from harm & was a prevention against getting lost, guiding the wayfarer home.

Boats made of this wood were said to be protected from storms & from going off course.

The Druids burned Rowan prior to a battle, using the smoke to invite the Sidhe to attend & lend their aid.

Used in all protection spells particularly from fire, or lightning.

In Ireland it was hung in the house to prevent fire charming, hung around the necks of hounds to increase their speed & used to keep the dead from rising.

It also had the power to protect people & animals from evil spirits.

The tree is protective & the classic anti-demon spell consists of rowan berries tied with red thread.

A charm made of 2 small twigs of Rowan wood tied together to form a cross using red thread or yarn can be carried to protect against bad spirits.

Its branches were used by Norsemen as rune-staves upon which to carve runes of protection.

The Celts believed that no witches or evil spirits could cross a door over which a branch of Rowan had been nailed.

In some legends, the Rowan has also been called the whispering tree because it has secrets to tell to those who will listen.

Horses & other animals were protected from bewitching by rowan wands.

In Ireland, a Rowan stake was sometimes hammered through a corpse to immobilize the spirit.

In ancient Ireland, the Druids of opposing forces would kindle a fire of Rowan & say an incantation over it to summon spirits to take part in the battle.

Should you happen upon a flourishing Rowan which is most bountifully hung with cluster upon cluster of delicate red berries, then you may be sure that some saintly soul lies buried close by.

Rowan was the Celtic tree of life. Celts believed that the first woman was a rowan tree & the first man was an alder tree.

Celts believed that a spring of rowan placed over the main entrance of a home would keep out evil. Celts would hang a rowan branch over the threshold of their homes on Imbolc.

Many Celts planted rowan around their home for protection from evil.

Medieval Christians drove rowan stakes into corpses to prevent ghosts, especially if the person died under unusual or violent circumstances.

Often the berries & the bark are added to healing mixtures to ensure their success & the ingestion of the berries is said to add a year to your life.

Worn as a protection against enchantment, especially where the Fairies or the Sidhe are concerned & carrying it in an amulet can ensure against the control of others.This amulet is a combination of Rowan leaves with Rue & Basil, tied into a golden or a white cloth & carried. It is traditionally sewn into sachets, along with other powerful herbs, to bring health, power, luck & success, especially in & undertaking involving travel far from home.

Forked branches were used as metal-diviners, much the same way Willow is used for water divining.

In the Amber Isles of the Baltic Seas, great stands of Rowan were used as places of oracle & divination.

As attractive as Rowan is to the Fey, Rowan wood is often used in butter churns so that the butter would not be overlooked by evil Faeries.

In divination, Rowan is an indication to retain your senses & gather your wits about you to enable you to distinguish the bad from the good, harm from help & to use spiritual strength to avert that which would threaten your serenity & purpose.

Rowan is the realization of greater potential which purifies & protects against the circumstances & conditions of life. 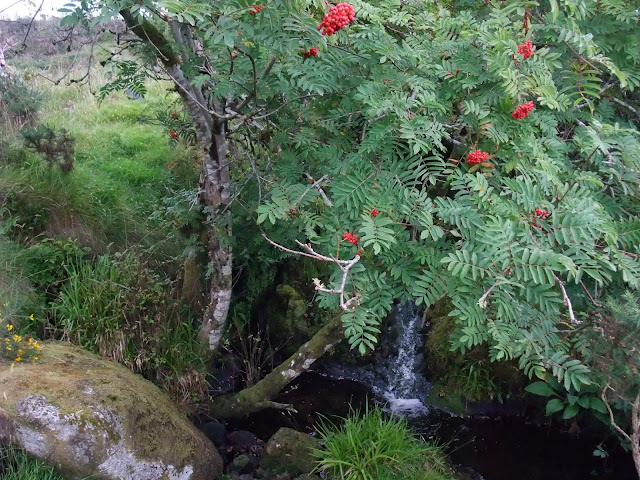